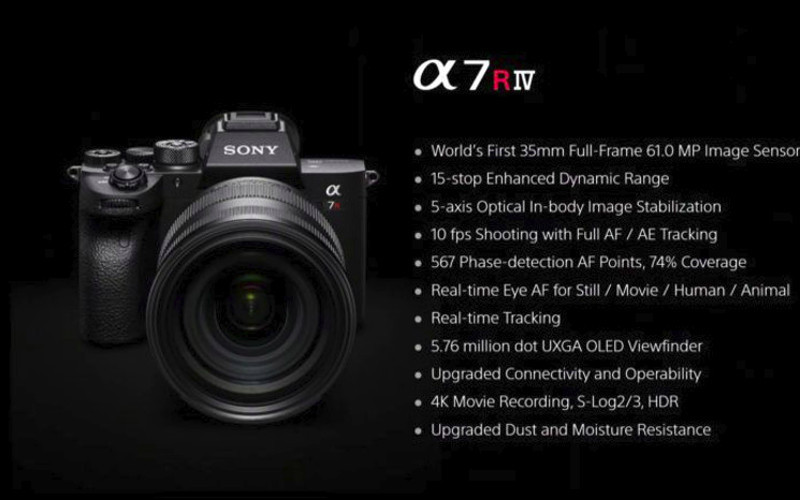 Sony is setting the standard as a leader in the increasingly competitive full-frame mirrorless camera market. The company has unveiled the Sony a7R IV with a monstrous 61-megapixel image sensor.

According to Sony, the new a7R IV raises the bar for image quality and operability standards for cameras. The a7R IV packs a brand new BSI CMOS image sensor which makes it the first true sensor upgrade for Sony’s Alpha range of cameras since 2015.

Sony’s a7R IV comes with a 61-megapixel sensor but can produce 240MP image files using the in-built sensor-shift multi-shot mode. Furthermore, users can get 26MP photos even in the APS-C mode, which the company says is the “highest resolution APS-C capture today.”

The camera offers 15 stops of dynamic range as well as five-axis image stabilization. Sony says the new sensor enables an extreme level of detail even with deep image zooming.

The a7R IV’s predecessor, the a7R III, has a 42.4MP sensor, which is smaller than products like Panasonic’s S1R – 47.3MP and Nikon’s Z7 – 45.7MP. With camera trends steadily shifting from DSLR to mirrorless, Sony buttresses its claim as the innovator in the market with the a7R IV.

The Sony a7R IV features the company’s signature eye-tracking for both humans and animals. Its sensor-shift multi-shot mode combines 16 separate pixel-shifted images which amount to 963.2 million pixels of data to create 240MP image files. The a7R II lets you shoot 26MP photos even in APS-C mode.

When in full-frame mode, the autofocus system provides 567 phase-detection AF points which cover 74% of the image area. Whereas, only 325 phase-detection points almost entirely cover the APS-C area when in APS-C mode. This translates to almost 100% vertical AF coverage and over 100% horizontal AF coverage.

The a7R IV guarantees an extreme level of detail as it offers the same Real-Time Tracking AF as in the a9. Furthermore, instead of the 61MP making this camera really slow, Sony says it’s capable of shooting up to 10fps at full resolution with continuous AE / AF tracking for up to 68 images.

The new Alpha-series camera features Real-Time Eye AF for videos, the first in one of the company’s cameras. The camera captures full-frame 4K videos oversampled from 6K. It offers a full-pixel readout in Super 35mm crop or a pixel-binned signal from the full width of the sensor.

The audio recording system also got some impressive enhancements. The a7R IV packs a brand new digital audio interface that captures a digital audio signal. Sony is introducing two new accessories to utilize the new system – an ECM-B1M shotgun mic and an XLR mic adapter kit. The new ECM-B1M mic features a built-in analog to digital converter and a brand new multi-interface hot shoe found only on the a7R IV.

Other enhancements include an ultra-high-resolution 5.76M-dot electronic viewfinder, a redesigned grip, and dual UHS-II SD card slots. The new a7R IV has enhanced resistance against dust and moisture, supports USB Type-C for tethering and high-speed built-in WiFi with a wireless tethering option.