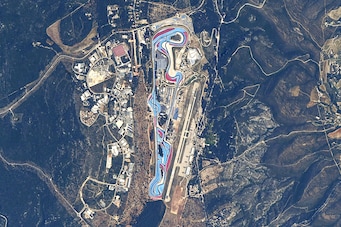 Growing up in Detroit, Drew Feustel, a NASA astronaut, became an avid car and racing fan. Feustel is so enthusiastic about car racing that he photographed race tracks from space while leading the International Space Station in 2018. He also watched the various car racing series in his free time.

As a long time racing fan, Feustel follows several car racing series including MotoGP, IndyCar, and Formula One. He told Hot Rod Network in a recent interview that he keeps up on each series, the teams, as well as the drivers. To show how much of a fan he is, he also spent time in space following the entire 2018 season.

He also took pictures of all the race tracks from his post at the international space station using a Nikon DSLR. Feustel said that he would then post the picture of a racetrack that’ll be used on each race weekend before watching the actual race. That was a hobby for him while up there.

Feustel explains to Hot Rod Network that it took a lot to shoot the race tracks from space. To shoot a particular race track, he provides the racetrack coordinates to ground support teams at mission control. Then, people here on Earth would do all the calculations to tell Feustel exactly where a race track will be and when he could get a great shot from his vantage point in the International Space Station.

What it’s Like to Shoot Racetracks on Earth During Spacewalk

Feustel says that he took the pictures in his spare time. He took photos at nights, on weekends or whenever he knows he will be flying over a track. He had a 5-minutes window to get a clear shot as he passed overhead a track. Armed with information on the right time and place, he would plan his day so that he had some free time to catch a track, and then get back on with work. He said that was he was able to capture all of them.

Feustel took pictures of the race tracks using a Nikon D5 with a 2x teleconverter and an 800mm lens. This means that he has a 1600mm focal length lens. He took advantage of it using manual focus and other manual camera settings.

Feustel added that it was tricky framing the shots because the tracks were actually not visible to his bare eyes. The International Space Station which is located 250 miles (402.34 km) above the ground, orbits the Earth at 17,500 miles (28,163.52 km) per hour. From his position in space, up to 30 tracks could fit into the coverage area of the camera lens. This made capturing particular small area on the ground very, very difficult.

Hence, he had to point his camera in the right spot and use the viewfinder to locate a race track. Feustel tells Hot Rod Network that there were many times when he couldn’t see the tracks. At times, he completely missed a track as a result of pointing his camera in the wrong place. However, Feustel was resilient. He patiently continued until he succeeded in getting all the racetracks on his list.