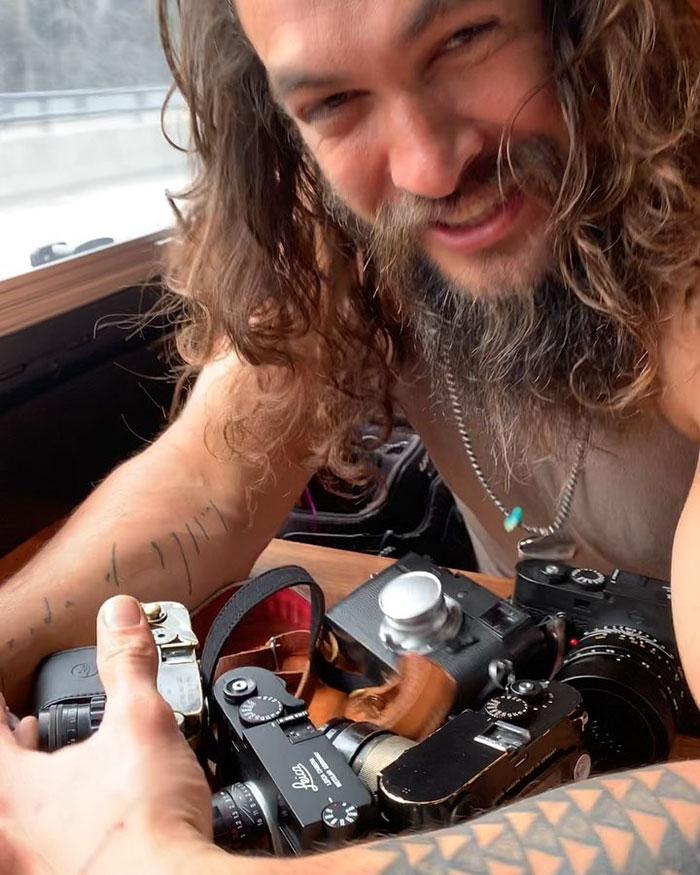 In recent social media posts by Jason Momoa, the actor who plays the main character in the popular Aquaman movie, a collection of Leica cameras, owned by the actor, was shown off. Jason is most certainly not the first celebrity to take a liking to the Leica Camera brand but does seem to have quite an obsession with this magnificent range of cameras.

Jason is not the first in his family to be passionate about photography and the art behind this hobby. Jason’s mother was also a photographer.

A post made by Jason this week on Instagram quickly went viral. In the post, Jason showed off some of his most prized possessions – a collection of Leica cameras that he holds dear to himself. Jason also mentioned that he is excited to work on a new project, along with a film, and that the next few years will be filled with art. Following this news, Jason also thanked a number of people in the post that inspired him and those who initially introduced him to the series of cameras produced by the Leica brand.

At the moment, further details have not yet been shared. Fans of Aquaman’s star Jason Momoa are excited and will surely be keeping their eyes on his Instagram account, along with his other social media accounts to ensure they can find out more about the upcoming projects that the celebrity is now working on.

Speculations have been made that Jason will be working with Leica cameras shortly in the future. No official announcements have yet been made, but we are hoping to find some news on Jason’s wall or perhaps even on Leica Camera’s official account soon.

What we do know is that Jason does have a passion for the Leica Camera brand. He is known to own several of the latest camera models from the brand, including the Leica Noctilux, along with the Leica M10-D. We have seen the actor appear with both of these cameras on photographs that were posted on his Instagram account in the past.

Additionally, the actor has also been seen showing off a couple of vintage Leica cameras. In past photographs, Jason was observed with the 1958 Leica M2 camera, as well as the vintage 1930 Leica Leitz 73mm lens, two products produced by the company that was quite popular at the time.

Apart from featuring Leica cameras on his own Instagram feed, we have also seen Jason on the official Leica Camera Instagram feed over the last few years, often in behind-the-scenes moments where he would be goofing off between scenes.

As we have noted before, Jason is certainly not the only celebrity to have a passion for the Leica Camera brand. For many celebrities today, owning a collection of these cameras are becoming somewhat of a status symbol. We have seen Lenny Kravitz and Seal, among others, show off their collections on their social media accounts as well.