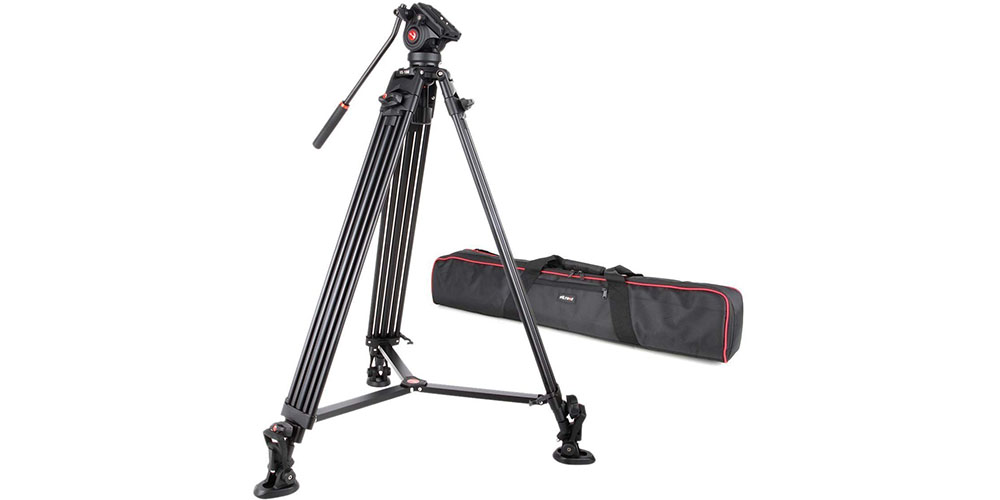 This tripod by VILTROX features elements that are commonly found with other high-quality tripods that aren’t specifically geared toward heavy-duty cameras. Some of those features include a 360-degree panoramic mount and a quick-release plant for fast mounting and removal of any compatible camera.

Photographers who need a tripod that can support a maximum weight of 22lbs should go for the VILTROX VX-18M Professional Tripod as it has the quality construction and features to beat out the competition.

Not only can the tripod support some of the biggest beasts in the camera department with long-range zoom lenses, but the tripod can also provide comfort and ease of mind with the safety designed into it.

The VILTROX VX-18M Professional Tripod is constructed out of high-quality aluminum that won’t buckle under the weight of any camera and lens combo and won’t dent easily when used out in the field or around the studio.

The tripod comes in at a total weight of 9lbs and a folded length of 35.4″. A minimum operating height of 33″ is easily attainable with the VILTROX VX-18M Professional Tripod. The max operating height of the tripod is a tall 74″ and has a max camera weight of 13.2lbs. However, the tripod has been tested by the manufacturer and it was found by them to support a higher total weight. Officially, the tripod can support a camera that weighs a maximum of 22lbs.

As mentioned in an earlier paragraph, this tripod holds several features that can be found in some of the best tripods that aren’t specifically made to be heavy duty. The tripod features a 360 panoramic mount for crisp panoramic photos as well as a tilt range of 90 degrees forward and 80 degrees back.

The VILTROX VX-18M Professional Tripod has a 60mm base plate that is located underneath the damping head. This 60mm bowl is accessible after removing the damping head and provides a wider range of photography and videography angles with less adjustment.

Two nice qualities that this tripod has over competitors is that it comes with a carrying bag, all the required tools, the fluid head, and a panning handle. A panning handle is used, of course, to pan the tripod in the desired direction for videography shots or for photography shot adjustments. Panhandles aren’t often included with tripods and is one of the most unique side features of this tripod.

The VILTROX VX-18M Professional Tripod in Use

The VILTROX VX-18M Professional Tripod is a game-changer when it comes to heavy-duty professional tripods. This tripod is sturdy, doesn’t move on its own, and is easily secured when setup. A second, equally wonderful quality when compared to the included panhandle, is the horseshoe footpads. The horseshoe foot pads provide excellent slip protection or movement protection.

The VILTROX VX-18M Professional Tripod doesn’t easily compare to most competitors as it is prominently positioned well outside of the pack for two main reasons. One, the tripod is a heavy-duty tripod and is for those who have a heavy camera or a regular camera with a heavy zoom lens attached to it. Two, the tripod doesn’t share features with other tripods due to the fact that it is specifically catered to heavy camera rigs.

The tripod can’t be knocked on the fact that it doesn’t have an option to mount a camera inverted because of the mid-level spreader that provides support and stability to heavy camera setups.

A tripod that shares similar qualities to the VILTROX VX-18M is the GEEKOTO 77″ tripod. Both tripods have a focus on the rugged outdoors with an aluminum construction that provides damage resistance and less overall weight.

However, the VILTROX VX-18M is superior with its mid-level spreader and horseshoe feet. Sure, the GEEKOTO 77″ tripod is lighter weight, can convert into a monopod, and can fold into a compact 19″ bundle, but it can’t beat the VILTROX VX-18M.

In conclusion, the VILTROX VX-18M Professional Tripod is the one to go for when in need of a sturdy tripod that can support a heavy rig. This tripod is perfect for the serious photographer or videographer who has a bulky camera setup. The features that the tripod holds puts it above the rest of the heavy-duty tripod pack.

8
Score
The VILTROX VX-18M Professional Tripod is one of the best heavy duty tripods available on the market with its sturdy design and mid-level spreader that adds a superior level of stability.