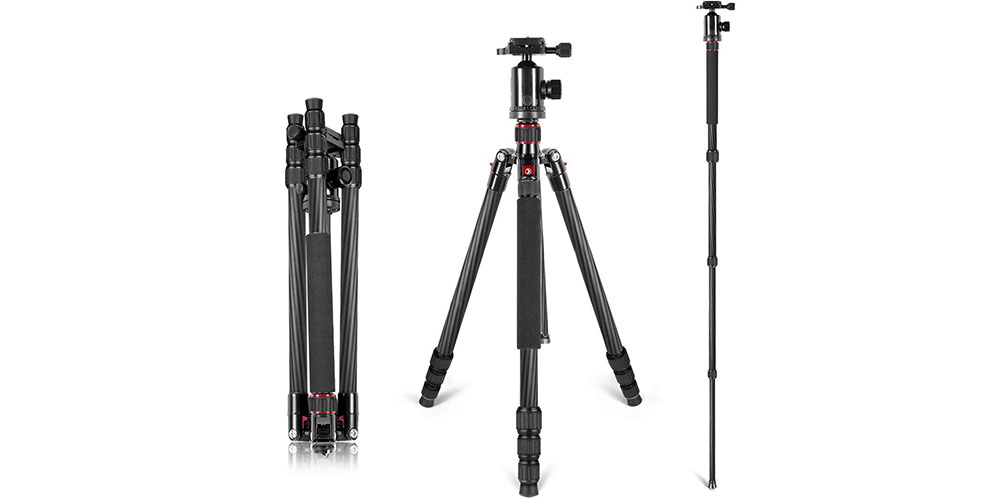 The Neewer Carbon Fiber 66″ Tripod is a classic example of how material of an extreme quality, namely carbon fiber, can create a wonderfully lightweight product. This tripod is one of the most lightweight and durable tripods out there due to its bulk construction out of carbon fiber.

However, this tripod isn’t one of the best tripods out there just solely based on what it is made out of as this tripod is a veritable cornucopia filled with tripod features. A net weight of 3.4lbs and a folded height of 19.3 inches proves that this tripod is ready to be taken to the outdoors where traveling as lightweight as possible is crucial.

The Neewer Carbon Fiber 66″ Tripod is constructed out of the widely known, high-quality material, carbon fiber. Specifically, the legs are made out of high-density carbon fiber tubing with eight layers of different angles.

One of the benefits to carbon fiber construction is the ability to be as lightweight as possible. The total weight to the Neewer Carbon Fiber 66″ Tripod is only 3.4lbs, with a maximum load capacity of 8.8lbs, and the ability able to be folded down to a height of 19.4 inches.

The Neewer Carbon Fiber 66″ Tripod in Use

The Neewer Carbon Fiber 66″ Tripod is an excellent and easy tripod to use in the studio and out in the field. The monopod mode to the tripod lets it become a free-range, hand-held tripod mount that can be moved across the studio with ease or used as a walking stick when hiking and walking on trails.

The legs to the tripod feature interlocking twist-lock legs for quick unlocking and anti-skidding to the legs is accomplished through very pointy spikes on the bottoms to the leg feet.

A low center position on the center column leg is possible with the conversion to an inverted camera mount. This mount is a critical feature for macro photographers and all photographers in general if they want the ability to capture photos from a low angle.

The Neewer Carbon Fiber 66-inch Tripod legs can be moved into adjustable angles for flexible shooting in environments where all the legs can’t be set at the same angle due to obstacles in the outdoors. An ultra-low height mode is also possible with the tripod which allows for all three legs to sit perfectly flat on a flat surface.

A minor drawback is the quick-release twist locks found on all of the legs to the tripod. This can be considered a quick-release system, but it isn’t quicker when compared to a buckle-lock release system. However, if one needs to be quieter, for wildlife photography, the twist locks would be the way to go as buckle locks can sometimes snap open with a sharp sound.

A tripod that is similar to the Neewer Carbon Fiber 66″ Tripod is the Zomei 55″ travel tripod. This travel tripod shares the same compact nature and rivals the Neewer 66″ with buckle-lock quick release legs. However, the latter tripod does not hold a candle to the Neewer tripod as it already doesn’t have a high-quality material up to bat for it.

The Neewer Carbon Fiber 66″ Tripod is the clear winner when compared to the Zomei 55″ tripod. Sure, the buckle-locks on the Zomei can shave off some considerable amount of time when the setup time over one day is added up, but the overall quality of it isn’t enough and it is missing some features as well.

All in all, the Neewer Carbon Fiber 66-inch Tripod is the sure way to go as it holds the highest-quality material and way more features.

In conclusion, the Neewer Carbon Fiber 66″ Tripod is one of the best tripods for use in the studio or use out in nature. The tripod comprises a high-quality carbon fiber material that was constructed in a delicate, and precise manner.

Features of the tripod are its main selling points as it boasts a wide variety of highly desired qualities. A monopod mode that can be achieved in a matter of minutes, an inverted camera mount mode for macro photography and low-angle photography, and the panoramic mount for perfect 360-degree panoramic photos are only some of the amazing features that this tripod exhibits.

8
Score
The Neewer Carbon Fiber 66" Tripod is a wonderful tripod that can be used indoors in a photography studio and outdoors in some of the harshest terrains. It features a monopod that provides a double use as a hiking or walking stick and can, of course, be used as a freely traveling hand-held mount for photography both in and out of the studio.