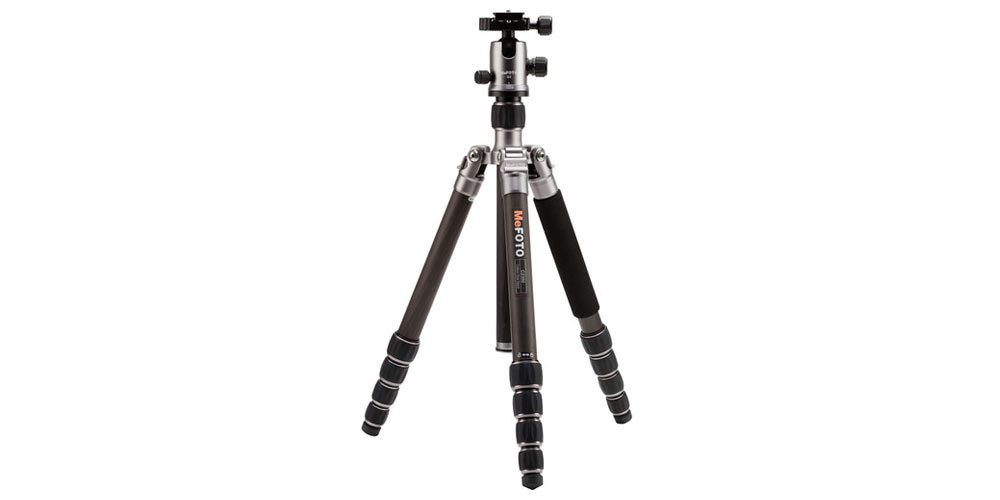 The MeFOTO GlobeTrotter series of tripods are the heavyweights in the MeFOTO lineup, coming in aluminum or carbon fiber versions and a range of funky colors. Although the tripods are designed to hold heavyweight DSLR setups, they are still compact travel tripods.

The one reviewed here is a carbon fiber version and just like the rest of the MeFOTO lineup, it’s built out of top quality materials, can take on all conditions and probably last you a lifetime. Compared to some of its competitor’s carbon fiber offerings at the top end of the market, this tripod comes in very reasonably priced. It’s also got the benefit of being able to be used as a monopod.

On the surface, this tripod has all the bells and whistles that come with a more expensive model like the Gitzo GT1555T Series 1 Traveler. It has carbon fiber, quality locks, and solid aluminum joints. The MeFOTO GlobeTrotter has employed twist locks, just like a Gitzo with rubberized grips. They do exactly as intended, but the Gitzos just feel like they have that extra bit of quality. Then again, you’re paying nearly three times the amount for a Gitzo.

Each twist lock just needs a small turn to release and unlock again, making setup very quick and easy. The tripod also comes with a well made sling-style, carry case which is just big enough to fit in the tripod and really not much else. It comes free with the tripod so no arguments there.

Specifications for the MeFOTO GlobeTrotter include the maximum height as a monopod being 170cm/66.9 inches, maximum height as a tripod 163cm/64.2 inches, folded length being 41 cm/16.1 inches and weighing in at 1.7 kg/3.7 lbs. The tripod is also set to have a maximum load of 12 kg/26.5 lbs and comes with a five year warranty.

The MeFOTO GlobeTrotter tripod legs are made of carbon fiber with aluminium joints all-round. The legs all have rubber feet, which can be screwed out to another half-inch and can be replaced by the included steel spikes.

There is a manually pushed-in lock to set the leg angle, not spring-loaded like a Gitzo. This takes a bit of getting used to, to remember to push the lock in and pull it out again on release. There are two angles to choose from when locking out the legs. The first is 30° and the other one, giving a much wider spread of around 60° if you want to get really low to the ground. There is also an option of a shorter central column which will take the tripod down to 13 inches.

The central joint where the legs connect works very well and is very solid, it’s just not the bulky affair you would find on a Gitzo. Then again, it’s really factoring in the price here and what you get with the Gitzo being more the Rolls-Royce of tripods, with a price doesn’t matter tag.

One addition that is not always on the most expensive of tripods is a center column hook for hanging additional weights to give more stability to the tripod. It’s a simple addition and should really be an option on any tripod.

The MeFOTO GlobeTrotter comes with a Q2 ball head and includes a quick release plate. There’s a small bubble level on the top of the head, which will need to be set before clamping on your camera as it will be obscured once your camera is locked in place.

One definite cool feature is that you can also use this as a monopod. One of the legs has a foam grip which you can unscrew from the main assembly. The center weight hook is loosened releasing the center column, where you then screw the released leg into to make a monopod. This definitely extends the functionality of the tripod, but it won’t necessarily be a complete replacement for a dedicated monopod and you will have to do a default setup of the tripod to fold down to its most compact size.

One interesting inclusion is the MeFOTO GlobeTrotter tripods come in a range of colors. From their website, it seems like the options are blue, red, green, titanium, and black. The color differences are changed on the head, hinges, and locking rings.

Practically, it’s more of a fashion thing or just to look cool, which they do, but there’s nothing like a full black tripod especially when you want to disappear into the background like on wildlife shoots. Also, you find that these colored aluminum products rub off their paint after a time, so a bare metal or black one ends up being the final choice anyway.

The MeFOTO GlobeTrotter is a quality, solidly built tripod, which comes in a range of cool colors if that’s your thing. It has all the elements of more expensive brands and even some they don’t have like the weight hook, conversion to a monopod, and included travel case. Although all the elements are in place, it doesn’t feel like the same quality as a Gitzo, but when you factor in what you’re getting for your money you do get a lot here.

When you think this is only a third the price of the most expensive models, you’re getting a lot of tripod for your money here.

9
Score
The MeFOTO GlobeTrotter Travel tripod comes in either carbon fiber or aluminium construction, with all the elements that you can find from a more expensive model. Included functionality of a monopod, means that this product is definitely value for money.