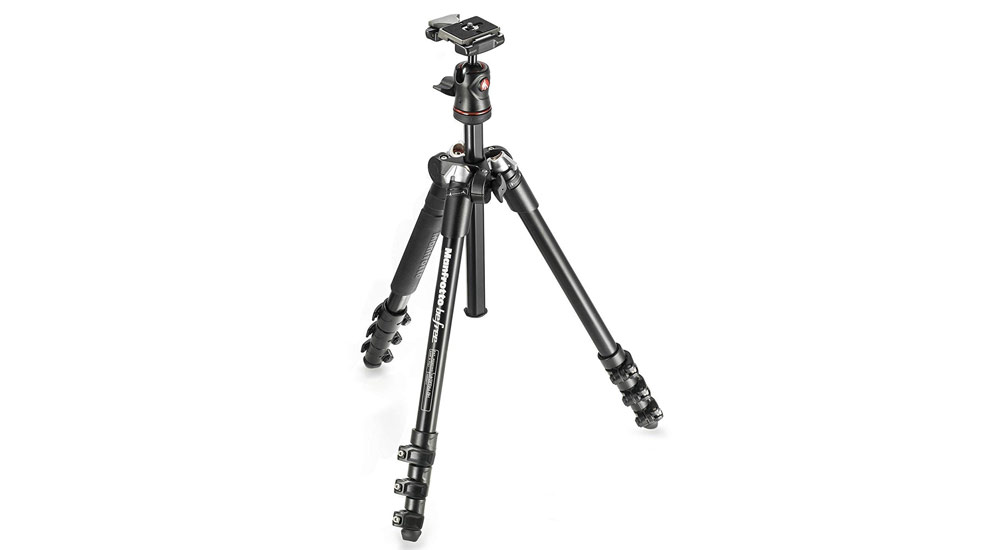 The mechanics of a camera tripod may seem very simple on the surface, but just like a great meal all the elements need to be exactly right to work. A decent tripod needs to be rock solid, work every time, ideally lightweight, quick to set up and take the rigors of everyday shooting. Manfrotto has been a mainstay in producing tripods for many years and offers a variety in carbon fiber and aluminum legs, preferring to stick it to a lever lock mechanism for extending the legs.

The Manfrotto Befree is a compact, reverse-folding tripod with aluminum legs with lever-type like mechanisms for quick extension. You’re not getting ultra-modern carbon fiber, and this is probably to keep down costs. But it also means the tripod is up against a lot of other competition.

Being made by Manfrotto, you are guaranteed a quality design and build which is immediately apparent. The Befree tripod itself packs down quite small, to a convenient 40cm or 15.7 inches. The maximum height goes up to 144cm or 56.7 inches, and with the column down it’s 123cm or 48.5 inches. The minimum total height is 34cm or 13.4 inches. Fully extended, the tripod is tall enough to be comfortable being used by a six-foot frame, while at its most compact it is small enough to grab near to the ground shots.

The weight of the Manfrotto Befree tripod is a reasonable 1.37kg or 3lbs. In reality, this is roughly the same as carrying around a heavyweight zoom lens or camera body, which is liveable. The load limit on the tripod is rated at 4 kg or 8.8 lbs, more than enough for a camera, heavyweight lens, flash, and a few other bits. There are four sections on each leg, with two leg angles. The tripod also comes with a five-year warranty.

Being an Italian make, there a certain level of design detail which you don’t really find elsewhere. This can be just simple things like the red highlights on the mostly black exterior and the design definitely stands out among the competition. 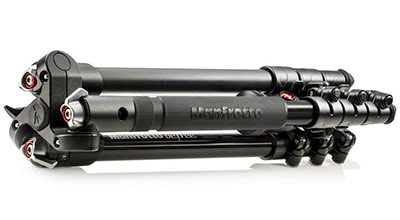 Magnesium alloy has been used extensively, and this is evident with the central hub and the use of the angle selectors. This is very solid and robust with each leg firmly fixed on one side for easy pivoting. The stiffness of the individual pivot points can be changed with exposed screws running from the top to the bottom. The angle selectors themselves are also magnesium alloy and use hex nuts for adjustment.

Like all new products, the legs took a few tries to start becoming smooth in operation and you have to get used to the angle selectors been pushed up before the legs can be rotated to the next angle. These movements take a little practice, but you soon get used to them. The aluminum legs have non-round tubes with solid lever type locks down each one. Having lever-type locks is preferable to twist locks, as they are simpler and quicker to adjust, but that’s just a personal preference. They do seem to work extremely well on the Befree tripod.

The center column is locked down with a huge knob instead of being twisted to lock into place. This is one thing to keep an eye on as if you lose this screw mechanism you cannot walk down the center column until you buy a replacement.

The Manfrotto Befree In Use

With a total weight of only three pounds, this tripod is very lightweight and compact enough to be taken anywhere. The Manfrotto Befree quickly extends with the help of the lever locks. The only initial complication is with the angle locks, which take some practice. You have to first pull down the leg to allow the selector button to be pushed up. The build and design of these look very cool, but they are no quicker or convenient to use than traditional methods, such as push-pull locks.

The ball head is clearly a good addition. But it only uses one control knob for the panning base and to adjust the ball itself. This means that once its un-screwed, it can freely move about requiring both hands to re-adjust. This cuts down the speed of operation, so you will have to try out this feature before buying to make sure it isn’t a hindrance.

The leg lock mechanisms are very quick to set, but they only have one level of pressure as opposed to a turning mechanism where you can dial in as much torque as you want. This means that you have to make sure the leg locks are fully engaged otherwise they will move. The leg locks are robust enough to take everyday pressure and one of the advantages is using cold weather where they can be easily flipped to engage without having to turn constantly as you would with a twist lock to gauge the pressure.

Manfrotto has always produced quality tripods and the Befree is no different. The distinctive Manfrotto design and easy to use leg locks make the tripod easy to set up initially, it’s just the angle selectors which take some practice. Ideally, you will need to pop into your local camera store and play with one of these tripods first to make sure you can live with the angle selectors.

There are some bits missing, like a weight hook, and some would have preferred a fully movable head rather than just a ball head for the money, but the overall design is a very good application. The Manfrotto Befree may not be the most useful application for massive lenses and bodies, but as a portable lightweight daily solution, this is a quality tripod.

8
Score
The Manfrotto Befree is a well-designed tripod with aluminum construction. Its compact design and lightweight means it can be used in many different applications and sturdy enough to last for years.