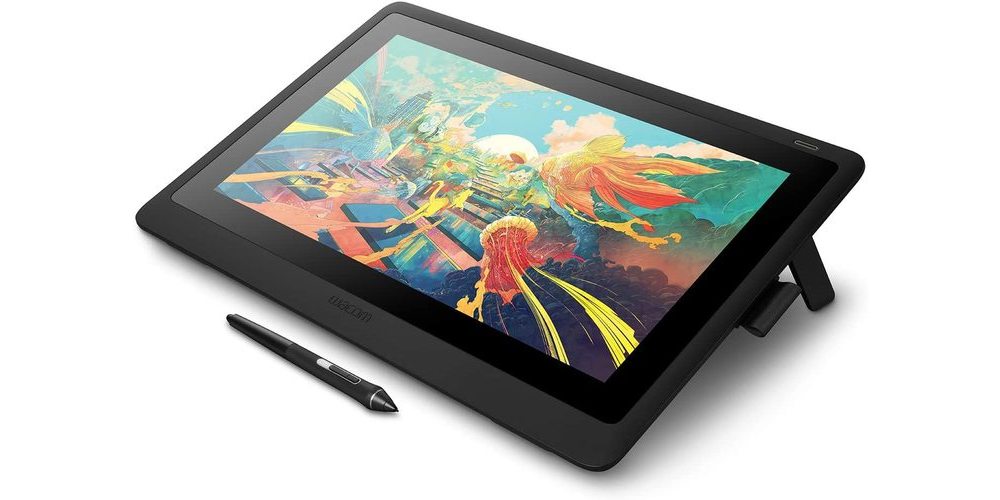 The Wacom Cintiq 16 is one of the first models that gets mentioned for entry-level drawing. It’s not feature-rich, but it gets the job done without hitting your wallet.

With a lot of new competition from other companies, this model may go further down the recommended list. But the most surprising revelation is the amount of competition that comes from the same family of tablets. The Wacom Cintiq 16 is a good, but not great drawing tablet.

Wacom products are always a masterclass of design. The Cintiq 16 is no different, and has the perfect form factor for its size. Consumers get a full 15.6 inches of workspace, more than enough for intensive drawing tasks.

The foldable feet built into the back are convenient but lack many of the angles available when using an adjustable stand. It is a minor quibble that can become a major problem if you have a heavy reliance on the built-in stand.

There are no express keys on the face of the tablet, so prepare to be confused. Part of that confusion is realizing how glorious a Cintiq looks with just the display.

Unfortunately, that feeling wears off once you dive deep into a project and need those actual shortcuts. The bare nakedness of the Wacom Cintiq 16 is an equally refreshing, and frustrating experience.

When you buy a Wacom tablet, the display and pen quality are the biggest priorities. The Wacom Cintiq 16 does not disappoint with its display, sporting a full 1080p. It’s crisp, beautiful, and is shown on a workspace big enough to see subtle differences. You’re looking at a display that handles over 16.7 million colors, with a nice scratch resistant screen.

With all of the compliments, there are some noticeable cons. The Pro version of this model has a 4K screen that is on an entirely different level. After looking at the clarity of the pro version and then going back to 1080p, the quality difference is hard to dismiss.

For any consumer that wants a drawing tablet, 1080p is not a bad resolution to work with. The problem is that the technological jump from 1080p to 4K is so massive, that it’s hard to ignore – this is something that is more recognizable in tools that create over tools that are used to consume media.

Durability isn’t a problem for this particular model. The stand legs are not flimsy, so it won’t fall under the weight of the tablet. When you’re furiously working using the pressure pen, it won’t budge if you have it on a steady surface.

It’s recommended to buy the Wacom Cintiq 16 with a case, or have one purchased separately on hand. Like all tablets, this one is susceptible to damage and will crack on impact.

Overall, the unit is strong, and none of the parts are made from cheap materials. Taking care of the Wacom Cintiq 16 should be an easy feat, even if you’re lugging around a bunch of extra accessories.

This is going to be the hardest thing to judge fairly when comparing the Wacom Cintiq 16 to similarly priced tablets like the Wacom Intuos Pro. You already know the story about the display being 1080p, inferior to the Pro version’s 4K resolution. This was expected before launch but is still a big blow due to this model’s price range.

The Wacom Pro Pen 2 needs no explanation, and is the best piece of hardware in the box. It’s customizable, light and comes with extra tips.

The best news of all is that it needs no batteries and doesn’t need to be recharged. A detachable pen holder is included and keeps everything in place.

Part of the pen’s effectiveness is somewhat nullified by the display, which does not have a laminated screen. This creates minor parallax issues that are not present in the pro version, which is of course laminated.

A 3-in-1 HDMI connection cable is in the box and is one of the most convenient cables you will ever own. The cable is hidden by a lid that can be opened or closed whenever you need to make changes. It’s a slick hardware addition that shows off the flexibility of the tablet.

It’s Wacom, so you already know it is compatible with all of the leading software programs. That is the edge consumers get by purchasing a Wacom product, and the Cintiq 16 continues that trend.

Despite how cut down this model is, compatibility has not suffered. Every program that is compatible with the pro version can be handled by this model, including high-end Adobe products.

Some missing hardware features are available as a separate purchase, so shortcut keys are still compatible. You can buy a Wacom ExpressKey Remote to get the same customization options as the pro version.

To get better angles while working, there are plenty of branded and generic adjustable stands that will work with the Wacom Cintiq 16. When choosing an entry-level tablet, this is about as compatible as you can get with software and hardware.

How Does the Wacom Cintiq 16 Compare?

There are some key differences between the regular and pro versions of the Cintiq 16 tablet. Buyers can justify the cost of the pro version by looking at its longevity.

Out of the box, the Wacom Cintiq 16 is already out of date with what the company has in its current lineup. That leverage slips even more when you put it side by side with the XP-Pen Artist 16 Pro. If you own one of the older Wacom models, then the small bump up to the current generation is a hard sell.

Good, But Not Great

8
Score
Wacom products are so good that they last several years after purchase. They are the Cadillac of drawing tablets, and the Cintiq 16 is a nice purchase. But at such a high price, it’s hard to recommend a tablet that has technology that is obsolete right out of the box.