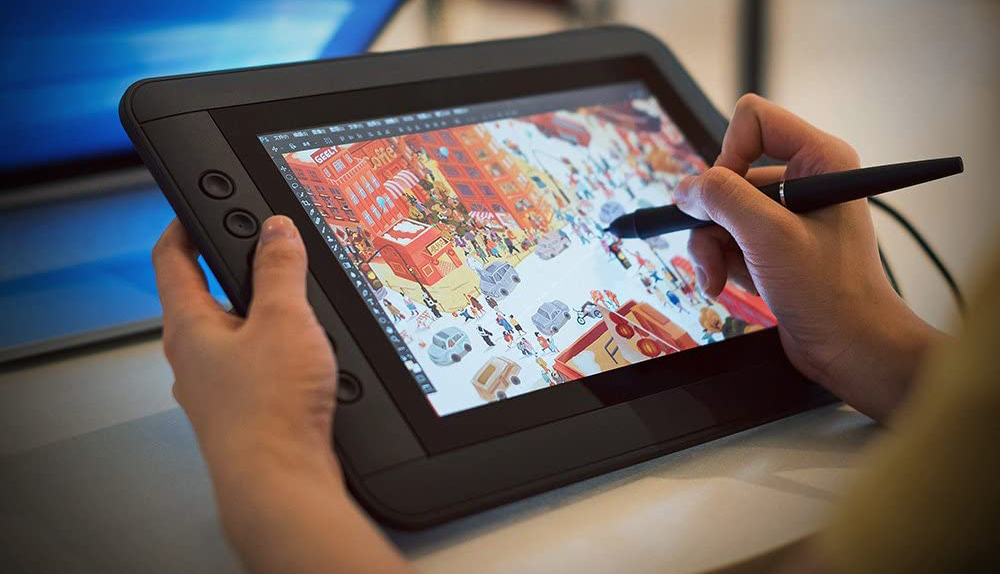 In recent years, digital artists have made a shift from non-display tablets to those that integrate an active area and monitor. One brand that has grown in popularity among users is Parblo. And one of their more recent releases, the Parblo Mast10, has taken the graphic monitor tablet market by storm.

The Mast10 scores high points in several areas. However, its standout feature is its battery-free stylus. Still, it has many other breathtaking aspects that will catch your attention.

The LCD screen of the Mast10 measures 10.1 inches, which is slightly above average. It has a 5080 LPI (1280 x 800) resolution that makes every line you draw appear crystal clear on the screen. The tablet’s viewing angle is two steps below the maximum. So, you’ll see anything you draw over a range of 178° horizontally.

The Mast10 sports an IPS panel and a 75 percent Adobe RGB color gamut. This brings out 16.7 million colors from the screen. The contrast between these colors is top-notch, and just what you’ll expect from a 700:1 ratio. To top it off, you won’t have to squint when using the screen because of its anti-glare properties. However, it has a tuner function that allows you to adjust the brightness of the screen from 30 cd/m2 when drawing in well-lit rooms.

The screen on the Parblo Mast10 is protected with matte film. This protector prevents you from scratching the screen with your pen, while also making the tablet smoother to draw on.

Like we mentioned earlier, the Mast10 comes with a battery-free U-Pen (P58A), that is super light and comfortable to hold. There’s a power switch and clear status LED light that lets you know when the pen is on, so you won’t forget to turn it off when not in use.

The Mast10 pen has a 2048 level sensitivity, which means you don’t have to apply a lot of pressure to draw lines. It also has two side switches for you to register your frequently used functions and shortcuts.

The strokes from the pen don’t change from a normal line to a shaded one when you tilt the pen. So, drawing with it doesn’t fully recreate the experience of using a normal pencil. However, the pen’s response rate of 30ms is fast, and it feels natural.

The Parblo Mast10 is a well-built plastic graphic display tablet. At 1.14 pounds, the sturdy device is somewhat lightweight and measures 11.85 x 8.26 x 0.47 inches. So, you will find it easy to fit in your bag and carry around. It has six express keys that make it easy to get to the functions you use frequently, with one each for ‘undo’, ‘eraser’, ‘hand’, ‘shift’, ‘control’ and ‘alt’. Although it has a 16:10 aspect ratio, you can only use this tablet in landscape mode.

This tablet has rubber pads at the back to prevent it from slipping off your drawing desk while you use it. Also, both left-handed and right-handed people will find it very easy to operate because the screen is rotatable. At the sides, it has USB and HDMI ports, as well as a power switch and a status LED indicator.

The Parblo Mast10 works on a Windows (7 and later) or Mac OSX (10.8 and later) computer. From your PC, you will need to install the driver after uninstalling any other tablet driver. Then the configuration process only takes a few minutes.

You can run both NVIDIA and AMD graphics with the Mast10, which is a pretty cool feature. Also, the tablet allows you to map your drawing to another monitor. This feature comes in handy when you want to loosely sketch on a non-display tablet before touching up the details on your Mast10.

From the Parblo Control panel, you can test the pen’s pressure and calibrate it. The Mast10 is compatible with Adobe Illustrator, Maya, Photoshop CC, 3D Max, Corel Painter, Manga Studio, among many other photo editors.

The Parblo Mast10 comes with USB and HDMI cables to connect to your computer. You’ll also get a mini display HDMI connector and an artist glove, which comes in handy for anyone with sweaty hands! Furthermore, the Mast10 has a pen pouch and wool tablet sleeve with a pen compartment. These make it a lot easier to carry the tablet on the go.

The Mast10 also has Velcro cable organizers and a pen nib case. This case has an built-in nib remover. So, changing the pen’s nibs with any of the 10 additional ones that come with the tablet is quite easy.

Parblo has several products on the market. Sometimes, one is a complete upgrade of another. However, most times, there are only slight differences between the two tablets.

We’ve looked at some of the products available and researched the top ones extensively. One tablet that is often compared to the Mast10 is the Coast10, which is also manufactured by Parblo.

Here are the things we noticed about these two tablets:

Parblo Mast10: A Great Tablet with Some Room for Improvement

The Parblo Mast10 is definitely one of the most useful high-resolution graphics tablets for artists. It has quite a number of top-notch, upgraded features that make it better than many other tablets from Parblo. For one, its battery-free tech is simply amazing.

Nevertheless, there are still some issues, especially with the parallax that occurs when using the pen. The cursor doesn’t line up perfectly with the pen, so you need to calibrate it often or zoom in before drawing lines. Still, the issue isn’t as glaring as in other tablets, and only noticeable when drawing small lines.

The active area could be a little bigger. We also think it is high time Parblo ditched the bezels and just left a screen and a little rubber pad.

7
Score
The Parblo Mast10 is an outstanding graphic monitor tablet with lots of exciting features. We were quite impressed with how easy it is to draw on the working area, its quick response time, and pencil-touch pressure sensitivity. However, we expected a massive improvement from previous models and more customizability, especially for its pressure curves controls.