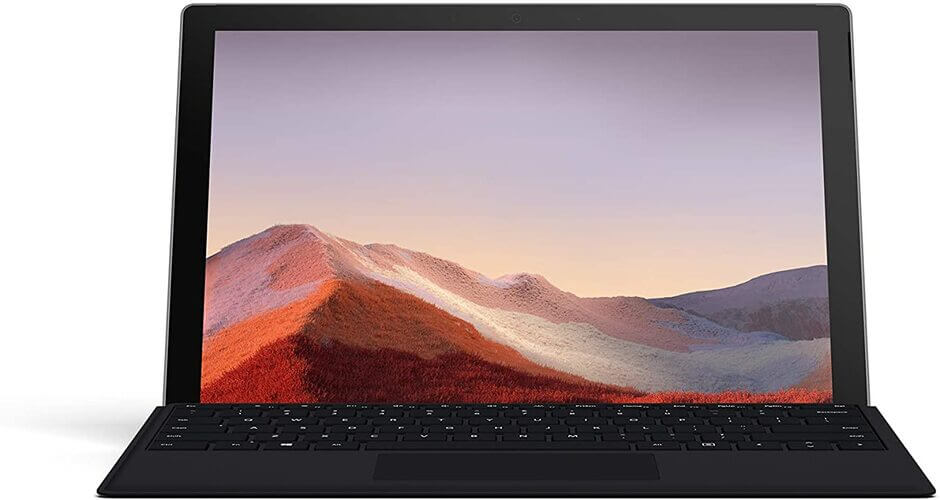 No one will ever accuse Microsoft of lacking imagination. Execution is their Achilles heel, or at least it used to be. The Microsoft Surface Pro 7 is a strong contender for device of the year. With the Surface line still trying to find a firm identity, the Pro 7 comes in like a hammer.

With past iterations of the Surface, users either got a good laptop or a good tablet. It was a toss up which side the Surface would land on, as Microsoft was still working out the kinks. With the introduction of the Microsoft Surface Pro 7, the company has finally found the right balance.

Available colors are platinum, matte black, and black. This is standard fare for the Surface line, so nothing out of the ordinary. The colors are professional-looking but really won’t turn heads. Something this subtle would be boring on another device, yet somehow it works fine with the Microsoft Surface Pro 7.

The real champion of the design is a slimmer profile, better corners, and improved accessories. With the optional Surface keyboard or pen, you’ll start to appreciate the design choices. Attached or unattached, it is designed for optimal workflow. Without question, the Microsoft Surface Pro 7 has a design that was made for productivity.

The display resolution is 2736×1824, so about the same as the Surface Pro 6. It takes a little getting used to if you’ve never used a device with a 3:2 aspect ratio. On a smaller screen, this resolution would have been problematic. As a 12.3-inch tablet, it looks and feels just right.

In tablet mode, holding the device doesn’t feel like handling a brick. It is light and easy to hold with one hand. The touchscreen is intuitive, responsive, and works great with or without the pen. At a 3:2 aspect ratio, webpages and Word documents are perfect. Media is not too far behind, with some surprising richness in colors when a lot of things are on the screen.

Buyers won’t get access to a powerful GPU and will have to settle for Iris Plus graphics. This isn’t a bad tradeoff and can handle light gaming in the i5 and i7 models. The i3 model gets downgraded to Intel UHD graphics, and really isn’t worth considering.

Durability is solid for the Microsoft Surface Pro 7. It is built well and can withstand a decent amount of damage. The tablet and cover come in at less than two pounds, which is an amazing achievement when you consider the hardware. Laptop mode with the optional keyboard won’t add that much more weight.

As a complete package, you are looking at one of the lightest and most powerful laptops available. The Microsoft Surface Pro 7 is expected to have the same (or better) longevity than previous models. Even the old Microsoft Surface RT looks good, so you can expect similar results with good maintenance routines.

It would have been nice if the Microsoft Surface Pro 7 got a little more love with its screen. A lot of users will spend time using the touch interface, so expect some smudges or wear over the years. Screen durability is strong, but won’t compete with dedicated graphics tablets, and devices like the iPad 12.9 are better-equipped for heavy usage.

This is the bread and butter of the Microsoft Surface Pro 7. It’s important to note that the i3 version should be avoided. It is not worth the price, and has performance that is comparable to generic tablets from a year ago. However, the i5/i7 variants are a breath of fresh air for the Surface series. Quad core performance from the 10th gen Intel chip is strong and energy efficient.

Buyers have a choice of 8GB or 16GB of ram and SSD combinations of 128GB, 256GB, and 512GB. Battery performance is off the charts and is rated for 10.5 hours of use. More importantly, Quick Resume is now working correctly with the Microsoft Surface Pro 7. While working on a big assignment, you’ll never feel like the device is rushing you to the finish line.

You’re not going to get a cutting-edge camera with the Microsoft Surface Pro 7. The front-facing camera is 5MP while the rear is 8MP. If your intent is to take beautiful pictures, then the hardware will disappoint. If you’re a purchaser that wants to create 4K video, then the device will also let you down.

The strength of the Microsoft Surface Pro 7’s camera is its video conferencing capabilities. Both cameras were built for streaming content as a creator or as a presenter. When it comes to video calls, the camera gets the job done. The built-in version of Skype is one of the many compatible apps that will show you the power of the Microsoft Surface Pro 7. As a host, you can manage multiple rooms without worrying about stutter or glitches.

Just like the camera, audio with this device was built for video conferencing. Speech is clear, and the speakers are positioned to prevent accidental blockage. Turning the volume up to the max won’t distort the sound, and carries a surprising level of quality when sound levels get busy.

Cortana will get a lot of mileage once you set up profiles. The mic does an admirable job of speech recognition, with no delay at all when issuing voice commands. Playing music on the speakers is less fulfilling, but doesn’t disappoint. When the Microsoft Surface Pro 7 is paired up with a Bluetooth accessory, you’ll unlock its true potential. There is a strong preference for Bluetooth 5.0 accessories, but any device will do the trick.

A Vast Improvement over the Last Generation

The Surface Pro 7 Does Microsoft Proud

With the release of the intriguing Surface Duo and now the solid Surface Pro 7, Microsoft proves that good things come to those who wait. It has taken a while, but the Surface line now seems like a pleasing alternative to Apple’s laptops. No one is rushing to replace their Apple laptops for a Surface, but a new challenger has definitely entered the ring. With some more polishing, the odds may be in Microsoft’s favor.

8
Score
The Microsoft Surface Pro 7 fills in the business laptop niche that the rebranded Lenovo is still struggling to fill. Series 7 gifts purchasers some features they’ve been asking for while removing unnecessary quirks from the previous generation.