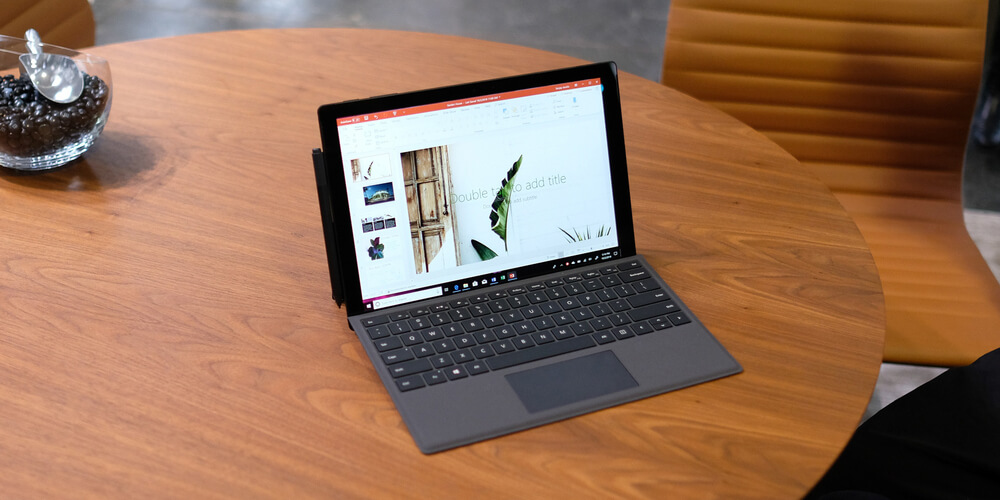 When the Surface series began in 2012, it marked a confusing time for the industry. Smartphones were still under six inches and could fit in one hand. Tablets were still considered expensive toys and hadn’t yet found a place in the industry. Apple was considered the de facto laptop choice but was out of the price range of the everyday consumer.

With the Surface Pro series, Microsoft gave consumers the true heir to the Lenovo ThinkPad T series. The Surface Pro 6 is another iteration of their successful laptop that continues to get better every generation. What started out as the RT failure has turned into a consistent Apple competitor.

At 12.3 inches, the Microsoft Surface Pro 6 display won’t wow you with 4K visuals. Instead, the focus went into color and sharpness with the incredible PixelSense display.

The screen is bright, and looks fantastic in all light conditions. Even in direct sunlight, you won’t have any trouble working in the Windows environment.

This was a necessary overhaul, and something they already improved on with the Microsoft Surface Pro 5. In this iteration of the Surface model, the company added in several hardware and software techniques to prevent eye fatigue.

Out of the box, the screen misses on technical prowess with its weird 2736 x 1824 resolution. But there are few laptops on the market that have as many screen convenience features as the Microsoft Surface Pro 6.

The only time portable hardware isn’t a disappointment is when purchasing a gaming laptop for an extraordinary price. And even then, the limitations provided by Sandy Bridge laptops were held back by poor battery life.

A capable laptop is one of the many tools a professional photographer needs to get the job done. The Microsoft Surface 6 Pro breaks some new ground by providing a mobile chip that is comparable to its desktop counterpart.

Windows 10 is loaded on the system and is paired with an 8th generation Coffee Lake Intel processor. Since the i3 CPU no longer exists in this iteration, users get to choose between the Intel Core i5-8250U/8350U or the Intel Core i7-8650U.

All variants are four cores with eight threads, so it is essentially the same processor but with a different base/turbo frequency. This lineup cuts down on CPU and GPU confusion, as all models use Intel’s UHD Graphics 620 iGPU.

Under the hood is 8GB of RAM, with an option for double the size. SSD storage is available as 128, 256, 512GB or 1TB. The usual surface connect port is available for expandability, with all models coming with a beefed-up USB 3.0 port, and microSD card reader.

Everything about this spec list is gravy except for the lack of a USB-C port. Even ancient models of the Macbook since 2015 have supported USB-C, so this was a major disappointment in the Microsoft Surface Pro 6.

Despite the ability to become a tablet, the Microsoft Surface Pro 6 does not come with a pen. Windows has pressure pen support, so the lack of an included pen was a big miss by the company.

It doesn’t help that they sell a separate Surface Pen for a pretty high price, one that isn’t even comparable to the one provided by the Parblo Mast10. As a result, buying a pen for the Surface becomes more of an as-needed accessory instead of a must-have.

Speakers on the unit are forward facing, and sound pretty good. In laptop or tablet mode, the placement makes sense. Although they didn’t make any major improvements with the sound, there was nothing wrong with it to begin with. Dolby Audio Premium processes the sound well, and it doesn’t hurt or harm the experience when you’re listening to media.

More importantly, there are no weird hiccups when using wireless or premium wired headsets. That means whatever works on your desktop system will have no problem on the Microsoft Surface Pro 6. Even if you use a headset like the SteelSeries that requires software, the engine has no problem recognizing the sound card on the laptop.

It seems a bit unfair to knock off points for a laptop camera, but let’s get real – virtual meetings are now bigger than ever. For that purpose, there are no complaints when using the Microsoft Surface Pro 6 as a host or a client.

Setting up the camera with your personal settings is mandatory if you want the best experience. The included software is sparse but good enough to get you started.

Using the rear camera is really no different than the front, even if it is higher quality. There is no flash, so don’t expect it to perform well in bad lighting conditions.

Both cameras are geared more towards streaming video than creating media. So, if your purpose for the laptop is to create beautiful photos or videos, then a smartphone camera will be the better option. In a pinch, the Microsoft Surface Pro 6 can create something beautiful with the help of Clip Studio Paint Pro.

Amazingly, the Microsoft Surface Pro 6 has great battery life. Windows does an excellent job of handling power saving without slowing down the performance of the laptop. This is noticeable when you use it in tablet mode and can squeeze out a few extra minutes of performance. But even in full laptop mode, the Microsoft Surface Pro 6 experience lasts for almost ten hours.

This is a massive improvement over the previous generation, and they managed it without lowering hardware specs. As a 2-in-1 device, this really puts it in the elite category. If you tweak the power settings according to your personal tastes, it is possible to make it last even longer.

Software issues with hybrid sleep have long been resolved in previous Windows updates. With the included SSD, you get an instant wake at the press of a button. On a single charge, this setup could last you multiple days without a recharge.

How Does the Microsoft Surface Pro 6 Compare?

The Lenovo ThinkPad x230t is an old but incredibly reliable laptop. Before 2-in-1 laptops became a thing, convertible laptops were used by several business users.

The Microsoft Surface Pro 6 is a consumer-level laptop that is equally efficient as a business product. It’s the best of both worlds and a piece of hardware that is hard to live without.

Competitors in the laptop computing space have been sleeping on the greatness of the Surface series. Price is the only thing that is keeping it from dominating the sales charts. For business, casual and creation purposes, the Microsoft Surface Pro 6 is all you will ever need.