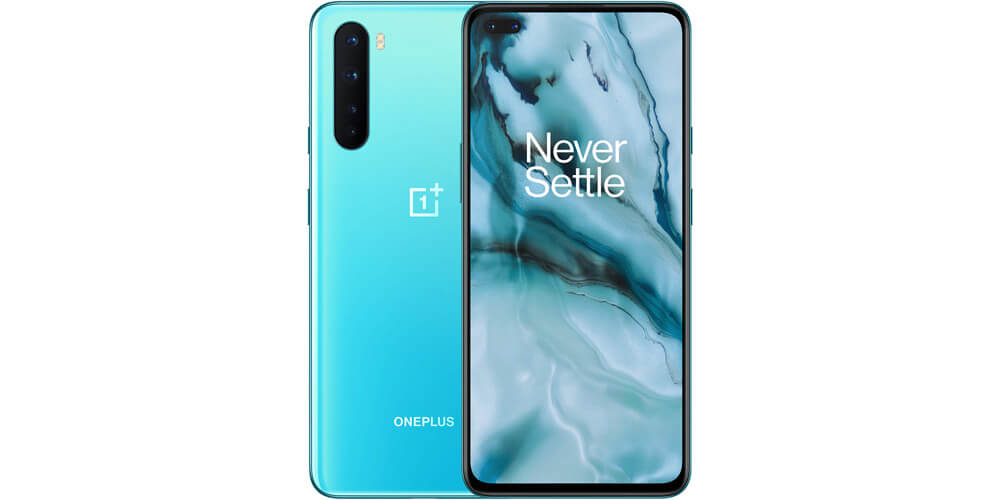 The OnePlus Nord brings a breath of fresh air to the smartphone market. This is already evident from the name: instead of a number, it corresponds to a direction.

The excellent value for money that OnePlus offered, as compared to iPhone and Samsung, was the major reason the brand invaded the global markets. Somehow, while pushing its top-of-the-line devices further with each release, OnePlus started slipping into the premium category.

OnePlus has finally realized the gap in the market, and with the Nord, aims to put itself at the forefront of mid-range smartphones.

How does the price difference from the superior OnePlus phones correspond to Nord’s design, display, performance, and camera? Let’s find out!

With a 6.44-inch display and the noticeably high weight of 184 grams, the OnePlus Nord is not lightweight. It’s a disappointment for people who were expecting a compact phone from OnePlus.

However, as a compensation, you get Gorilla Glass 5 at the front and back. The frame, on the other hand, is made of plastic. But you can’t tell by looking at it. It is shiny and has the same color as the back. The rear is unfortunately not equipped with a matte surface like in the top models and it catches fingerprints faster than Usain Bolt completes a sprint.

The ergonomics and handling, as well as the accessibility of the buttons, are also typical for the current market. The three-stage alert slider, already known from the flagship models OnePlus 8 and 8 Pro, allows you to switch between different sound modes easily.

The Nord’s display is impressive in many ways. Many OnePlus fans would be pleased with the flat display edges. Unlike its big brothers, the screen does not bend backward on the sides. The narrow bezels, with a display-to-surface ratio of around 85 percent, leave a modern and high-quality impression.

With a resolution of 2,400 x 1,080 pixels, the OnePlus Nord has a pixel density of 409ppi. It is sufficiently sharp but is a bit behind the similarly-priced Google Pixel 4A and LG V40 ThinQ.

When it comes to brightness, the Nord is on par with the current Apple flagship iPhone 11 Pro Max. You shouldn’t face any problems using the phone in the bright sunshine.

The OLED display has even more to offer. In addition to an adjustable refresh rate of 90 Hertz, the excellent contrast values shoot up to 188:1. The white point deviates zero percent from the ideal, so the display shows colors as realistically as possible.

The built-in battery in the OnePlus Nord has a capacity of 4,115 mAh. In tests, the Nord managed a decent runtime of around 12 hours at a frame rate of 60 Hertz. An increased refresh rate hardly hurts the battery; with 90 frames per second, it only costs half an hour of battery life.

Charging an empty battery for 30 minutes is usually enough for a 67 percent charge. The 30-watt power supply with the Nord enables fast charging. In ideal conditions, it takes less than an hour to go from 0 to 100 percent charge. It’s a shame that this phone does not support wireless charging, despite the glass back.

So far, no OnePlus smartphone has seen the light of day without a flagship processor. For the first time, the Chinese manufacturer is breaking this tradition. The OnePlus Nord has to be content with Qualcomm Snapdragon 765G. In contrast to the Qualcomm Snapdragon 865 processor in OnePlus 8 and 8 Pro, it works with six instead of eight cores and has a clock rate of up to 2.4 gigahertz instead of three.

On a brighter side, the Nord won’t struggle with the lack of cache. Here you have the option to choose between 8GB and 12GB variants, similar to the top models.

OnePlus uses six camera lenses in its first mid-range smartphone, two of which are on the front and are hidden in a hole in the upper left corner of the display. Besides a conventional front camera, a wide-angle camera is now also on board for the first time. It is particularly useful for large group selfies.

The four rear lenses are grouped in a vertical camera module that is not centrally arranged. OnePlus has borrowed the main camera from OnePlus 8. As you would expect, it is optically stabilized and has a resolution of 48 megapixels. An ultra-wide-angle lens, along with macro and bokeh lens, allows you to shoot in a variety of situations and themes.

Image quality from the OnePlus Nord is excellent in daylight. It can easily keep up with much more expensive smartphones. But the camera performance is rather mediocre under difficult lighting conditions, and the difference from top-end models becomes more apparent.

How Does the OnePlus Nord Compare to Its Big Brothers?

The OnePlus Nord appeals most to those who are already impressed by OnePlus phones but don’t want to burn a hole in their pockets. So it’s worth comparing it to the OnePlus 8 and 8 Pro to see if the Nord even comes close.

You’ll find that the difference between the Nord and 8 Pro is clear, especially in processor, features, and camera. However, OnePlus 8 is only slightly better, which might not justify its price tag, and makes the Nord a worthy alternative.

The OnePlus Nord is one of the best budget smartphones on the market – thanks to its captivating display, powerful performance, and lightning-fast charging. The camera also makes a rock-solid impression, even if it’s mediocre in low-light conditions.

The latest launch from OnePlus keeps us hopeful that it wouldn’t just limit itself to high-end smartphones and will cater to the audience with tighter budgets.

9
Score
The OnePlus Nord is a mid-range smartphone with the core of OnePlus’s design and technology. It offers a premium experience for a lesser price, the same principle with which the brand flourished.