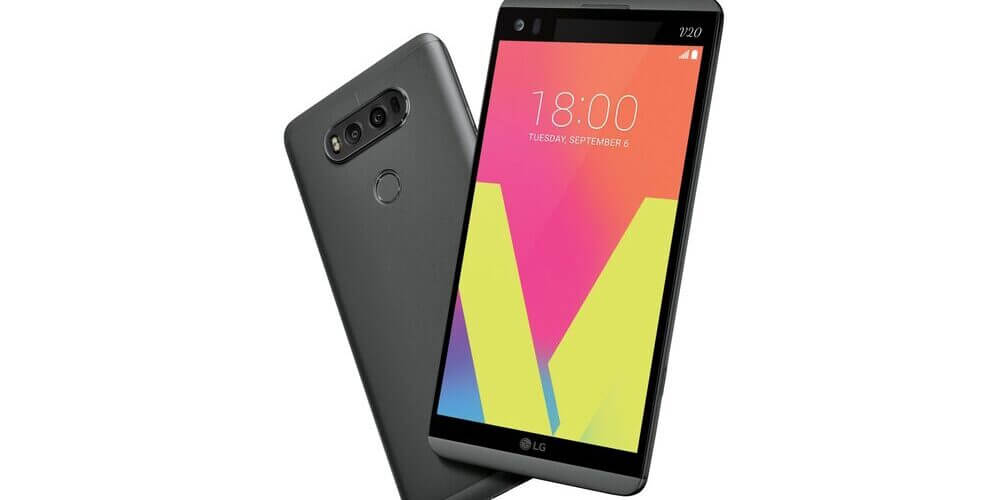 It’s not often that a high-end smartphone series can play ball with the big boys. The LG V20 entered the market with a lot of promise. For the most part, the company exceeded expectations for the entire line. The hardware and software of the LG V20 won’t beat down Samsung or Apple, but it does a good job of staying in the race.

Consumers should think of the LG V20 as the warm up to what has become one of the best high-end phone lineups in the industry. As such, the LG V20 will leave you wanting more. But for the right price, it is the steal of the century.

Being one year apart from the LG V10 has its benefits, starting with how the new model looks. The LG V20 pretty much built the blueprint for the LG V30’s final form.

They ditched the plastic/steel combo and went with an aluminum frame. This wasn’t exactly meant to help the design, but it’s noticeable. The phone looks less like a toy and more like a serious smartphone contender.

At first glance the design is basic and really no different from any other phone of its size. LG once again went soft with the available colors by only offering Titan, Pink, and Silver. Titan and silver are okay, but pink completely fails the color test.

This is a bit disappointing since the G series released at the same time and offered better colors. Overall, the LG V20 design is boring but functional.

A new year means a better screen – at least for most companies. There is no gimmick this year that really sells the LG V20’s screen. It is the same quality as the LG V10, so while not a massive disappointment, it is a missed opportunity from LG.

Side by side, it is hard to tell the difference. But on paper, the LG V10 technically has a better screen based on PPI density. That is insane and a bit puzzling for consumers that want a leap forward.

The good news is that they refined the secondary display to work better. With the LG V10, it was more of an experimental feature that didn’t really pan out.

It’s simply a small window in the upper part of the screen that shows important information. Instead of informational pop-ups begging for your attention in an active window, they are moved to the top of the screen.

Durability is less of a question with the LG V20 thanks to the aluminum frame. Combined with the same Gorilla Glass 4 from last year, it makes for a much more competent combo when dropped.

Just like last year, it is also MIL-STD-810G compliant. It’s built for a little roughhousing, but you won’t be taking this on a long hike without a case.

The LG V20 holds up well against scratches and general screen damage. It won’t win any awards, but it may survive a few drops. It’s a lot lighter than its predecessor at 6.14oz, so that helps on impact. You will also have less of a sag in your pocket when carrying it around.

The entire profile of the LG V20 seems ‘sturdy’, despite it being a multimedia device. This somewhat excuses its boring, uninspiring design.

The 16MP camera is more than capable of taking great photos. It’s slightly underrated and does a good job of handling extra features like paranorma, HDR, and 4K video.

No one is going to start comparing the LG V20 to an iPhone, but it does a respectable job of holding its own. Video is smooth, snappy, and has great built-in stabilization.

When using the main camera, you’ll quickly find out it is the star of the show. In low light conditions, the LG V20 is one of a handful of phones that can take great pictures.

The dual LED-flash is helpful, but a good portion of the horsepower is offloaded to the software. There is no need to go to the Play Store for a third-party camera app as the one packed with the V20 is impressive and more than enough.

The front-facing camera is 5MP, but not disappointing. It handles video calls well and serves its only purpose. If you make the mistake of trying to take a photo with it, then prepare for a few snaps of frustration.

Audio has improved from the LG V20, and it is good enough that you’ll enjoy hours of multimedia. A lot of the high-end features represented with this model made its way into the LG G7 ThinQ.

The 3.5mm headphone jack returns and is once again appreciated as a rare feature. Audio recording is 192HZ and sounds amazing. This translates to everything, from gaming to phone calls, and of course multimedia.

As packed as the LG V20 is, it is easy to forget that it’s supposed to be a smartphone. The call quality is great, and the hardware really goes above and beyond in this instance.

Out of the box, Bluetooth 4.2 is supported, so wireless streaming shouldn’t be an issue. Consumers should get familiar with the built-in HD recorder, as it is something a lot of other phones should mimic. The FLAC quality recordings are about as close to studio recordings as you can get on a portable device.

How Does the LG V20 Compare?

Side by side, it is a little disappointing how close the LG V10 and LG V20 compare. It’s not a huge leap unless you count the incredible audio chip in the V20.

Buyers will obviously want to go with the newer version of the V series. There are still a few things that swing a vote or two in the direction of the V10, but newer is always better with LG.

A Nice Warm-up by LG

The LG V20 was one of the phones that changed the direction the company took. There is nothing more frustrating than an average phone, but the LG V20 is a good average phone and worth the price if it’s available.

There is a bit of legend attached to this phone, and over time it may become a collector’s item. If it meets your hardware expectations, take the LG V20 for a spin.

7
Score
With the LG V20, you have to take some of the bad to appreciate the good. This early V series model is the beginning of a very dominant lineup. The LG V20 is still a great buy, and more than capable of handling your smartphone tasks.