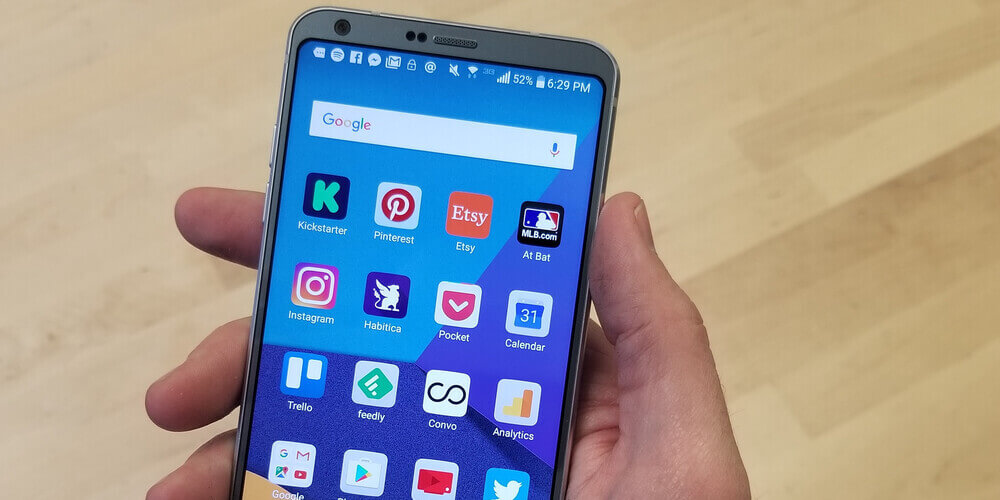 From a more dramatic perspective, this was the last mid-tier phone to come from the G series before its rebrand. As the alternative to the top-tier G V30, it was a bit underwhelming.

As a swansong to the now-defunct G series, it really didn’t make as many waves as the V30 did. If you’re thinking about an upgrade, this may not be it. But when you want a phone without any glaring flaws, there is no shame in purchasing the LG G6.

The first thing you will notice about the LG G6 is its compactness. This isn’t a visual trick at all and makes it easy to operate one-handed.

The presentation is great, with nothing on the front of the phone to distract from its beautiful screen. Putting the LG G6 side by side with other current smartphones makes it look like a toy in comparison, but that is one of its strengths, not a weakness.

Users that want to use the actual telephone features of their smartphone will appreciate this anti-phablet design decision. With that said, the size is big enough to make it a suitable tablet replacement if needed.

Available colors are Lavender Violet, Raspberry Rose, Astro Black, Mystic White, Ice Platinum, Terra Gold, Marine Blue, and Moroccan Blue. Nothing fancy there, but all colors have a clean look. You know that look – the kind that makes an iPhone stand out.

Say goodbye to a screen that is almost the same size as your bedroom television. The LG G6 has a 5.7-inch IPS screen with Gorilla Glass 5 on the front and Gorilla Glass 3 on the back.

The colors are vibrant and look great, but it doesn’t pop like the LG G7 ThinQ. This is noticeable since the resolution is listed at 1440×2880. You can’t hide the quality of the screen on a phone of this size and resolution.

Media, gaming and pictures all look great. But once again, you’ll constantly get that feeling that it is being held back by the screen. Even when HDR10 video is played, it is a step back from similar smartphones. The best feature of the screen is how accurate the colors are for the photos.

It’s a thick phone and feels like a brick in your hand. The LG G6 also drops like a brick but is well protected with its aluminum frame.

The weight may be bothersome to some, but this little rugged phone is IP68 and MIL-STD-810G compliant. It’s more durable than the LG V35 ThinQ and can withstand a lot of punishment.

If you crack the screen, the LG G6 won’t crack your wallet. Since it is a cheap IPS LCD, you won’t have to spend a fortune to fix it.

In 2015, the company released the LG G4 and its glorious hexacore processor. But from G5 onwards, the G series was downgraded to use a quadcore processor. The higher-end V series received better hardware treatment, especially when it came to the GPU.

Out of the box, the base version will get 32GB of storage space and 4GB of RAM. The Snapdragon 821 powers the CPU while an Adreno 530 takes care of the GPU. These specifications are okay at best, and won’t slow down the phone during intense sessions.

Due to the way Android 9 handles graphics, the LG G6 is a sneakily good phone for media playback and gaming. If you’re into game emulation, it is a near-perfect smartphone due to its size and hardware.

LG upgraded the camera system to allow for dual 13MP resolution. The result is noticeable when you take any wide-angle photo. The panorama mode has been improved, but it’s still a step behind the big hitters like the iPhone 11 Pro Max.

The big surprise here is how well 4K video looks in motion. It has never been a weak point of the series, but the LG G6 optimizes it well for this iteration.

The selfie camera is another story and remains a disappointment. There has been no major hardware push from the LG G5, and the front-facing camera remains a basic 5MP capable of 1080p video.

It’s not a bad camera, but it is old technology in what is supposed to be a good phone. The built-in camera software has great synergy with the hardware and will give you no trouble when creating media.

A carryover from the previous generation is the inclusion of the 3.5mm headphone jack. The FM feature is market dependent but is a nice feature for consumers that don’t want to use an app.

Audio sounds great from the speaker and has clear lows and highs, letting you listen to music or watch movies without suffering a downgrade in quality. When creating a video, good handling of the phone leads to some really great audio quality.

Phone call quality is good, but won’t be winning any awards. Users that want to take full advantage of the sound system should download a third-party app with better equalizer controls. The included sound system is nice, but needs a custom touch to maximize its quality.

How Does the LG G6 Compare?

Every phone series has its ups and downs. The LG G4 was probably the best innovation of the G series, with a lot of pros that were nixed in favor of growing the V series.

Users that want an advanced smartphone will notice the regression of the LG G6 compared to similar products. The specifications and software are still top-notch, but there is no denying that LG was on autopilot with this model.

A Solid Choice for This Generation

A smartphone maker doesn’t always have to knock it out of the park to create a solid product. The LG G6 is a solid, but boring smartphone. Its lack of bells and whistles was enough to force LG to rebrand the entire G series.

Buyers that just want to squeeze a couple of years out of a single purchase will be disappointed with this phone. But consumers that need a basic smartphone without any major flaws will love the LG G6.

8
Score
In the smartphone world, there are harsh penalties for being average. The LG G6 is the last of its kind, but does nothing to stand out from the pack. This solid device has last generation hardware, and limited design choices that are out of touch with the industry. Despite its faults, the LG G6 is a solid, albeit boring smartphone.