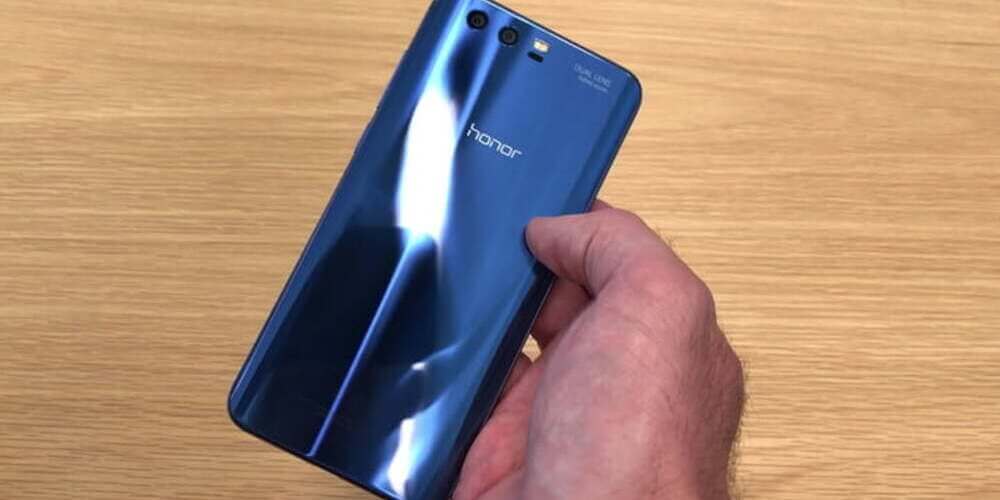 But consumers who just want something to work out of the box will be disappointed. Like all old phones, convenience features are either not included or terribly outdated. To turn the Huawei Honor 9 from a decent phone into a great phone, there is an expectation to dig under the hood. Your willingness to modify the software is the key to enjoying this unique model.

You can’t escape the old-school aesthetic of the Huawei Honor 9. That means a thick body, tons of wasted space around the screen, and some really bland looking colors. The phone won’t win in a beauty contest but was never meant to be much of a looker. It is definitely a far cry from the updated look of the Huawei P40 Pro.

Available colors are blue, black, gold, and grey. A limited-edition Robin egg blue was created, but nothing particularly special. The gold color looks more like a shiny bronze, yet the other colors meet expectations. You won’t get wowed by the design of the Huawei Honor 9, and will more than likely get annoyed by its girth. On the plus side, the button placement avoids gimmicks and comes off as optimized for one-handed usage.

Before smartphones decided to become slimmer tablets, the Huawei Honor 9 was part of a more dignified generation. The phone size was slightly smaller than leading competitors, but still comparable to something like an iPhone 7 Plus, with a matching 1080×1920 resolution. The specs were fine, but the actual colors were average.

The quality of the colors you saw on screen had to do with the choice to use a LTPS IPS LCD. Still pictures and web surfing look fantastic, but things in motion were hit or miss. It wasn’t that media was bad on the Huawei Honor 9, it’s just that it didn’t meet the current expectations of an HD screen. The screen to body ratio was a bit better than expected, but there was still wasted potential with all of the space on the top, bottom and sides.

The Huawei Honor 9 is basically a brick with a screen attached to it. It existed during a time before smartphones fully adopted the ultra-thin design. Gorilla Glass 3 handles the front and the back, while the aluminum frame takes care of everything else. This is all high-quality stuff that is more than capable of handling scratches or drops.

All of the buttons received similar care, and won’t get worn out from heavy usage. This is amazing durability from a company that’s not in the same league as Apple or Samsung. And considering the mods that have been created for the Huawei Honor 9, it has history for being dependable. It is a strong phone that has the pedigree to last for multiple years beyond its purchase date.

Huawei was one of the leading companies to push for more cores in smartphones while competitors were sticking to quads. The Huawei Honor 9 is an octa-core beast that crushes multitasking. This applies to all models, whether you’re dealing with 4 or 6GB of RAM. Pushing for more RAM is another area Huawei led the field in, and it paired well with their CPU choice.

Things get a little muddy when you look at the GPU the smartphone is stuck with – a Mali-G71 MP8. At the time of its creation, it was a pretty good chip. But Adreno has aged better, especially if you compare supported instruction sets. Android’s performance has some ties to the GPU being used, and in this case, the Huawei Honor 9 would have been a better performer with an Adreno chip. Every upgrade of Android made the GPU less efficient, but this can be offset with personal ROM images and customizations.

Both the front and rear cameras are of exceptional quality when taking photos or video. The 8 MP front-facing camera still outclasses a lot of today’s offerings, while the rear dual 12/20 MP is still a powerful companion. Taking 4K video is impressive, as it seems the GPU was made more for media creation than gaming. Owners of the Huawei P20 Pro may even feel like the camera is more of a side-grade than a downgrade.

With all of the new apps for FaceTiming, the front-facing camera is finally getting the workout it deserves. At the time of the phone’s debut, there weren’t many apps that took full advantage of the camera’s features. The Huawei Honor 9 was ahead of its time, both in hardware and expectations for media creation.

Audio for the Huawei Honor 9 is nothing spectacular. The phone gets extra points for including a 3.5mm headphone jack, but that’s the main feature. When using the loudspeaker to play music or media, it is missing a noticeable amount of bass. You get that heavy treble sound, which turns into a tinny mess at high volumes.

Phone calls are much better, and it seems that the Huawei Honor 9 works better for WiFi calling than current smartphones. If you’ve had trouble in the past with the sound of WiFi calling, then the Huawei Honor 9 will be a nice surprise. As for the loudspeaker, changing the equalizer settings with a third-party app helps a little. You will barely notice it, so the actual effect may be a placebo.

How Does Huawei Honor 9 Compare?

The LG G5 is a decent flagship phone to put head to head against the Huawei Honor 9. They have similar specs, but had completely different price points. Just like LG, Huawei started to inch in on the big boy market owned by Apple and Samsung. Overall, the Huawei Honor 9 has better long-term value than the LG G5.

Build Your Own Smartphone

If you’re willing to put in the work, there are few phones as customizable as the Huawei Honor 9. You don’t truly appreciate its power until you load a custom ROM to make a few additional tweaks. Purchasers who want to avoid the hobby part of owning a smartphone will want to look elsewhere. Owning the Huawei Honor 9 is an experience, but one that isn’t for every individual.

8
Score
The perfect smartphone doesn’t exist, so why not make one? With the Huawei Honor 9, you can turn one of the most revered smartphones of the decade into a current-gen flagship killer. It’s a transformation that takes time, but is worth the end result and it won't put a dent in your bank account.