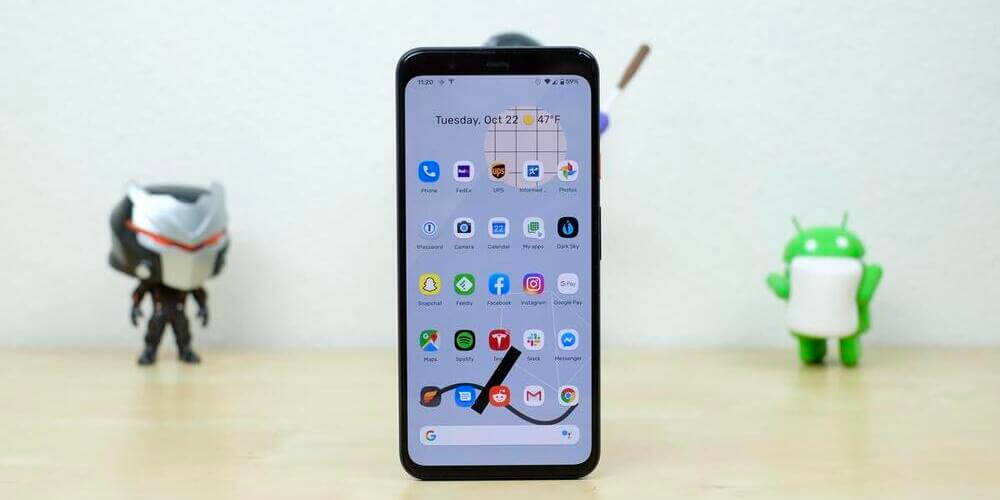 The Pixel is one of the most talked about smartphones in the industry. It’s not often a software maker comes out with competitive hardware to make use of its own systems.

Microsoft failed with its Windows line of phones while Apple soared with its numerous hardware models. Google started the gears rolling with the Nexus line in 2010. But it was in 2016 when Google became a serious name in the smartphone game.

With the Google Pixel 4 XL, the company managed to take all of the pros of previous releases while minimizing the cons. It’s a massive improvement that shows how far Google’s phone division has advanced.

There are a few quirks here and there that may scare away casual consumers. But for smartphone enthusiasts, this is a true flagship phone.

Color options are limited to black, white, and orange. There are fancy titles for each, but nothing that will really stand out from your normal color options. All of this is limited, but not entirely bad when you factor in the design.

The Google Pixel 4 XL is a pretty phone, with both the front and back focusing on a minimalist design standard. The back is a simple camera square, and the front is all screen.

For a phone of this size, it makes sense to put the majority of the focus on making the screen a standout. The design is simple enough to make third-party cases viable, with no worrisome quirks to interfere with the camera, sound, or sensors. If you have a decent enough grasp of 3D printing, making a case for the Google Pixel 4 XL could be a fun project.

You will either love or hate the display of the Google Pixel 4 XL. It is huge, sporting a full 6.3-inch QHD+ display. This will of course cause problems for some consumers that value one handed operation. Your hands will get a workout either way, but shouldn’t come as a surprise since this is the XL edition.

Google spared no expense with the P-OLED touchscreen. It has an impressive 81.3 percent screen to body ratio. There may be some complaints about going with P-OLED vs. AMOLED based on performance specs from competitors.

For what it’s worth, the difference is hardly noticeable and serves as a more of an aesthetic choice. This more than likely has to do with Google’s quality control more than their preference with materials. The only XL model to use AMOLED was the original Google Pixel XL from 2016.

The aluminum frame is sandwiched between Gorilla Glass 5 on both sides. The Pixels have never had issues with being durable, but the XL models seem to get a bad rep for screen fractures.

This is a bit of a myth and has more to do with trying to hold a massive phone without proper protection. For its size, this is more durable than most smartphones and tablets when it isn’t in a case.

If you’re feeling adventurous, the Google Pixel 4 XL is one of the more rugged larger phones on the market. Unlike the LG G5, the Pixel line can handle a few drops without cracking.

It’s rated as IP68 dust and water-resistant and handles micro-scratches well. All of these features create a safe experience for consumers that want to take their time deciding on a phone case.

Diving into the hardware specifications of a Google phone is like going to a candy store. There is excess of everything, with opulence for days. Being at the cutting edge of technology is what makes the Pixel line awesome, so it’s no surprise that the Google Pixel 4 XL crushes it again.

The CPU has been upgraded to a Snapdragon 855, a sizeable move from the previous generations 845. Moving from 10NM to 7NM makes multi-tasking more efficient without heating the phone up. This is a phone that is built for serious gaming and multimedia applications.

The bump up from a 630 to a 640 Adreno is noticeable in the Google Pixel 4 XL, but has more to do with how well it meshes with the processor. RAM is capped at 6GB, while storage comes as either 64GB or 128GB with no option for external chips.

One of the highlights of any Google phone is its ability to take stunning photos. The Google Pixel 4 XL has an 8MP front-facing camera and a 12.2/16MP dual rear camera.

Those may seem like pedestrian specs on paper, but the camera is legit from top to bottom. Once you get used to the software, there are few smartphone cameras that can take great day and night photos.

Night Sight is the biggest feature of this model, with a lot of moving parts in the background ensuring you take accurate photos. Video quality is great, and the Google Pixel 4 XL still has one of the better cameras for facetime.

The only downside to the camera is that it doesn’t have ultrawide support. This isn’t a huge omission, but it’s something that will be missed if you are used to the feature.

There is no input for a 3.5mm headphone jack, so users are left using the USB-C port for headphones. This is an annoying workaround that forces you to use wireless charging to top up your power.

Audio is still good, whether wired or wireless. There are no problems pairing Bluetooth devices to stream the audio. The sound has punch and lacks any of the annoying pops or echoes you’d get from inferior hardware.

When using the speakers on the device itself, consumers will appreciate the loudness. Although the speakers are not front-facing, it still sounds great, even in a crowded setting. You can hear music and words clearly without cranking it up to maximum volume. Call quality is solid, but not earth-shattering.

How Does the Google Pixel 4 XL Compare?

Companies usually make a small jump from one generation to the next. Going from the Google Pixel 3 XL to the 4 XL is like getting a completely new phone.

This doesn’t feel like an incremental upgrade from Google. Instead of wasting money for a new generation, you are getting first dibs on the future of smartphones.

Google Is a Big Dog

The lack of a fingerprint sensor doesn’t slow down the powerful Google Pixel 4 XL. It’s a great phone and goes out of its way to provide more than powerful hardware. Year after year, the Pixel series continues to provide a smartphone that is a step above your average flagship.

9
Score
A few things guaranteed the Google Pixel 4 XL's success. The camera, software, and of course, a ridiculously large screen. If you’re looking for a cutting edge phone, then consider the Google Pixel 4 XL. The battery has been improved from previous models and can last a day of heavy use.