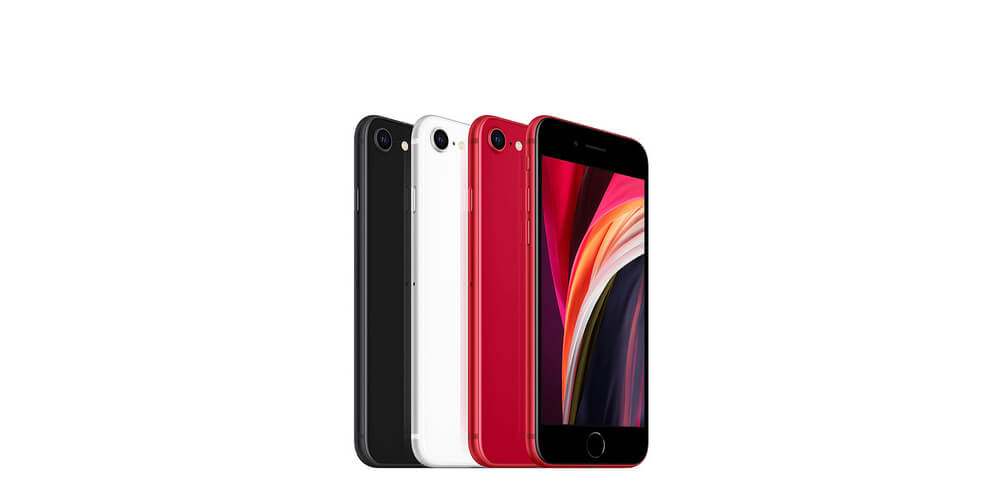 The iPhone SE is the 2020 revamp of the 2016 model with the same name. Apple isn’t known for taking mulligans with their product line, so seeing the Apple iPhone SE will spur some mixed feelings. It was their shot at a mid-tier iPhone, but came out a few months before the more powerful iPhone 7 and its plus variant.

In the days leading up to the release of the original Apple iPhone SE, its existence didn’t make sense. Even for budget consumers, the lack of features compared to a full-fledged iPhone was not worth the cost savings. With the new 2020 version, the market has shifted enough to make the cost-to-value ratio of the new Apple iPhone SE a worthy challenger.

Apple didn’t exactly put their A-team in charge of the colors for the Apple iPhone SE. Consumers have a choice of white, black, or red. They all look great, but are pretty much run-of-the-mill designs for an Apple smartphone. For some reason, the bezel for each phone is black. Even if you aren’t a stickler for design, this decision sticks out like a sore thumb.

Things get a little infuriating when you measure the screen-to-body ratio. It comes in well below 70 percent, and not that much higher than the original Apple iPhone SE. The design really can’t be seen as an improvement, since it is a step back from the modern industry and Apple as a whole.

At 4.7 inches, it is sized perfectly. There are no complaints about the screen, and the Retina IPS is everything you’d expect. Apple has always had the prettiest screen technology in the industry, so nothing changes here, even with the Apple iPhone SE being a budget phone.

Media, games, and web surfing are a joy in all light conditions. You’ll get accurate colors when using the camera for photos or video. Consumers that are into emulation will find that no portable device comes close to what the Retina display provides. SNES and other 16-bit emulators look gorgeous, showing that hardware can make a major difference. The only downside to the Apple iPhone SE’s display is that it is only 750 x 1334.

Apple didn’t exactly pay attention to durability when designing the original Apple iPhone SE, and that trend continues with the 2020 version. The Gorilla Glass for the Apple iPhone SE is so old that it is exceeded by smartphone models in 2016. Dust and water resistance is provided, but the IP67 rating is a bare minimum.

The low durability of the Apple iPhone SE is paired with a high weight of 5.22 ounces. This is a bit unusual, as you would expect something this heavy to be built like a brick. It just points to top-quality hardware on the inside, but a weak exterior to hold all of it together. Pair up your Apple iPhone SE with a case immediately, or be prepared to make an insurance claim on the first drop.

Hardware is one of the selling points of the Apple iPhone SE. It uses a hexacore processor and three gigabytes of RAM. For an Apple product, that is a big deal for hardware. When paired with iOS 13, it creates a smooth experience with other products like the Apple Watch Series 5.

The company was generous with space, opting for 64, 128, and 256 GB. All versions have the same specs, so the only hardware difference is space. You’re not going to find many phones with this type of performance at an affordable price point. The Apple iPhone SE is just a different beast altogether from what users expect in Apple products.

HDR and better LED lighting are the two biggest upgrades for the camera on the Apple iPhone SE. Although video supports higher FPS, the real star is how well the mic captures sound. The camera is nice, but the improvements have more to do with iOS 13 than its modernized hardware. You’ll see a good bulk of those improvements when you’re editing in Final Cut Pro or other competing photo editors.

Image stabilization is a fascinating addition to the Apple iPhone SE. OIS works wonders to get you the best shot, and does so without needing the consumer to configure the settings. There are a lot of background additions like this that improve camera usability without user intervention. FaceTime is still fun to use, with a powerful 7MP selfie camera as the workhorse. Add-on smartphone lenses will give you extra options if you want to get creative.

Without a 3.5mm headphone jack, users are forced into wireless or third-party options.  Frustration aside, Apple products still have the best sound in the business. This comes with Bluetooth 5.0 support, and compatibility with the best sound accessories around.

Call quality is top of the line, and the speakers have a nice punch. One of the downsides to the Apple iPhone SE is the proprietary USB connector. This quirky addition is one of its biggest strengths if you’re willing to make a third-party purchase. There are countless add-ons that use the proprietary port to extend functionality.

Is the New Apple iPhone SE a True Upgrade?

When you do a revamp of an older phone, the new version should fix, or at least improve on, its flaws. The Apple iPhone SE does a good job in some areas, but stays average in others. You’re not going to replace your professional camera with an Apple iPhone SE. Apple users will be more than satisfied with the modernized version. Android consumers moving to Apple will find the iPhone SE sufficient, but not groundbreaking.

You Get What You Pay For

Apple was not under a huge amount of pressure to make the Apple iPhone SE a memorable phone. In its current state, the device is a valuable part of their lineup and a worthy purchase. It has surprising longevity, and that alone was worth the revamp for 2020. If you’re on the fence about buying an Apple product, then the Apple iPhone SE is a perfect test subject.

8
Score
You won’t find a better intro into the Apple ecosystem than the new iPhone SE. It is a true smartphone experience from top to bottom and is made to last for several years. With the endless supply of accessories available for Apple products, the Apple iPhone SE will become your new favorite companion.