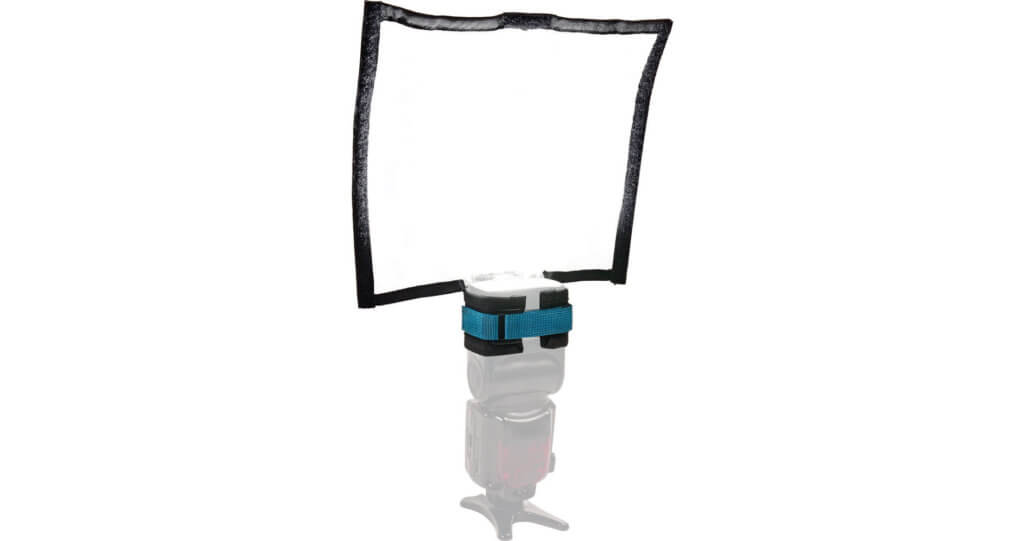 The Rogue FlashBender 2 range of light modifiers attaches to a flashgun to provide variations of light diffusion. The idea is to provide softer light than using direct flash and a different spread of light depending on which version you choose. Ideal scenarios would be for wedding and portrait photographers who need a quick setup or specific spread of light.

As above, there are a few different versions in the range as the FlashBender 2 XL with strip grid attachment, bounce card, small softbox kit, and large softbox kit. Basically, different sizes for different needs. The one reviewed here is the simple reflector version which almost acts like a huge bounce card to throw light towards your subject.

The unit is very simple in that it has a large white reflective surface, which sits above the flash head and can be bent in any which way you like. Attaching the FlashBender 2 to a flashgun is very straightforward with a Velcro strap which sits in place very securely, helped with some rubber material. The whole piece feels very well put together with thick materials that should last a good while.

Each Rogue Flashbender has a number of bendable poles stitched to their backs, which means they can be bent and formed to any shape you like from completely flat to a snoot type shape. Depending on the version, there are also little Velcro attachments to hold everything in place, most obviously as a snoot type shape.

Once attached to a flashgun, the FlashBender can be bent into the shape you require. Most often it will be used flat for as much surface area as possible, while another common way will be to bend the top of the FlashBender to push more light forward.

With a flashgun pointed upwards and the Rogue FlashBender 2 fully spread out, you can immediately get softer flashlight than with direct flash. When taking a portrait, the shadows are much softer, like under the chin, and it also brings slightly more refinement to a face. Don’t expect the spread of light you get with a large softbox, but it’s definitely more pleasing than direct flash. The results give a less ‘flashed’ look to an image, working best with close-up images such as headshots.

The other thing noticeable in close-up portraits are some nice catchlights in the eyes. It’s not a massive amount, but just enough to add a little more sparkle than regular bounced flash.

Another technique is to bend the flashgun slightly forward to bounce light onto a subject. This can work better outside with nothing to bounce additional light off, but you will have to experiment a little with which angles work best. As the FlashBender is bendy, the initial want is to start bending it into unusual shapes. This concentrates more light, but flat is how it will likely be used most. If you bend the top edge of the FlashBender over too far to form a kind of lip it can cut off the light. But, it’s good to experiment as it’s made to be bent, so why not.

When used with an off-camera flash, imagine a tiny version of a shoot through umbrella for light quality. There’s definitely more room for experimentation this way, and it’s a quick way to have soft directional light.

So, on one hand, it feels like the Rogue FlashBender 2 is a huge bounce card, which can also be used as a snoot or very small bounced flash. It will definitely soften up light as opposed to direct flash, but it will also take a bit of experimentation. It’s also a little bit weird having such a huge piece of white stuff sticking out from the top of your flashgun, especially with the built-in flash. If vanity isn’t a problem, then there is no issue here.

How Does the Rogue FlashBender 2 Compare?

As a direct comparison, the design is really so simple that it would be up against the same design from other makers. One example is the Honl Photos reflector which basically does the same thing around the same price point, with the same quality materials. This is why there is no comparison table with this review as it’s a simple design and they all have the same basic elements.

As this is the realm of small light diffusers stuck directly onto a flash head, the next up comparison would be small softboxes. The Lastolite EzyBox Speed-Lite is a 22 x 22cm softbox which straps directly to the flashgun. It costs more than the FlashBender, but there’s more to it as it’s a complete softbox.

Small and portable light modifiers are a competitive market with lots of options available. The FlashBender is arguably the simplest design, which can be fitted and used in seconds. If you wanted something that is more softbox-like, then there are many options available around the same price point which could be used on camera, but you could also argue these can’t be used as a snoot. Like most of these things, it’s horses for courses.

The Rogue FlashBender 2 could be a handy addition for wedding photographers, who are on the run and need a quick and easy way for softer light. It won’t replace a softbox, but it could be a nice addition to your light modifier arsenal at an ok price.

9
Score
The Rogue Flashbender 2 line is a series of versatile light modifiers that can be altered to fit any situation. Easily strapped to the head of a flash, these modifiers feature a bendable white surface to bounce light off, allowing for a softer light and more controlled spread.