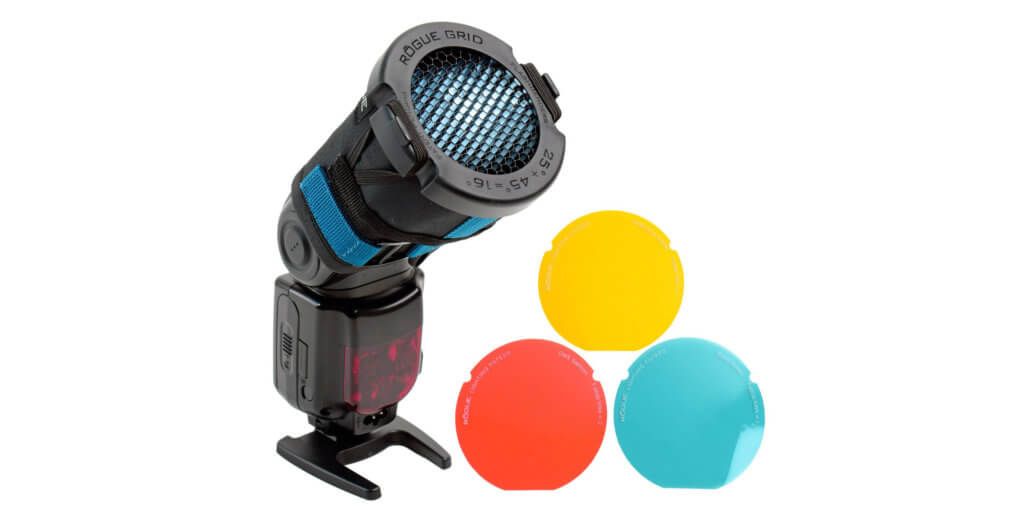 Firstly, to avoid confusion ExpoImaging are the guys behind all the photographic and drone accessories you see under the ExpoDisc, Rogue FlashBenders and FlatHat Labs brands. Today we will be looking into the ExpoImaging Rogue 3-in-1 Flash Grid Kit. This is essentially a 3-in-1 honeycomb grid setup which aids you in carefully sculpted and modifying light from a flashgun. Word of the day here being ‘very directional light.’

As with all light modifiers, they have specific purposes and produce their own type of light shaping. In the case of a grid the light is very concentrated with little spill, something like what a snoot would produce. They are also good at throwing the light quite a distance. You can of course make your own, but commercial versions are more convenient, better made, and should work straight out of the box without any messing about.

The ExpoImaging Rogue 3-in-1 Flash Grid Kit comes in its own nice little carry bag, a holder and the different grids included. The size on flash is 100mm long, 92mm wide, with the individual grids being 70mm wide. Individual grids themselves can be used on their own or stacked. These produce different concentrations of light, going from 16, 25 and 45 degrees.

You only get two grids in the package, which produce the 25 and 45 degrees and combined they produce the tight 16 degrees of concentrated light. The whole unit attaches to a flash head with a convenient grid flash strap. There are also salmon, yellow, & green gels included in the package. These are nice little inclusion, but if you’re going to start using different colored gels, you’ll probably want a bigger variety of colors at your disposal.

In essence, the ExpoImaging Rogue 3-in-1 Flash Grid Kit is quite a simple and small package that can be quickly set up on your flashgun of choice.

What is the resulting light like with these grids attached to a flashgun? For starters, the grids are going to give three different types of light concentration. Basically, like different sized spotlights. The 16-degree grid gives the smallest spotlight, the 25-degree version the next widest and the 45-degree grid is the widest overall.

The quality of light given off from the grids is nowhere in the region of being soft. The light is very directional and hard. Possibly more so than bare flash, but as the light beam is concentrated with the grids, the light draws your eye to specific parts of an image.

Which grid and combination you choose will depend on the size of the subject you want to illuminate or how much of the subject you wish light to fall upon. Using the 45-degree grid on a small object generally throws more than enough light to cover the whole subject. On a larger subject, the same grid gives almost a large spotlight effect. One initial realization is that the flash power needs to be increased as the grids reduce light output. This is where a bit of experimentation was in order.

Using the 25-degree grid on a small subject, the light spill is very little, serving to light up a small area. The 16-degree grid, which combines both grids together, produces the tightest light source. This can be used to replicate a very narrow shaft of light, possibly to highlight a specific area of the subject. The distance of the flash from the subject also makes a big difference (the inverse square law thing), which means, in reality, some experimentation will be needed for the exact look you need.

With a bit of playing with the position and height of the flashgun, I found that above the height of the subject and to each side with the 45-degree grid could produce a nice hair or rim light. Positioned right above a subject gives a nice focused beam of light, sometimes producing a rather moody feel, especially on a black background. This is what a grid seems to be good for, a moody, dramatic look which works well on a dark background. However, they also work well for brightly lit scenes to really focus the eye on an area.

You may be thinking at this point that a snoot does more or less the same job. Just wrap some sort of tube around your flash head and you’re good to go. Snoot and grids though give out different qualities of light. Using a grid, the light beam is more focused, so there is less light spill. This isn’t a good or bad thing, it’s just different depending on the quality of light you are after.

As the light is so directional, it has to be aimed right at the subject. A few test shots usually nail the positioning, but it also helps with experimentation as you may find light coming from a slightly different angle can illuminate the subject in more interesting ways.

How Does the ExpoImaging Rogue 3-in-1 Flash Grid Kit Compare?

As comparisons go, on flash grids are really simple accessories at a cheap price, which means the competition doesn’t really have anything more to offer or there are cheaper, not as well-made units. Another reason why we haven’t included the usual comparison chart below. This means that if you’re in the market for small on-flash grids, then the ExpoImaging Rogue 3-in-1 Flash Grid Kit is a good option.

The ExpoImaging Rogue 3-in-1 Flash Grid Kit does what it says on the box and provides grids that easily fit on a flashgun with three different angles. The light these grids produce is for a specific job, producing very directional light. In other words, they are not in the category of things like the Gary Fong Lightsphere which throws light around everywhere to illuminate a wide range of subjects. This grid kit is more specific in its lighting application.

If this is exactly what you need then this kit it’s a great solution. It’s inexpensive and can be easily tucked away into a camera bag with no complaints. It’s almost worth buying into to experiment with this type of lighting setup.

9
Score
The ExpoImaging Rogue 3-in-1 Flash Grid Kit is a simple to use grid kit which gives three different angles. Easy-to-use and a very cost-effective solution for on flash grids.