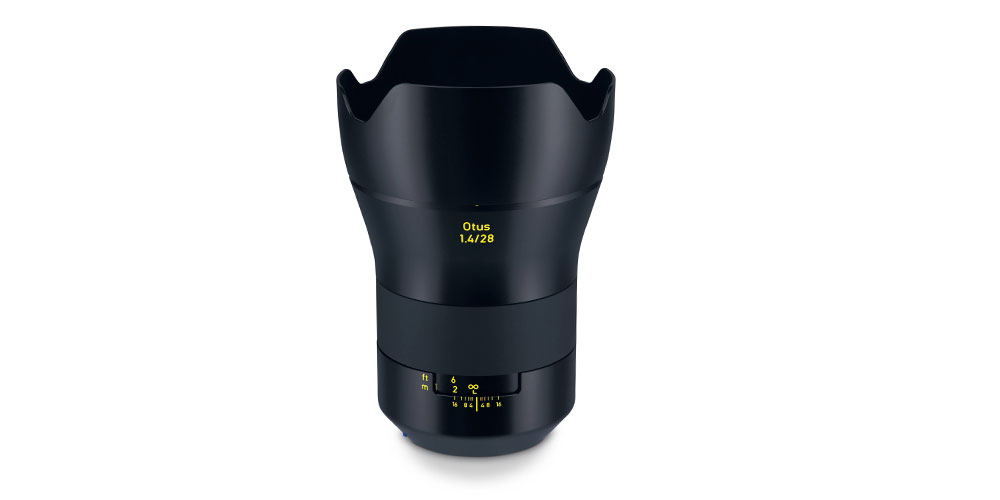 We all have those times in our lives where quality comes first above everything else. We can still keep a close eye on the overall price, but it’s the end results that are paramount. In the world of optics, the ZEISS name usually pops to the top of the list of being no compromise glass, providing quality that was only achievable previously from medium-format offerings.

In today’s roundup, we will be taking a sharp look at the ZEISS Otus 28mm f/1.4. This lens is relatively wide-angle, providing a 42mm viewpoint on crop sensor camera bodies.

In reality, when you’re laying down this much cash on a lens, it will be used on a full-frame camera. This means the ultimate applications will be for those who want to squeeze out the most definition from landscapes to architectural work.

I know that the overall outer look of a lens shouldn’t have any bearing on if a lens should be acquired, but in this case, ZEISS has done a great job of making the Otus range look as sleek and high-end as possible. Even with the accompanying lens hood attached, the lines on the lens curve like an hourglass, making you feel even more justified in the money you’ve spent.

Another reassurance of a high-end lens is its overall weight. In this case, the 28mm f/1.4 comes in at a hefty 1350g, signalling that there is a good deal of glass contained within.

Optically, the lens comprises of 16 elements arranged in 13 groups, containing eight anomalous partial dispersion and two aspherical elements. All elements have been treated to the renowned ZEISS T* anti-reflective coating which doesn’t just improve color and contrast, but also provides that certain look only found on ZEISS glass.

This lens is a manual focusing only design, and I can only imagine how much this thing would weigh with an autofocus system included. For its intended applications, manual focus isn’t too much of a hindrance. The outer shell of the lens has a manual aperture ring, which locks in at f/16, providing half-stop clicks and full-stops between f/11 and f/16.

For the actual focusing ring, ZEISS has opted for a smooth rubberized version, rather than the ridged type as found on many other lenses. The ring is extremely smooth to turn and very easy to hit focus with some patience.

The lens also features a distance scale with depth of field markings as traditionally found on most manual lenses. All written indicators on the lens are in a bright yellow hue, which is a nice simple addition, standing out quite well in low light conditions.

Overall, there is no faulting the build quality, with the total design characteristics echoing the quality of the optics within.

Usually, when dealing with a lens with a wide f/1.4 aperture, it’s largely usable, but also with a few discrepancies. Happily, the ZEISS Otus 28mm f/1.4 is very sharp at f/1.4 in the center of the frame, hitting its peak performance by f/4 and keeping up appearances until f/11.

The lens is still highly usable up to f/16, with only the edges being slightly behind the center for the most discerning. For those who want this lens for landscape shots, f/8 and above will provide excellent results all day long.

As you would expect, aspects such as chromatic aberration are mostly invisible to the naked eye, even on high contrast areas. There was no evidence of any blue or purple fringing even at f/1.4, which is great news for those who prefer shallow depth of field work.

Barrel distortion is also extremely low, with the small amounts easily corrected in post-processing. As for areas such as lens flares, the lens coatings do a fine job with no interference from bright sunlight.

As for overall image quality, we slapped the superlative ‘sumptuous’ in the title as that’s exactly what the results come out as being. The definition starts to stand out the most when zooming into small areas of an image, where definition is still available. Color and contrast are excellent, with a good deal of neutrality which is a great starting point for any further processing.

Manual focusing does take some deliberation, especially to hit the sweet spot. Like all things in life, practice makes perfect with regular use and constant reviewing of the distance scale.

As the ZEISS Otus 28mm f/1.4 is available for both Canon and Nikon mounts, we have to look at both these camps as possible alternatives. For the Nikon platform at this focal length there is the AF-S NIKKOR 28mm f/1.8G and for Canon the EF 28mm f/1.8 USM. The ZEISS wins for overall aperture width, but you can also buy a bunch of the Canon wide-angle and Nikon versions for the same price as the ZEISS.

If you really need an f/1.4 aperture for the Canon or Nikon platform, then you will have to go wider to 24mm. This focal length is more suitable for landscapes but may be a touch too wide if you want to venture into the likes of portrait photography. The ZEISS ultimately wins out for sharpness across the frame and like all products that obey the rules of diminished returns, to achieve this jump up in quality you will have to pay the price.

The ZEISS Otus 28mm f/1.4 almost stands on its own at 28mm and offering an f/1.4 aperture. Most other offerings come in at 24mm and while you can’t deny the versatility and speed of a f/1.4 aperture, for this type of money you had better find a good use for it on a constant basis.

When it comes to the overall quality of output, there’s no denying the results. The quality of images are outstanding, with little to no lens anomalies that need correcting in post-processing. The lens also has that certain ZEISS look, which as they say is verging on medium format territory. This means that for sheer quality of results, this lens is a no-brainer.

However, being a manual lens coupled to the highest resolution cameras means more deliberation over precise focusing to pull out the lens’ ultimate definition. But if this aspect is not a hindrance to your shooting style and you have the spare cash, the Otus is up there as one of the best lenses at this focal length.

9
Score
The ZEISS Otus 28mm f/1.4 is a top-notch quality prime lens, verging on the wide-angle for the most discerning. It may be a manual focusing offering, but the optics are some of the best in class.