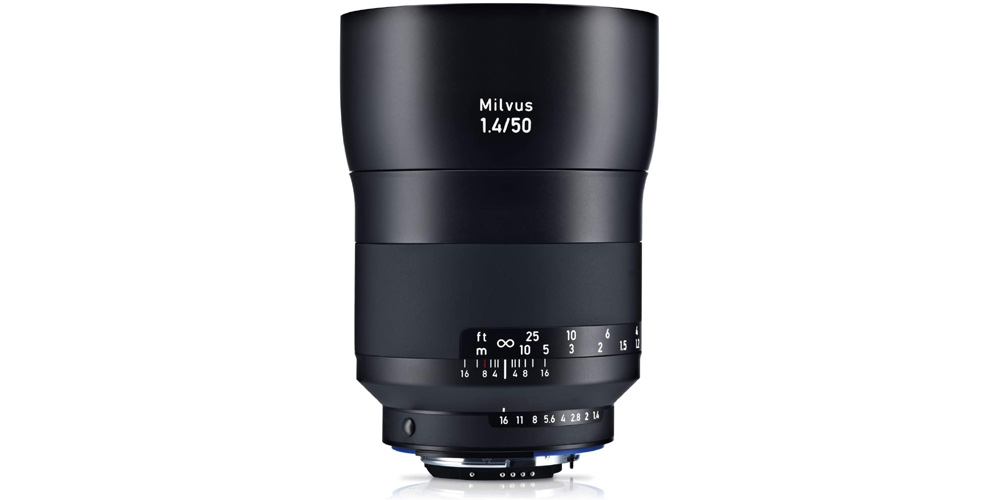 When it comes to camera optics, there will always be examples that leave you cold as a fish or ones that make you giddier than a kid in a candy store. ZEISS has always been a brand that produces the sweetest optics, which is why we are taking a closer look at the ZEISS Milvus 50mm f/1.4.

On ZEISS terms, the Milvus range is more affordable than the gorgeous Otus line, while still providing that expected level of optics. The Milvus range has 11 lenses in its lineup, ranging from a 15mm to a 100mm. With today’s test subject being a 50mm version, it provides a 75mm viewpoint on crop sensor cameras.

One aspect of high-quality lenses that always seems to ring true is their heavyweight nature. In this case, the ZEISS Milvus 50mm f/1.4 weighs in at 875g and is not exactly the usual tiny 50mm lens which comes from other manufacturers of old. However, strapped to a traditional DSLR, the lens feels very well-balanced and very easy to gain a firm grip upon.

This is a fully manual focusing lens, featuring a large and very tactile focusing ring that takes up most of the barrel’s real estate. The ring itself has hard stops at each end and is very smooth-turning to hit precise focus.

The lens barrel features a depth of field scale and has been fully weather-sealed to protect against dust and moisture. The included aperture ring can be de-clicked if you’re going to use this lens for video work.

Optically, the lens comprises of 10 elements arranged in nine groups, including four anomalous partial dispersion, and one aspherical element. These elements help to correct the likes of chromatic aberration, while increasing definition and sharpness.

The aperture on this lens comes in at f/1.4 which should make it a good worker in low light conditions, as well as a nice option for shallow depth of field shots like portraits.

As you would expect from a high-quality prime lens, the ZEISS Milvus 50mm f/1.4 displays very little in the way of lens anomalies. Chromatic aberration, which usually turns up in the form of purple or blue fringing, is very low to non-existent, only being seen in a few examples in very high contrast areas.

When the aperture is set to f/1.4, vignetting is visible in the corners bu starts to dissipate by f/2.8. To achieve the cleanest shots, the aperture will need to be stopped down to f/4. But any aspects of vignetting can be easily corrected in the likes of Lightroom or Photoshop.

One of the main selling points of a lens with an f/1.4 aperture is not just speed, but also bokeh effects. The nine-blade rounded diaphragm produces a very smooth looking background blur with a very appealing transition of colors. Highlight balls look very rounded and there were no jittery colors on very complicated backgrounds.

Levels of sharpness are always going to be a critical factor on any lens. The ZEISS Milvus 50mm f/1.4 produces very good center sharpness at f/1.4 with the best results coming in between f/2.8-f/11.

Once the lens hits f/16, diffraction starts to take a toll across the frame. Edge sharpness is only slightly behind the center, with peak results coming in between f/4-f/11.

If you’re going to spend around $1000 on a 50mm prime from a third-party maker, then one fair opposition is the Tokina opera 50mm f/1.4. The Tokina comes in just under the $1000 price point and although it may not have the street cred of the ZEISS, it can definitely deliver results.

The Tokina also benefits from an f/1.4 aperture, while also having autofocus. There’s no faulting the sharpness of this lens, and just like Sigma’s Art series, the opera line has poured all its quality into the optics.

The ZEISS Milvus 50mm f/1.4 may be a touch ahead in overall optical performance and rendition, but as it’s a manual-focusing lens, it may not be the most suitable for everyday fast-moving objects.

For those who aren’t used to manual focusing all the time, this feature takes some practice, but is far easier to use on the likes of the Sony a7R II with an adapter and built-in peaking levels. In other words, if your chosen subject matter is mostly static, then you will be far happier with this lens.

On the other hand, the very capable Sigma 50mm f/1.4 Art is a fine piece of glass that has autofocus but lacks the weatherproofing of the others. This lens is wonderfully sharp where it counts and if you’ve tried any of the other Art lenses, you won’t be disappointed with the end result.

Optically, you cannot fault the ZEISS for drawing out all the resolution from the latest DSLR cameras, but its really going to shine for those who can deliberate over focusing rather than those who want a run-and-gun solution. If you need a lens that is faster to react, then the Tokina above or the equally capable Sigma 50mm f/1.4 Art may be a better solution.

The only downside of the ZEISS is that it displays slight amounts of chromatic aberration with the aperture wide open. However, in most instances, you’re going to be hard pushed to produce any type of blue or purple fringing.

If you’re already eyeing up this lens against the far more expensive Otus offering, it can deliver nearly the same results at a far lower price point. The ZEISS Milvus 50mm f/1.4 definitely delivers on the optics front, as long as you don’t mind a fully manual focusing lens.

9
Score
The ZEISS Milvus 50mm f/1.4 is a very high-quality standard-view prime lens which benefits from the usual ZEISS level of optics. It's a wonderfully sharp lens but has the slow workings of manual focus.