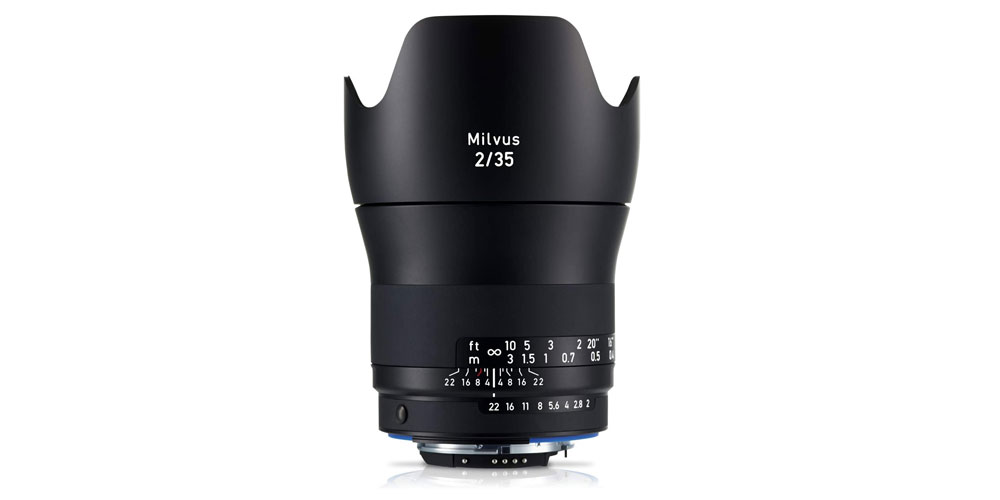 There’s always a sense of regality when a ZEISS lens is strapped to a camera. This point doesn’t just come from knowing you have some of the best quality optics in your hand, but also with the latest designs, an extremely slick looking lens. I know that the look and design of a lens shouldn’t be of primary importance, but when you lay down a fair bit of cash on any optics, it helps to have something that looks the part.

The ZEISS Milvus 35mm f/2 slots into the ZEISS range between the regular DSLR offerings and the top-end Otus lenses. Also, being a 35mm prime, the lens needs to cover a lot of bases, being one of the most favored standard focal lengths. This also means that the lens has a good deal of competition from not just same-as-camera brand versions, but also other third-party offerings.

First and foremost, the ZEISS Milvus 35mm f/2 is a manual focusing only lens, which means the only external features are the focusing ring, distance, and depth of field scales. The lens itself can be used on both full-frame and crop sensor cameras, with a 52.5mm equivalent focal length available on the latter. On crop sensor versions this provides a very near to the other standard of 50mm.

The lens barrel itself is fully weather-sealed, with a full metal and rubberized feel, weighing in at middleweight 649g. Internally, the optics comprise of the usual amount of high-quality ZEISS glass, which includes a Distagon optical concept with one anomalous partial dispersion element and the highly acclaimed T* anti-reflective coating.

The manual aperture ring has distinctive clicks, which can be ‘de-clicked’ for video work with the included special tool. A metal lens hood slots seamlessly onto the front of the lens, smoothing off the overall design, rather than looking like it’s been bolted on in a hurry.

The intriguing factor about this lens is that it has an f/2 aperture. At this level, an aperture around f/1.4 or even f/1.8 would be expected. But obviously ZEISS has done this for a reason. Maybe to slot nicely into the overall range or perhaps it’s the best solution for the design as a whole.

As the Milvus 35mm f/2 is a fully manual lens, it’s not really a run-and-gun solution, but rather something you need to deliberate over. Ideally, you need to employ zone focusing to get the best results, with constant reference to the distance scale and/or live view. This method takes some practice, but once you’ve sharpened your chops in this area, it’s a good solution for the likes of landscape photography.

One of the reasons for owning a ZEISS lens is the particular image rendition, which largely comes from the special element coatings. This lens provides that certain ZEISS look, which is very natural, with a good degree of contrast and saturation.

When the aperture is wide open, there is a slight amount of purple fringing on very high contrast areas, but quickly goes away by f/2.8. But this aspect can be easily removed in post-processing.

For overall sharpness levels when the aperture is set to f/2, the center of the frame is respectably sharp, with the sharpest levels coming in between f/5.6-f/8. In this aperture range, the ZEISS is every bit as good as the competition, with lots of fine detailing where it counts.

Bokeh is one of the calling cards of this type of lens, with colors blending very well between in and out of focus areas. The ZEISS Milvus 35mm f/2 can’t achieve the more shallow depth of field as some of the competition, but it’s still very good for an f/2 lens.

If you’re dead set on owning a piece of ZEISS glass, no one is going to dissuade you. But if you still want pinpoint sharpness and pro-level output, then the Sigma 35mm f/1.4 DG HSM Art is getting rave reviews from all areas. Like most of Sigma’s Art lenses, it’s not exactly lightweight at 665g, but the optical quality more than makes up for the weight-bearing.

The Sigma lens is wonderfully sharp throughout the aperture range, with great bokeh quality at f/1.4. It beats out the ZEISS with its wider aperture, it’s almost as sharp in the middle of the aperture range, and comes in at a much cheaper price point.

However, the Sigma displays more chromatic aberration with the aperture wide open but it does offer autofocus. The autofocus system can be a touch slower than same-as-camera-make offerings, which is the only real downside to this lens.

With stiff competition from the Sigma above and the likes of the Tamron 35mm f1.8, the ZEISS Milvus 35mm f/2 has to have some solid qualities to stand out. There’s no faulting the overall image quality and the lens is built like a tank for all types of shooting scenarios.

As the lens is manual focusing only, it’s not going to be to everybody’s taste. But if your chosen subject matter is more static, then it’s a ZEISS lens that’s easier on the pocket than the Otus versions, with almost the same levels of image rendition.

But the Milvus 35mm is still quite expensive compared to the rest of the competition. For almost a third less money, the Sigma can provide a wider aperture with better low-light capabilities, autofocus, and equal amounts of sharpness where it counts.

However, the Milvus 35mm f/2 has the famous ZEISS quality image rendition, which is its own diplomatic immunity when compared to any other type of lens. That’s why ZEISS fans will deal with manual focusing and more narrow apertures to provide that certain professional look.

If you’re still juggling with the ideal 35mm prime lens to throw your money at, as usual, it’s a good idea to take each one of these lenses for a test drive before you buy. But if the ZEISS way of doing things is more your thing, then you’ve probably already made up your mind.

9
Score
The ZEISS Milvus 35mm f/2 is a high-quality standard focal length prime lens that is useful in a range of scenarios. The lens features good quality optics, but it's quite pricey when compared to the competition.