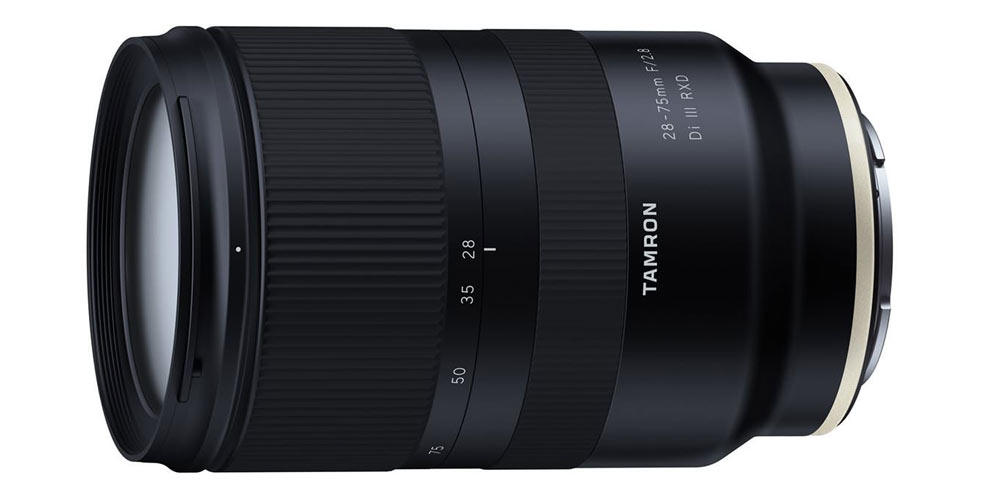 The Tamron 28-75mm f/2.8 Di III RXD is a hot new zoom lens for the Sony full-frame E-mount. It’s also the first zoom lens by a third-party maker specifically for Sony’s new range of mounts. The lens marks the start for high-quality zoom lenses offered to Sony mirrorless users such as the Sony a7Riii, Sony a9, and Sony a7iii.

The lens also benefits from a compact and lightweight design, along with the ability to take up close up shots with a minimum focusing distance of 0.19m wide and 0.30 tele.

The lens itself is only 117.8mm and weighs 550g, quite small and light for a top-quality lens in this focal range. At first, you would think Tamron would’ve made a 24-70mm focal length as this is the most common, but cutting down at the wide-angle to 28mm and making an all-plastic design has drastically cut weight.

Also, there’s already a Sony 24-70 mm f/2.8 Gmaster, which costs far in excess of this lens and weighs far more. Bearing this in mind all the weight saving is significant and matches the lightweight design of mirrorless bodies.

The aperture range on this lens goes from f/2.8-f/22 in 12 groups and 15 lens elements. The glass in the lens has XLD (Extra-Low Dispersion) treatment and hydrophobic Fluorine coating. Also, an Internal Focusing (IF) System which doesn’t change the extension length of the lens when focusing — allowing closer focusing. There are nine diaphragm blades, a 67mm filter size and comes in every conceivable color as long as it’s black.

The plastic barrel of the Tamron 28-75mm f/2.8 Di III RXD may at first not feel as robust as other metal outer shell lenses, but it’s built sturdy enough to take everyday use and has dust and moisture proofing.

The layout on the lens barrel is very simple and straightforward. The odd zoom ring sits at the front of the lens, with no other switches or complications. No image stabilization on this lens, which may not be such a factor with camera bodies with built-in stabilization, but older camera bodies may miss this feature.

You do lose a bit of wide-angle’ness with the Tamron 28-75mm f/2.8 Di III RXD compared to the Sony lens, but you do gain 5mm more at the telephoto end with the Tamron. When fully wide-angle and wide-open the center of the image is sharp with reasonable corners, some softening, but only a small amount. Stopping down increases overall sharpness, hitting its sharpest at f/8. At 75mm there is a little drop off in sharpness when fully wide open, which is cured when you stop down.

Vignetting is apparent at both ends of the range but can be easily rectified in postprocessing software. The lens can use correction in the camera, but in either case, it can introduce a little bit of noise in the corners of the image. Distortion and chromatic aberration are very low across the range.

Coupling a third-party lens to a camera body could in the past result in limited autofocus functionality. Adapters would ensure a nice fit between lens and camera, but it didn’t always mean complete communication like with native lenses.

However, the Tamron has been built specifically for the Sony FE mount. This means that all the lovely autofocus capabilities of the Sony such as Eye-AF or Direct manual focusing system can be used. This results in the Tamron 28-75mm f/2.8 Di III RXD focusing extremely fast and quietly due to the Tamron RXD (Rapid eXtra silent stepping Drive) focus motor. Manual focusing is not linear which may not be ideal for video work, but for stills, it’s a very quick way to zoom in on your subject.

Having an aperture of f/2.8 gives pleasing bokeh, not the best out there, but with simple backgrounds, you do get a pleasing blur. The close-up range on this lens is fantastic and really starts to open up ideas, like close-up, wide-angle, deep depth of field shots. It’s a fun way to use this lens.

The obvious competitors to the Tamron 28-75mm f/2.8 Di III RXD are the Sony 24-105mm f/4, Sony Vario Tessar 24-70mm f/4, and the Sony 24-70mm f/2.8 GMaster. The Tamron 28-75mm f/2.8 Di III RXD is brighter and image quality is generally better overall. In this respect and at a cheaper price point, the Tamron looks a better solution, especially if you wanted a happy medium between the other three lenses.

The Tamron 28-75mm F/2.8 Di III RXD may have some competitors from Sony’s own range, but if you consider the image quality you get for the money, this is definitely a good choice for this focal range. The compact size and lightweight will complement a mirrorless design extremely well.

It’s a shame that some of the wide-angle end of the range has been shaved off, but at least there’s a little bit more at the other end of the range as compensation. If you already have a wide-angle zoom, then they won’t be any problem, but it will really depend on how much you miss those extra few millimeters.

Overall, the Tamron 28-75mm F/2.8 Di III RXD provides good optics for the money, has fast autofocus and gives Sony users another option for some quality optics in this focal and price range. All things considered, you can’t get better overall quality in this price range.

8
Score
The Tamron 28-75 mm F/2.8 Di III RXD may have some competitors from Sony's own range, but if you consider the image quality you get for the money, this is definitely a good choice for this focal range. The compact size and lightweight will complement a mirrorless design extremely well.