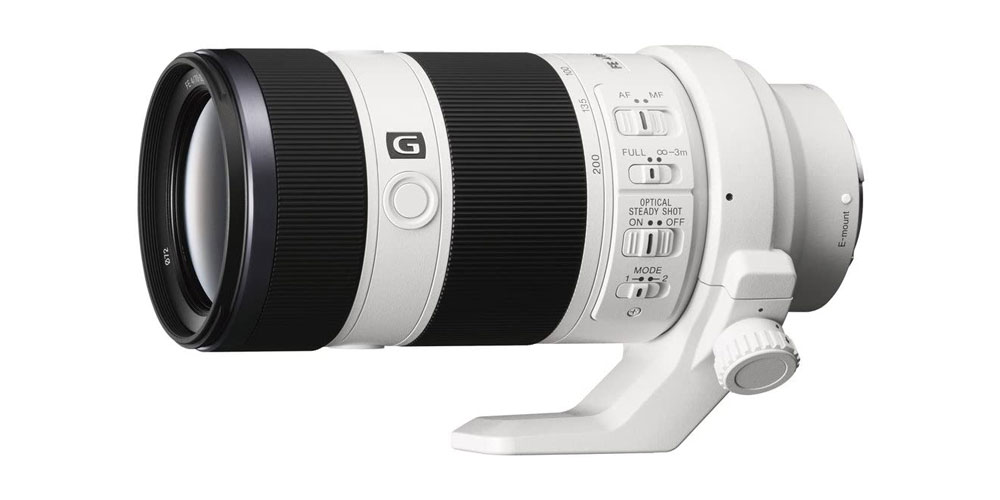 For anyone looking for a versatile telephoto zoom lens, the 70-200mm is the most popular option. This focal range has plenty of applications for the likes of wildlife, sports, action, and event photography, while also containing highly competent optics. The Sony FE 70-200mm f/4 G OSS is a more affordable version of Sony’s f/2.8 GM, with the lens still providing superior optics.

Just as with other same-brand 70-200mm versions, the f/4 type is essentially for those who don’t need the speed and low-light capabilities of an f/2.8 aperture. This lens will also suit those who can’t justify or afford the much higher priced f/2.8 version, but still want all the capabilities.

The build quality of the Sony FE 70-200mm f/4 G OSS is as you would expect from a G range Sony lens. The lens barrel is dust and moisture-sealed, with rubberized zoom and focusing rings. The whole lens barrel is made from solid and durable plastics.

The lens is also reasonably weighted at 850g, which is another benefit over its FE 70-200mm f/2.8 GM OSS sumo counterpart. The 70-200mm f/4 does come with its own tripod collar which can be rotated, but the lens is just light enough to be handheld for long periods of time.

As far as optics go, there is a good deal of glass contained in the lens with 21 elements arranged in 15 groups. This arrangement also contains a pair of extra-low dispersion, a super ED and aspherical element, and two advanced aspherical elements for better image clarity. Each element has also been treated to a Nano AR coating to better protect against flaring and ghosting.

The autofocus system comes with a dual linear motor with all focusing done internally. When in use, the autofocusing is extremely quiet which could make it a good application for video shooting.

The autofocusing system on this lens is extremely fast depending on which camera body you use. With the latest Sony camera bodies, Eye-AF locked on precisely and even worked well in low-light conditions. There were a few times where the lens tripped up, but these were mostly with very low contrast subjects and backgrounds.

The manual focusing ring operates with focus by wire, which means there can be a small delay depending on how quickly you turn the focusing ring. The close focusing distance for the lens is reasonable at 1m, but after 175mm it lengthens to 1.35m.

The stabilization system is basic and only has roughly two stops of compensation. This means that although you can get relatively low shutter speeds, it’s better to err on the side of caution and snap away to make sure you always get a sharp and clean image.

When it comes to general lens anomalies, the Sony FE 70-200mm f/4 G OSS has very good flare resistance, mainly thanks to the special lens coatings. The lens hood helps a lot with keeping out stray light rays, which should be worn as a pre-requisite. Chromatic aberration is thankfully very low, only seen minutely on very high contrast areas. Vignetting is also low with the aperture at f/4 and virtually disappears by f/5.6. Barrel distortion is also kept to a minimum at 70mm, with only small amounts of pin cushioning at 200mm.

The bokeh rendition is overall quite pleasing at close distances but does become more nervous looking at longer focal lengths. There are no complaints about highlight balls, being very rounded up to the edges of the frame, with only slight amounts of onion rings at the very edges. Obviously, the f/4 aperture won’t be able to isolate the subject from the background as well as the f/2.8 version, but it’s at least commendable in this department.

The sharpness of the lens looks very good in the center of the frame at f/4 and provides the best definition from f/5.6 and upwards. However, for the sharpest edge results, the aperture will need to be stopped down to f/8 across the entire focal range. Field curvature also affects the edge definition, which will need to be taken into account when capturing landscapes or architectural images.

A Canon lens is something you’d normally not recommend for the Sony platform, but the EF 70-200mm f/4L IS II USM can be easily attached with a range of adapters. Going down this route won’t provide you with advanced autofocusing features like eye AF, however. But the Canon is a more cost-effective lens and may arguably be a touch better optically.

Ultimately, the Sony FE 70-200mm f/4 G OSS is a good all-rounder zoom lens but doesn’t have a specific standout attribute. The center sharpness is very good at the widest aperture, but it does suffer from edge softness. Once the lens is stopped down, images have far more resolution in the corners, but this also counters the lens capabilities in low-light conditions.

The Sony FE 70-200mm f/4 G OSS does handle lens anomalies very well, with very little signs of chromatic aberration and good resistance to lens flare. The stabilization system is only average and the manual focusing takes some getting used to. Also, being a Sony product, it is a touch on the expensive side. But if you don’t see yourself working in low-light conditions and are happy with a general-purpose lens, it’s worth trying out with a relatively similar feature set to its f/2.8 counterpart.

8
Score
The Sony FE 70-200mm f/4 G OSS is a general-purpose zoom lens, which features good quality optics and a stabilization system. The lens doesn't have any standout attributes but will work as a very good all-rounder solution.