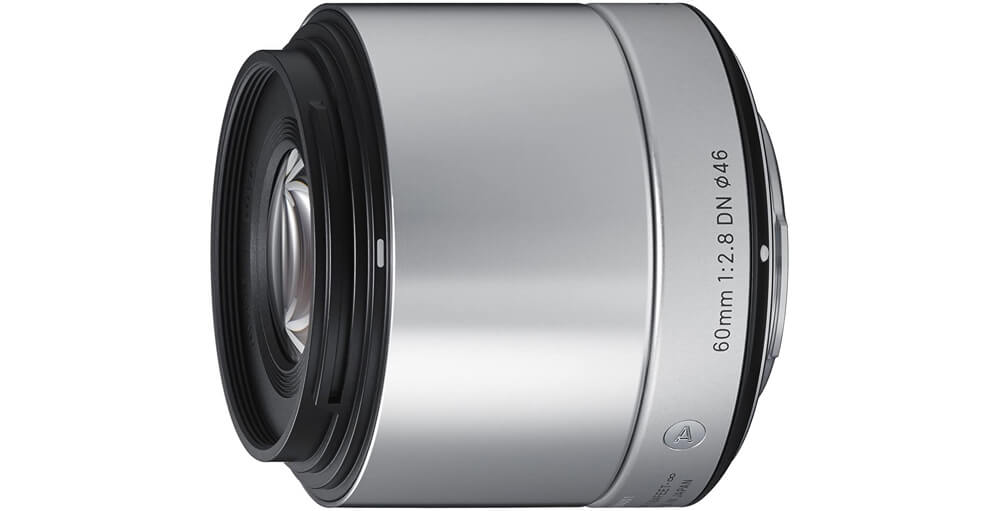 The Sigma 60mm f/2.8 DN Art lens is part of the mirrorless range of Sigma Art lenses, identified by the ‘DN’ specification. It used to come in either a Sony E-mount or Micro Four-Thirds mount, but the Sony E-mount version has been discontinued.

The equivalent focal length on micro four-thirds is 120mm, and on Sony E-mount, it’s 90mm. This puts the Sigma 60mm f/2.8 DN Art into the medium telephoto lens bracket which is a useful focal length for portraiture, landscape, and general photography. It comes in either a silver or black finish.

The Sigma 60mm f/2.8 DN Art is a fairly inexpensive lens, and Art range lenses have been made with image quality firmly at the forefront. Does this prime mirrorless camera lens live up to the good reputation of the other Sigma Art lenses? Let’s find out!

The Sigma 60mm f/2.8 DN Art is a good-looking but very minimalist type of lens. There are no external controls, no switches, no distance scale, or depth-of-field indicator.

The silver or black plastic lens barrel has been finished with the letter ‘A’, and it sports various smooth textures on the barrel, including the focus ring which isn’t ribbed. The lens mount itself is metal, but the lens does feel a bit cheap and flimsy, even if it looks good.

The 46mm filter thread is non-rotating, which makes this lens ideal for use with various types of lens filters like polarizing filters or graduated filters. The Sigma 60mm f/2.8 weighs only 190g and is 55.5mm long, so it’s a good choice for using on smaller camera bodies.

The Sigma 60mm f/2.8 has a minimum close-focusing distance of 55cm, so it’s by no means a good choice for macro work. It does produce good bokeh due to the seven rounded diaphragm blades, and the optics are constructed with eight elements in six groups. There is one aspherical lens element and Special Low Dispersion (SLD) glass to reduce chromatic aberrations.

While the Sigma 60mm f/2.8 DN Art isn’t the fastest lens to focus using autofocus, it’s certainly not the slowest. The linear AF motor makes the AF almost silent, too. Some may not like the feel of the smooth manual focusing ring after being used to the more common ridged variety, but the focusing control is good nonetheless.

When you tilt the lens while the camera is turned off or with the lens removed, you will hear a rather worrying-sounding rattle. Don’t be alarmed as this lens uses Sigma’s linear focusing system and the focusing group isn’t held in place when there is no power to the lens.

How sharp is this particular Art lens? Extremely sharp. The sharpness is amazing in the center of the frame at f/2.8 and pretty good in the corners. It’s razor-sharp all the way through to f/11 when diffraction starts to rear its ugly head, but even then it’s not massively noticeable. The softness does get steadily worse at f/16 and f/22, so it’s best to try and avoid using those apertures if you want sharp images.

Chromatic aberration is very minimal with the Sigma 60mm f/2.8 DN Art, and the only time you’ll notice any is when shooting at f/2.8. Even then, it’s only visible in the extreme corners if there are areas of high contrast.

Vignetting is a non-issue with this lens. At f/2.8, the corners are only a quarter-stop darker than the center, and at other focal lengths it’s not even noticeable. The Sigma 60mm handles distortion very well, and there’s only a very slight amount of pincushion distortion which is easily corrected in an image editing program like Lightroom Classic.

This lens is truly awesome when you shoot lower than f/11, and for most photography applications it won’t be difficult to keep this lens in its sweet spot. It’s a great lens for portraits, street photography, and fairly slow-moving subjects.

If you own a Sony E-mount mirrorless camera, you can either buy an old Sigma 60mm f/2.8 DN Art lens from when they were still made for Sony cameras, or you can buy the Sony E 50mm f/1.8 OSS which doesn’t cost a whole lot more than a brand-new Sigma 60mm.

It’s not quite the same focal length, but the Sony 50mm does have a faster maximum aperture of f/1.8, and it features image stabilization which gives you a good deal more flexibility in terms of hand-holding the camera at slower shutter speeds. The Sigma 60mm is better than the Sony 50mm when it comes to sharpness and image quality, but both lenses are great when stopped down to f/4.

If you’re looking for affordable prime lenses for your Sony camera, then there are some that stand out more than others, including the Sony 35mm f/1.8 OSS lens.

The Sigma 60mm f/2.8 DN Art is quite a bargain. You get amazing sharpness and hardly any image quality issues for a very good price. The build quality feels a little cheap and the knocking noise is quite disconcerting, although perfectly normal for that type of focusing system.

It’s a lean and stripped back lens that has a unique smooth look all over, but not everyone will like the non-ridged focusing ring. For the few drawbacks it has, the Sigma 60mm f/2.8 DN Art is still a winner in terms of price and image quality.

8
Score
This little lens is great value for the money, even if the build quality seems a bit plasticky. It's outstandingly sharp with very few image quality issues. It's a good addition to the Sigma Art range.