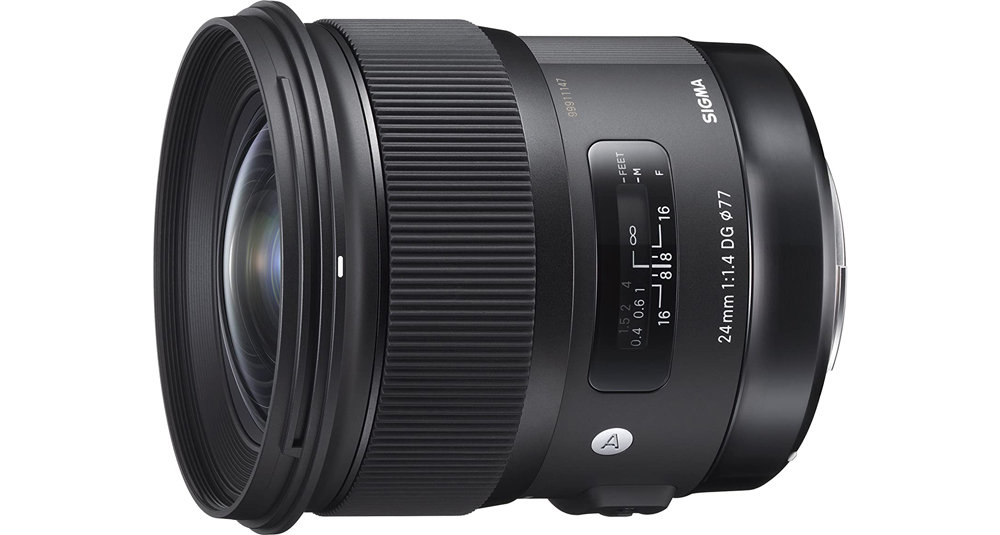 Today we’re going to take an in-depth look at the professional-grade Sigma 24mm f/1.4 DG HSM Art, and see if the performance matches its good looks. You could go with your camera brand and buy their 24mm lenses, or you could look at the usually cheaper but often just as good third-party lenses such as this Art series lens.

Many photographers will decide at some point that they want a 24mm lens in their collection, but which one should they choose? 24mm is a good focal length for wide-angle landscape photography, but it can also be used for wedding photography, street photography, video, and environmental-style portraits.

How does the Sigma 24mm f/1.4 measure up to name-brand lenses, and is it worth spending your hard-earned cash on? Let’s find out!

Sigma has put considerable time and effort into creating their Art range lenses, and they have been made with optical quality along with creativeness in mind.

This is a very sleek and stylish looking lens. If you are wondering what the DG stands for, it simply means this is Sigma’s designation for full-frame camera lenses. The HSM stands for Sigma’s HyperSonic Motor, which drives the autofocus system and is reputed to be fast and quiet.

The Sigma 24mm f/1.4 is well-built like the other Sigma Art range lenses, although they are not made from metal, but from Sigma’s Thermally Stable Composite (TSC) instead. The lens mount is brass for added durability, but unfortunately, the lens doesn’t have a rubber gasket on the rear mount, which means it’s not fully weather-sealed.

The focus ring turns nicely and isn’t too loose or too tight, and the AF/manual switch is well-placed on the barrel for easy use. The Sigma 24mm f/1.4 takes a 77mm filter, and the filter thread doesn’t rotate when focusing, which is a big advantage if you are using polarizing filters.

The lens is a decent size and weight (665 grams), and is not too bulky or unwieldy considering that it contains an impressive 15 lens elements!

Nine rounded diaphragm blades give attractive bokeh, even at large apertures. The maximum aperture is f/1.4, the minimum is f/16, and the minimum focusing distance is a decent 25 cm. The Sigma 24mm f/1.4 DG HSM Art looks impressive on paper, but let’s take a look at how it does in practice.

Starting with the autofocus, the HSM motor is exceptionally quiet and quick to lock on to focus. Some users have reported inconsistencies with this lens, but I didn’t find it an issue with the Canon fit lens.

An interesting feature on the Sigma website is the Sigma USB Dock and the Sigma Optimization Pro software which allows the user to update the firmware for the lens and to adjust focus position and other parameters to create personal lens specifications.

When it comes to sharpness, Sigma threw everything they had at the Sigma 24mm f/1.4 DG HSM Art, and the results are very impressive, although it does have some issues at certain apertures. Center sharpness is incredible, especially f/1.4, and many rival lenses can’t get as sharp as this one even when used at smaller apertures.

Corner sharpness isn’t so good at f/1.4, but it gets better at f/2.8 and by the time you get to f/5.6, the extreme corners are razor sharp. It does show some vignetting in the corners at wide apertures, but that does tend to be a trait of most wide-angle lenses. At f/1.4 the corners are around three stops darker than the center of the frame, but by f/2.8 it becomes hardly noticeable.

Chromatic aberration is very much a non-issue with this lens, and lens flares are also kept under control, although they do become stronger at f/16. Prime lenses generally have an advantage over the widest focal length of a wide-angle zoom lens in that they are almost distortion-free. The Sigma 24mm f/1.4 is no different, with just the smallest amount of barrel distortion.

Bokeh quality is very good for a 24mm lens, and the Sigma 24mm f/1.4 DG HSM Art outperforms Canon and Nikon equivalent lenses in this regard.

Although the Sigma 24mm f/1.4 DG HSM Art lens is by no means cheap, it’s fantastic value when compared to the Canon and Nikon 24mm options.

The Canon EF 24mm f/1.4L II USM doesn’t significantly outperform the Sigma 24mm f/1.4 in image quality, and the Sigma does have a slight edge in sharpness at wide apertures. It also has less vignetting at wider apertures, nicer bokeh, and the chromatic aberration control is about the same as the Canon 24mm.

The Canon has less lens flare issues at narrow apertures and gives a bigger aperture range of up to f/22, but overall I feel that the Sigma 24mm is a much better value, costing around 50 percent less than the Canon lens.

However, the Sigma 24mm is not totally weather-sealed, while the Canon lens is. This may be an issue for you to consider if your photography takes you into wet or extreme weather conditions.

Nikon users looking for a good value 24mm prime lens should check out the Nikon AF-S NIKKOR 24mm f/1.8G ED as an alternative to the Sigma 24mm, while the budget Canon EF-S 24mm f/2.8 STM is a good choice for those looking for an affordable Canon prime lens.

The Sigma 24mm f/1.4 DG HSM Art is a very impressive lens. It gives the Canon and Nikon equivalents a run for their money and costs much less. Third-party prime lenses are often good value, so it’s worth shopping around.

Center sharpness is superb even at f/1.4, and it performs very well as far as chromatic aberration, distortion, and lens flare is concerned. It’s well-made and solid, but the lack of total weather-sealing is a bit of a let-down.

Overall, the Sigma 24mm f/1.4 is a serious contender for the crown of professional-grade 24mm prime lenses, and I was pleasantly surprised by how good it was.