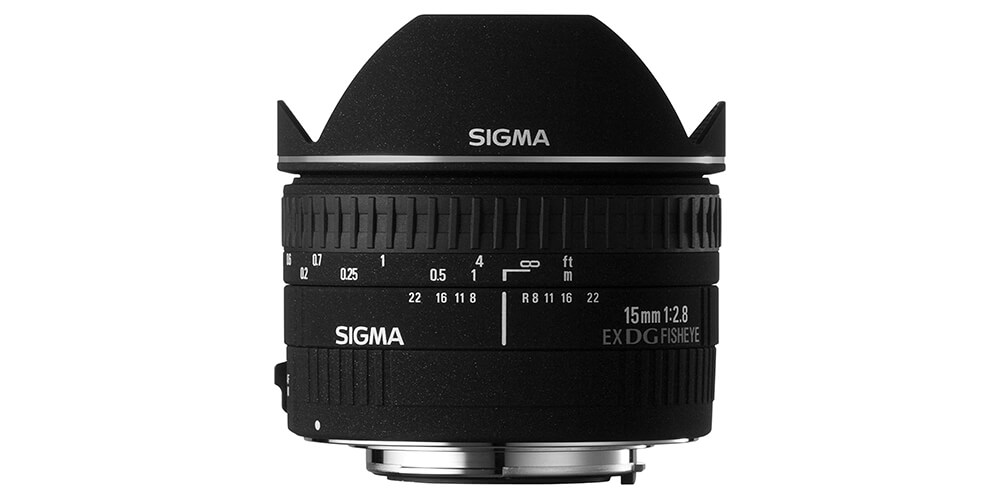 If you’re looking for a different perspective on things, then the Sigma 15mm f/2.8 EX DG Diagonal Fisheye might be the perfect lens for you. If you tire of the straight lines afforded by longer focal length lenses, yet don’t want to produce completely circular images, the Sigma 15mm f/2.8 EX DG is a good compromise between ‘normal’ images provided by standard lenses and the total roundness that the Sigma 4.5mm f/.8 Circular Fisheye lens creates.

The Sigma 15mm f/2.8 EX DG Diagonal Fisheye isn’t an everyday lens, and it’s not great for portraits unless you’re going for some distorted effects, but it can give you that ultra wide-angle 180-degree view to capture unique images.

Fisheye lenses like this one aren’t just for landscape images. It’s also a great lens for shooting sports like skateboarding and also for big events and street scenes.This lens comes in Canon EF-mount and Nikon F-mount at the time of writing, as the Sigma, Sony, and Pentax mounts have been discontinued.

The Sigma 15mm f/2.8 EX DG comes with a permanent petal hood attached in order to protect that rounded front element. It also comes with an adapter ring so you can put the lens cap on, but if you forget to take the adapter off before shooting you’ll end up with some serious vignetting on your images.

The Sigma 15mm f/2.8 is solidly built, although quite compact. It has a nicely-sized ridged focusing ring that is smooth and good to use throughout the range. The barrel has an AF/MF switch, and a distance scale too. The minimum focusing distance is only 15cm, which gives you plenty of scope for creativity, and the minimum aperture is f/22 while the maximum is f/2.8.

Adding lens filters to a fisheye lens like the Sigma 15mm f/2.8 EX DG is difficult for obvious reasons, so Sigma has added a filter holder at the rear of the lens for gelatin filters. Optically, the lens is constructed with seven elements in six groups and has seven diaphragm blades. Sigma has added a multi-layer coating that is meant to reduce flare and ghosting while giving accurate color balance and good contrast.

The Sigma 15mm f/2.8 EX DG Diagonal Fisheye In Use

Fisheye lenses are fun to use and can create some beautiful images, but what’s the image quality like on the Sigma 15mm f/2.8?

First off, this lens is sharp, which will please landscape photographers. When shooting wide-open at f/2.8 there is a bit of softness, but that disappears as you stop down. From f/5.6 to f/16, sharpness is excellent. Colors and contrast are very good with this lens, probably due to the multi-layer coating. There were no issues with flare or ghosting, but there was some minor chromatic aberration.

Bokeh isn’t brilliant, but it’s not bad, and bokeh fans probably won’t be using a fisheye lens anyway. As for the AF, it’s fast and smooth, and the MF experience is good too.

The bright maximum aperture of f/2.8 makes it easy to work in low-light conditions, but it doesn’t have image stabilization built in. It produces excellent images close up and far away, and the minimum focusing distance of only 15cm gets you some awesome close images. This is a fisheye lens that does exactly what it was designed to do and does it surprisingly well.

The one major drawback with the Rokinon 12mm f/2.8 is that it’s manual focus only, so if you’re not into MF then it’s probably not for you. It’s also not for you if you specifically want those killer curves that the Sigma 15mm f/2.8 EX DG Diagonal Fisheye brings.

That being said, the Rokinon 12mm f/2.8 ED AS IF NCS UMC has perhaps a wider scope of use than the Sigma 15mm f/2.8. The Rokinon is a great choice for urbex and caving photographers as well as extreme action sports, astrophotography, and landscape works.

The Sigma 15mm f/2.8 EX DG Diagonal Fisheye is a solid, well-built fisheye lens from a respected manufacturer. It’s not exactly cheap, though, and you’d have to use it a lot to get your money’s worth out of it. However, it’s a great deal cheaper than a lot of the fisheye lenses available from Canon and Nikon.

Fisheye lenses are very much a niche type of lens, but if that’s what you’re into, this lens will do everything that you want it to, from sports or big events to landscape photography, all with that unique perspective that a fisheye lens brings.

Of course, fisheye lenses are a lot of fun to use! There’s a fair bit of choice available in fisheye lenses for Nikon and Canon mounts to suit all budgets, so it’s worth looking at them all before you make your choice.

8
Score
The Sigma 15mm f/2.8 EX DG Diagonal Fisheye is an excellent choice for those who are looking for a quality fisheye lens. It's sharp through the range except at the corners at f/2.8, and it gives a pleasing, curvy distortion to your images without being OTT.