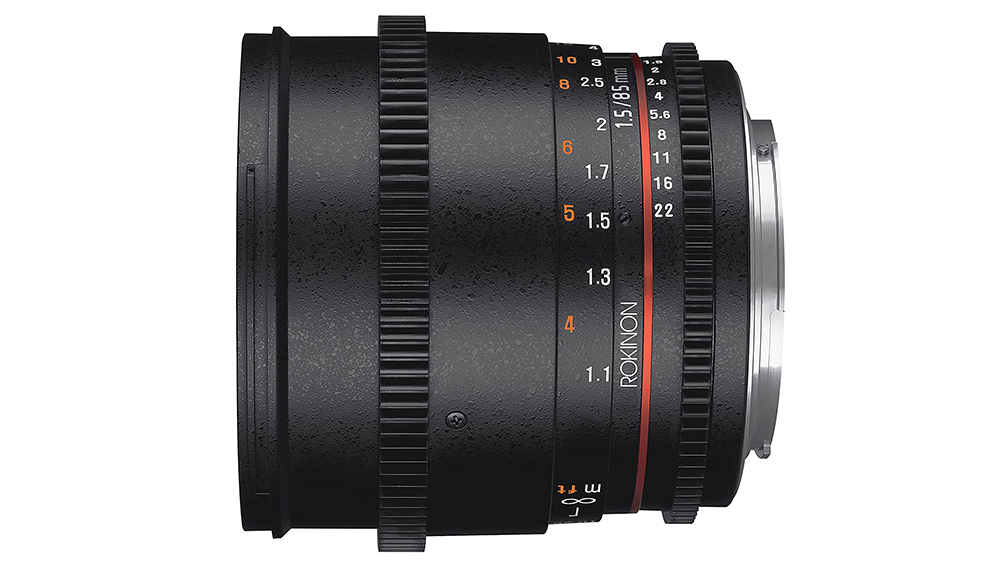 The Rokinon 85mm T1.5 lens is an integral part of the Rokinon prime set, a ubiquitous kit for filmmaking. The lenses are a solid choice for beautiful images, reliability and consistent workflow on set.

The 85mm in particular produces lovely images, reproduces color well, and is consistent in focus and bokeh. For this evaluation, I’d like to compare the lens to a comparable ZEISS lens, the CP.3 85mm T2.1 Compact Prime lens.

The Rokinon cine lenses are built with aluminum and plastic, as expected in budget lenses, though they are solidly built and able to endure the rigors of corporate videos and short films.

When cared for, they provide years of service and reliable images. They handle lens flare well, although not quite as well as the comparable ZEISS, but in this day and age, with cinematographers choosing to use lens flare as a style, the Rokinons perform admirably.

The lenses handle halation well, and work seamlessly with matte boxes, follow-focus equipment, and other camera rig accessories. The focus and aperture rings are smooth and functional. They are black with red accents, but that shouldn’t really matter – it’s all about function.

Working with the Lens

I once saw an editor speak, and he contended that a fast editor is a better editor because the fast editor gets through the functional work more quickly and can spend more time on the art, and I wholeheartedly agree with the mindset.

Filmmaking is problem-solving. Anything that requires you to solve problems sucks time from your schedule, so when you find things that reduce the possibility of problems, those things are valuable, because they allow more time to make art.

Rokinon did the artist a favor with their cine lenses, and the 85mm is a perfect example. I’ve worked with this lens repeatedly, in different mounts with different cameras. The lens mount is solid and well designed, providing a smooth interaction with the camera and a tight, solid fit.

The focus gear works with standard gears and is where your hand would expect it on the lens. The aperture ring is smooth and linear, providing accurate feedback in both directions. The front of the lens is a 72mm opening, with a multitude of filters available in this common size. Most matte boxes are made to accommodate this width.

If you use the same camera with a ZEISS and a Rokinon lens, you’ll notice very small differences. ZEISS lenses are a tiny bit sharper, and this is more true when comparing at the wider apertures. A ZEISS lens will have a more pleasing bokeh than the Rokinon.

But honestly, you’ll only notice the difference within a foot of an enormous monitor. For the vast majority of applications, the two lenses are indistinguishable. Is your video going to be on YouTube? A Rokinon is fine. Playing in a theater? Maybe go with a ZEISS.

On the issue of sharpness, the different focal lengths in the Rokinon range vary greatly. The 85mm, in my opinion, is probably the sharpest of the bunch. The 16mm is noticeably soft.

Ultimately, if you’re lighting and composing well, the viewer won’t notice the difference, particularly on the Rokinon 85mm T1.5. It has crisp focus at all distances, the depth of field is accurate and predictable, and the images are sharp where they’re in focus and lusciously soft where you want them to be.

With all the variables available to a filmmaker – lighting, art direction, performance of the actors – the lens that captures the art should be the one you use. If you’re challenged with building a kit on a budget, the Rokinon 85mm T1.5 (and the 35mm) would be my first choices for purchase, because I end up using those focal lengths the most, whether for a film, an interview, product shots, or even environmental b-roll.

Additionally, with a B-camera, those two focal lengths make interviews a dream because the images match well. The focal lengths are far enough apart to provide an adequate difference, while being close enough to make it feel like the same style. Add good lighting, a slider, and a little makeup, and you’re doing broadcast quality work. And yes, the Rokinons are plenty good enough for broadcast – I guarantee you’ve seen their images on TV.

I’m comparing the lenses in their Canon EF mount iteration because they are commonly used, and we’re comparing an apple to an apple. The specs are very similar, except for weight – the ZEISS is more than 50 percent heavier, based on larger optics, more aluminum and less plastic. Oh, and one of the apples costs 10 times the price of the other, so take that into consideration.

If you want a ZEISS lens, please get it, but if you’d prefer to get a pretty darn good knockoff, plus a used car to drive it around in, the Rokinon 85mm T1.5 is a good choice!

9
Score
The Rokinon 85mm T1.5 produces lovely images, reproduces color well, and is consistent in focus and bokeh. When comparing it to the ZEISS CP.3 85mm T2.1, you’ll notice very small differences. ZEISS lenses are a tiny bit sharper and will have a more pleasing bokeh. But honestly, for the vast majority of applications, the two lenses are indistinguishable.