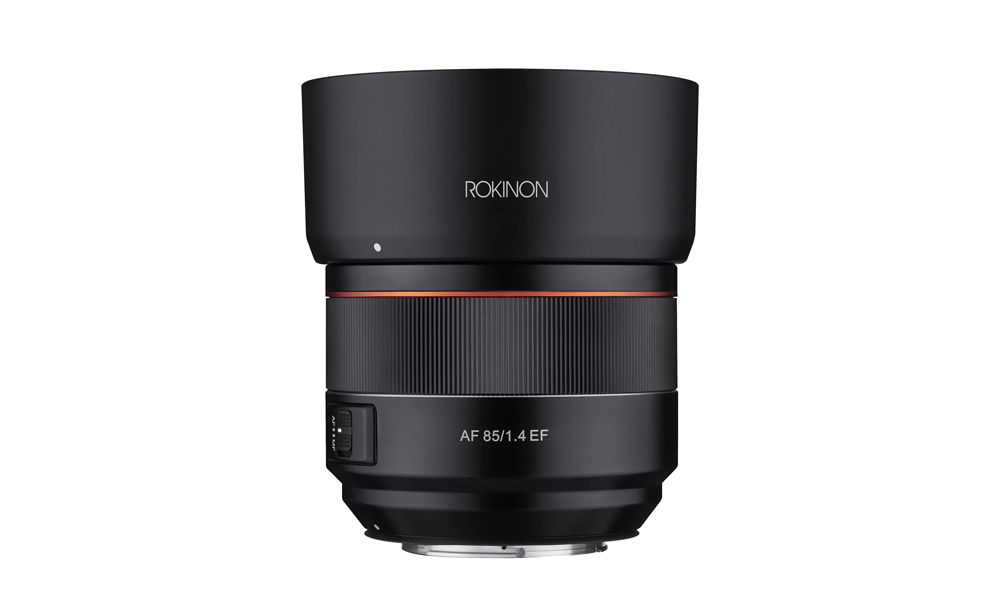 The Rokinon 85mm f/1.4 AF is a full-frame lens made for a variety of camera mounts. It comes as an autofocus version, which is a welcome addition by Rokinon as previous versions were manual focus only.

Rokinon has always been known for manual focus lenses, but it’s trying to establish itself as a reliable budget brand with its new autofocus technology. While the 85mm f/1.4 certainly isn’t going to rival any of the major heavy hitters in the 85mm range, the price for the Rokinon 85mm f/1.4 AF reflects that.

An 85mm is a classic portrait prime lens length and one that every photographer should have in their lens collection. We’re going to look at how the Rokinon 85mm f/1.4 AF measures up, as well as the design, build quality, and how it performs in use.

The lens used in this review was a Canon EF-mount version on a Canon EOS 6D camera. The Canon EF or Nikon F-mount options for this lens have a different design to the earlier Rokinon 85mm f/1.4 AF lens for Sony E-mount cameras.

The Rokinon 85mm f/1.4 AF is quite a bulky lens for an 85mm, weighing in at 568g. The build quality is very good, and the updated version of this lens has an all-metal construction. It has a good, solid feel, and there is also weather-sealing to give dust and water-repelqWQ1lent capabilities, which is very good considering this is a budget lens.

The lens barrel itself is rather minimalist, as there is no depth-of-field or distance scale available, though it does have an AF/MF switch and a nice, wide focusing ring. There are no hard stops at the ends of the focus range though, which is a drawback if you like to set your focus to infinity.

Rokinon use Ultra Multi-Coating on optical surfaces to reduce flare and ghosting, and they say it improves contrast and color accuracy.

The autofocus feature uses two Linear Ultrasonic stepping motors for smooth autofocusing, and this new version of the lens has an AF/MF switch as a welcome addition.

The Rokinon 85mm is a swift performer when it comes to the internal autofocusing, and it doesn’t hunt too much for focus points in bad or good light. The AF is quiet, so this lens is a good choice for shooting video as well as still photographs.

Nikon users have, however, complained in the past that their version of the Rokinon 85mm f/1.4 AF has been very poor on the autofocus accuracy. The manual focusing felt good, and the ring allows for precise adjustments, especially if you use preview in live view mode.

The lens is only around half the weight of the newest Canon and Sigma 85mm f/1.4 lenses, and it’s nicely balanced on the camera if you want to use it handheld.

As for sharpness, the center-sharpness at f/1.4 is a little soft but is better at f/2 and fantastic from f/2.8 upwards. Edge and corner sharpness don’t fare so well, though.

Distortion is almost non-existent, and flare and ghosting aren’t a problem with the worst seeming to be a small reduction in contrast when shooting into the light.

Lateral chromatic aberration control is good at f/1.4, but it becomes more of a problem as you go to narrower apertures, especially towards the edges, where the fringing can be pretty obvious. Bokeh quality is good and has a rather unique, vivid look to it.

The Rokinon 85mm f/1.4 AF has several rivals, but it depends on how much you want to spend. The Sigma 85mm f/1.4 DG HSM Art is super-sharp and outstanding, but it costs twice as much as the Rokinon 85mm.

If consistent sharpness across the range and image stabilization is important to you ( it makes shooting in low light conditions handheld so much easier), then you would be better getting the Tamron 85mm f/1.8 than the Rokinon 85mm f/1.4.

The Rokinon 85mm is much more compact than either of these two lenses, though, and while it does have its issues with focusing on some camera brands and chromatic aberration problems, it is a solid, comparatively cheap prime portrait lens that can give some unique and interesting bokeh.

The Rokinon 85mm f/1.4 AF is a reasonably priced lens that can give good results, but it does have its problems with edge sharpness and CA. It’s not perfect, but the price reflects that, and it can produce some very good images. Build quality is excellent for the price, and the inclusion of weather-sealing is a nice touch.

This lens will suit portrait and still life photographers who need an affordable workhorse lens and who don’t mind doing a little fixing of chromatic aberration in image editing software, such as Lightroom Classic.

7
Score
The Rokinon 85mm f/1.4 AF is a nice and compact 85mm lens, but it does have its limitations with edge sharpness and chromatic aberration. It's well-built and weather-sealed, and the reasonable price makes it worth buying if you're on a strict budget.