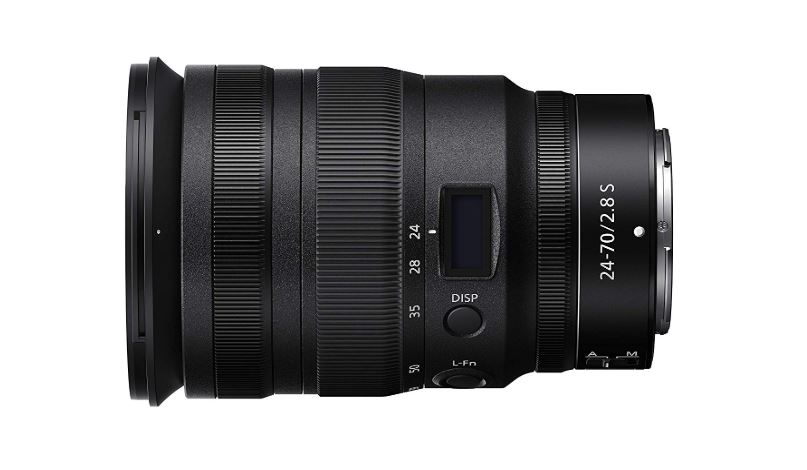 The Nikon NIKKOR Z 24-70mm f/2.8 S is a pro-grade and constant aperture zoom lens introduced for the Z-system mirrorless cameras of the company. This lens looks like a must-have for Nikon Z6 or Z7 users.

The NIKKOR Z 24-70mm f/4 S lens is already available for Z-system, but this newly launched optic has some significant advantages over that lens. One of those is the wider f/2.8 constant aperture and for the professional photographer who has made his mind to switch to the Z-system, this is a noteworthy upgrade – but he will have to bear some extra weight as this lens is considerably larger than the NIKKOR Z 24-70mm f/2.8 S and costs more than double.

Nikon claims that it has produced a lens with outstanding sharpness across the frame and they have been able to achieve this milestone by using the optical advantages of the wide NIKKOR Z lens mount and short flange-sensor distance. The company also claims that the Nikon NIKKOR Z 24-70mm f/2.8 S performs better than any of the other 24-70mm lenses available today.

The lens uses 17 elements arranged in 15 groups. Among these, there are two extra-low dispersion elements used to control chromatic aberration and four aspherical elements that help minimize the spherical aberrations and distortion.

A range of different coatings have been used to treat the elements such as Fluorine Coating on the front and rear elements that helps prevent the water, dust, and grease from getting into the lens and the Nano Crystal Coating – an anti-reflective technology which solves ghost effects caused by red light and reduces ghosting and flare effects caused by light entering the lens diagonally. This would result in sharper, remarkably clearer and high contrast images and videos.

The NIKKOR Z 24-70mm f/2.8 S also features Nikon’s new ARNEO coating – another anti-reflective technology which is to compensate for the light entering the lens from vertical angles.

A stepping motor has been used in the lens to handle autofocus, and also the latest multi-focus system. This helps you keep the focus speeds fast, no matter how far the subject is. You can also adjust the focus position manually without leaving autofocus using the Full-time manual focus option.

Vibration Reduction System is not available on this lens but currently there are compatible bodies available that come with this system inside and you would still be able to use this technology using this lens.

There isn’t any aperture ring available on this lens, but you will find a small electronic display which can show you aperture values, focal length, focus distance and even depth of field. This is an amazing addition especially for the landscape photographer and for other areas where it becomes really important to control the depth of field.

When the aperture values, changing focal lengths, and distances generate a lot of rapidly changing variables, then an electronic display like this becomes the only option for us to work with depth of field values with zoom lenses.

Obviously, this pro lens is not small and is built for Z-system. It offers the constant f/2.8 maximum aperture, which is one of the many things a professional photographer looks for in a standard zoom lens. It’s not as heavy as Nikon’s own 24-70mm f/2.8 VR DSLR lens (which is certainly among the best Nikon lenses if price factor is not considered), but it weighs almost as much as the Sony’s 24-70mm f/2.8 G Master lens and remains just a few millimeters shorter.

If it is fitted to a Z7 body, the Nikon NIKKOR Z 24-70mm f/2.8 S feels quite big and its weight pushes the camera balance forward. But thanks to the substantial and very “holdable” bodies of the Z6 and Z7 that it doesn’t feel awkward to have a lens of this size on a compact body. However, it won’t be the same case if you attach it to Sony’s a7 series cameras.

It seems to be a good idea to have a digital OLED display on the lens to show the aperture values, distance and depth of field, but if you are shooting outdoors it becomes quite hard for you to read the display, however, it’s not the case in indoor lighting.

The focusing motor is generally quick to respond when tasked to activate focusing mechanism on subjects at different distances. It moves the elements inside the lens with a great smoothness from one position to the other. It’s almost quiet when shooting pictures but you can just about hear it when capturing videos.

The Nikon NIKKOR Z 24-70mm f/2.8 S focuses very fast. It can be more hesitant if you take it out for night-time shooting in some dimly lit conditions with low subject contrast, but this can be attributed to the AF of the camera and you can’t blame the lens’s response for this. In regular lighting conditions, on the other hand, the lens feels quite responsive.

Nikon’s NIKKOR Z 24-70mm f/4 S is a light, affordable and compact kit lens, yet it can be put on the list of top performer lenses due to its lack of distortion, sharpness and chromatic aberration control. The f/2.8 version performs even better.

The Nikon NIKKOR Z 24-70mm f/2.8 S is an impressive lens. At first, we thought that Nikon couldn’t do better than the NIKKOR Z 24-70mm f/4 S as it came with a great ability to control color aberration and distortion that it left a very little room for improvement. But the 24-70mm f/2.8 S is even sharper in the center, more sharp at the edges, and not only delivers higher levels of resolution, but also maintains an amazing consistency throughout the focal length and aperture range.

8
Score
For enthusiasts and travel photographers, the NIKKOR 24-70mm f/4 S lens is still recommended due to its small size and less cost, but obviously, the Z 24-70mm f/2.8 S with its top quality optical performance should be the preferred choice for professionals.