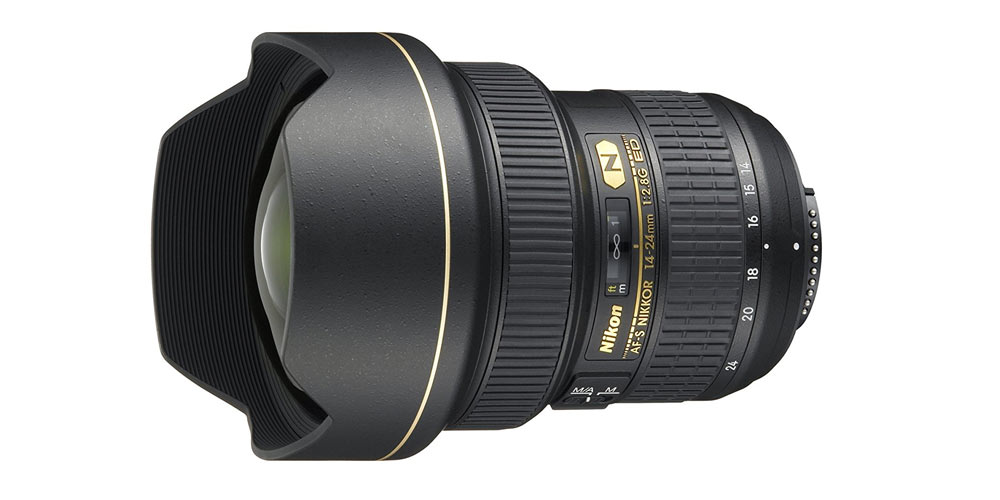 The Nikon AF-S NIKKOR 14-24mm f/2.8G ED was originally released in August 2007 and has proved a hit ever since, with excellent optical design and performance. Nano Crystal and Super Integrated Coatings on the lens reduce artifacts and with great color and contrast rendition makes this a great wide-angle zoom. However, the design is aging a little and it’s not without a few caveats.

Contrast and sharpness are standout points of the Nikon AF-S NIKKOR 14-24mm f/2.8G ED lens, along with being the world’s first ultra-wide angle zoom at 14mm and f/2.8. Working equally well on full-frame or crop sensors (21-36mm equivalent), it’s easily the first choice wherever a wide-angle view is needed from architecture to landscapes to wide-angle press images.

If you are going to use this lens on a crop sensor, the extra 7mm of view may be significant, so you may want to opt for a lens that is a bit wider such as the Nikon AF-S DX Zoom-Nikkor 12-24mm f/4G IF-ED.

The full name of this lens is the Nikon AF-S NIKKOR 14-24mm f/2.8G ED, with the ED standing for ‘extra-low dispersion’ which is another way of saying that it is the top-of-the-line for sharpness and reducing chromatic aberration. As you would expect from a top-of-the-line Nikon lens, this one is fully weather sealed and definitely has that feel the weight, feel the quality aspect being all metal at 969g and feels rock solid being built so well.

The lens has a Nikon F-Bayonet and features an aperture range of f/2.8-f/22. There are 14 elements in the lens, in 11 groups, with nine diaphragm blades. The lens also has two ED glass elements and three aspherical elements, all served up through a AF-S Silent Wave Motor. Focusing can get as close as 10.8 inches, with a switch on the lens to change between auto and manual focusing.

Speed of focusing is always paramount with a lens and the NIKKOR 14-24mm f/2.8G ED does not disappoint, snapping into focus even in low-light conditions. Bokeh is not the usual trait from an ultra wide-angle lens, but it’s there if you need it when the lens is wide open. Vignetting which is usually a factor on wide-angle lenses at large apertures is present on this lens at its widest at 14mm and fully wide-open, but this can be easily corrected in post processing.

When it comes to ghosting and flares, the Nano Crystal and Super Integrated coating does a great job especially in very bright sunlight situations, but you still have to be careful as being so wide-angle can still introduce some ghosting if the light direction is just inside the frame. However, this is only the case if you’re in ultra-bright sunlight. Barrel distortion and chromatic aberration are apparent, but just like vignetting can be got rid of in post processing.

From low light conditions to bright sunlight, the Nikon AF-S NIKKOR 14-24mm f/2.8G ED is a very capable performer, and definitely serves as a great all-rounder if you need an ultra-wide-angle zoom. However, it’s not the only wide-angle available so how does it stack up against other wide-angle lenses in the market?

Close comparisons start with the Nikon AF-S NIKKOR 16-35mm f/4G ED VR. The 14-24mm f/2.8G ED has the slightly wider zoom range and when stopped down is arguable the sharper of the two, especially across the whole frame.

Another strong competitor is the Sigma 14mm f/1.8 DG HSM Art. It may not be fair lining up a prime lens against a zoom, but it will give some idea of how sharp the Nikon is lined up against a prime lens. When the Nikon 14-24mm f/2.8G is stop down to f/5.6 it is at its sharpest, but just not as sharp as the Sigma. Then again, you are getting the convenience of a zoom with the Nikon, just sacrificing a touch of sharpness in the bargain.

Another comparison is the Tamron SP 15-30mm f/2.8 Di VC USD, which is a far newer lens, produces great images and not as pricey. In other words, depending on your budget you do have options when it comes to wide-angle zooms.

The Nikon AF-S NIKKOR 14-24mm f/2.8G ED is definitely a top of the line wide-angle zoom, which produces sharp images with great contrast and color, but it does have some issues. The latest high-resolution cameras will point out some of its deficiencies, such as some focus shift, but it’s learning to live with a lens that when handled right and invariably stopped down will definitely serve you well. It will start to show some deficiencies if you line it up against the latest prime lenses, but it’s still working hard even for a lens released in 2007.

It may have been released a few years ago, but its age is also its benefit as it’s been tried and tested in the field by many professionals, in many different situations and it’s proved its worth. However, like all things, after some time it starts to show its age and a newer alternative that can take advantage of the latest high-resolution camera bodies is definitely needed.

This is why the Tamron SP 15-30mm f/2.8 Di VC USD can be a great alternative and is a newer lens at arguably a better price. However, if you want a complete Nikon workflow from body to lens, the Nikon AF-S NIKKOR 14-24mm f/2.8G ED is still a great performer as long as you can work with some of its deficiencies.

9
Score
The Nikon AF-S NIKKOR 14-24mm f/2.8G ED is a very sharp ultra-wide-angle lens that can be used for a variety of situations. It has been tried and tested in the field and is a solid performer, but there are now equally better competitors on the market.