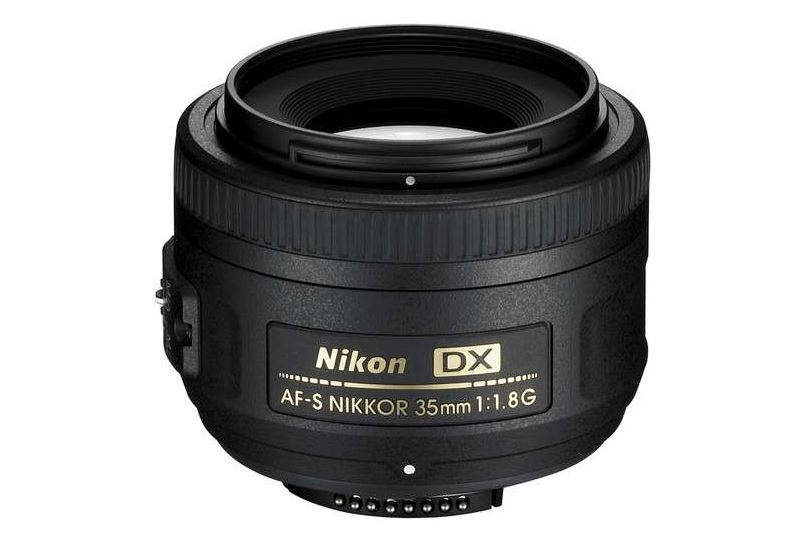 Nikon is widely respected for making outstanding lenses, but in recent years the company has emphasized far more on zoom lens development than prime lenses. That’s why many people were surprised when Nikon introduced their latest lens, the Nikon AF-S DX NIKKOR 35mm f/1.8G.

This high-performance, low-cost lens was developed specifically for the many Nikon D40, D40X, and D60 users who were in need of a fast prime lens at an affordable price. Can the latest Nikon 35mm lens be as good as it sounds? Let’s take a closer look.

Nikon’s announcement was a surprise for the photography world. The Nikon AF-S DX NIKKOR 35mm f/1.8G is an entirely new design for Nikon-mount DSLRs with APS-C sized sensors.

The removal of the in-body focusing motor is what makes the Nikon F mount on the D40, D40X, and D60 different from all other Nikon DSLRs. All “AF-S” lenses are equipped with an exclusive in-lens the Nikon Silent Wave Motor (SWM), which shows that the entry-level D40, D40X, and D60 bodies can only autofocus with AF-S lenses.

The AF-S DX NIKKOR 35mm f/1.8G is a fast-aperture prime, developed to provide DX-format Nikon owners the classic normal angle of view of a 50mm lens on Nikon FX-format DSLRs or 35mm film cameras. That is to say, back in the days of 35mm film cameras many manufacturers added a 50mm lenses as the “kit lens” with your new camera because 50mm was treated as the “normal” focal length (similar to what the human eye perceives).

Today, most DSLRs come with an inexpensive zoom lens as a “kit lens” but many photographers still desire for a “normal” prime lens with a fast aperture. That’s exactly where the new Nikon AF-S DX NIKKOR 35mm f/1.8G makes entry.

The build quality of this compact lens is solid overall and occupies less space in your camera bag than the standard 18-55mm kit lens that introduced with the D40, D40X, and D60. The included lens hood helps shade the front lens element and reduce flare, but given the 1.5x crop factor for DX bodies and lenses, the hood might have been twice as deep (and twice as capable of preventing flare) without damaging the image quality.

Markings such as a distance scale in both meters and feet or basic depth of field scale are completely absent from this lens. One feature that’s worth noticing is that the Nikon AF-S DX NIKKOR 35mm f/1.8G offers fully automatic diaphragm control: you won’t be able to manually select the aperture by turning the diaphragm collar on the lens because diaphragm collar is missing.

Optical construction is all-glass with eight components in six groups, and one aspherical component. The filter diameter is 52mm for this lens which is perfect for Nikon DSLR owners who are using the 18-55mm kit lens as well.

APS-C style sensors in the Nikon “DX” cameras have a crop factor of 1.5x. So, this 35mm lens functions like a 52.5mm lens on DX bodies. The shorter focal length range makes this prime thoroughly perfect as a “normal” lens for common use, and the f/1.8 aperture means that you can produce soft, blurry backgrounds or capture some great images even in near darkness.

The 35mm focal length and f/1.8 aperture are also quite popular among photography enthusiasts who are trying to reproduce the look of old 50mm lenses from the old film days. The minimum focusing distance of only 12 inches means that you can get close to your subject and still get an outstanding shot.

The NIKKOR 35mm f/1.8G is driven by Nikon’s new AF-S in-lens focusing system rather than a typical in-body screw drive focus system. This means focus is quieter and often quicker than the lenses that use in-body focus motors. The new 35mm lens is indeed very quiet, but autofocus speed didn’t quite match with the older NIKKOR lenses on other Nikon bodies. Still, we can say that the AF-S 35mm is quite fast and makes an excellent lens in low light conditions where a standard kit lens won’t be able to get a focus lock.

As mentioned previously, it was somewhat disappointing to know about the absence of distance scale and/or depth of field scale on the side of the lens. It would have been great if Nikon provided a simple distance scale so that photographers have another option to check the focus, but to be honest most people who own Nikon D40, D40X, and D60 cameras aren’t even familiar with the distance scale and would never use it even if this lens had one.

We believe that an average Nikon camera owner can produce great images with this lens – even if he doesn’t know how to post process images.

Even at the widest aperture of f/1.8, the result of the Nikon AF-S DX NIKKOR 35mm f/1.8G was exceptionally sharp from one edge of the frame to the other with very little corner softness. When stopped down to f/2.8 and more, even the extreme corners were noticed to be virtually as tack sharp as the center.

The AF-S DX NIKKOR 35mm f/1.8G delivers the colors that are bright, hue accurate, and nicely saturated. Contrast was generally nice but not as impressive as we have seen from other 35mm lenses such as the Pentax DA 35mm Macro Limited. The glass isn’t much capable of resolving any detail required for high-resolution digital image sensors such as the 10-megapixel image sensors installed in the D40X and D60.

Flare and internal reflections are controlled very well. Color fringe around high contrast lines is also well controlled from f/2 and higher, but wide open at f/1.8 color fringing was often observed on high contrast edge demarcation areas in images. Most prime lenses manage excellent control over barrel or pincushion distortion because they have a fixed focal length. Unfortunately, in the case of Nikon 35mm distortion was visible, with vertical lines “bending” outward.

Vignetting was negligible at all apertures with and without the hood. The seven-bladed diaphragm renders amazing bokeh, and the f/1.8 aperture provides you genuine out-of-focus backgrounds and foregrounds that are perfect for isolating your subject in the frame. Overall, despite the color fringing and the visible distortion, this lens has exceptional optical build quality – particularly considering the price.

Here, we look at the specs of this camera compared to the Sigma 30mm f/1.4 DC HSM Art:

Until someone finds a way to make an inexpensive zoom lens with a maximum aperture of f/1.4, there will always be a place for prime lenses. The ability to isolate an object with shallow depth of field or capture images in extreme low-light conditions makes the Nikon AF-S DX NIKKOR 35mm f/1.8G lens a must-have for serious photography enthusiasts. The 35mm focal length also does well as a general purpose lens, though the noticeable barrel distortion seems to be a little frustrating in a prime lens.

9
Score
The Nikon AF-S DX NIKKOR 35mm f/1.8G is an amazing lens with excellent edge-to-edge sharpness, great bokeh, and a low price. In terms of overall aperture range and sharpness, this lens is superior to several other lenses that cost more than twice as much. Nikon finally produced a fantastic prime lens for average users who own the D40, D40X, or D60. If you have one of these cameras, this lens must be in your camera bag.