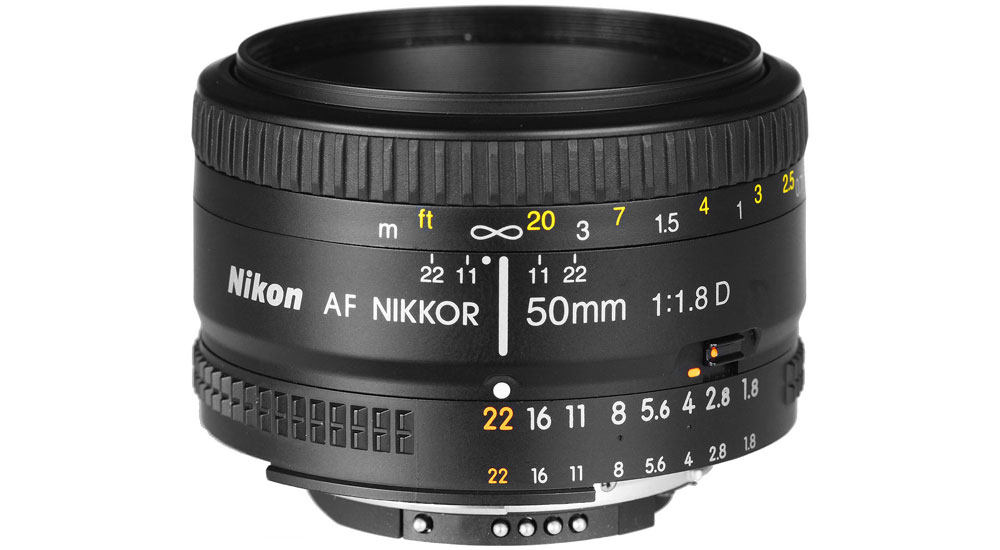 The 50mm is a standard focal length for any type of camera body and as such has been in the lens lineup for Nikon for many years. The 50mm f/1.8 has been around since the mid-1980s and in manual focus form since 1978. As such, the Nikon AF NIKKOR 50mm f/1.8D lens is a very solid performer with many of its idiosyncrasies being ironed out over the years to give a great lens that can work across many applications.

The Nikon AF NIKKOR 50mm f/1.8D has been designed to fit on both a full-frame or crop sensor body – just bear in mind that on an APS-C camera you will be getting a 75mm field of view. Just like the competitors’ start-up, cheaper end of the range 50mm lenses, the lens barrel is made from thick plastic which feels very solid, but clearly not as robust as more expensive variations. This gives the lens a very lightweight feel and comes in at only 156g. Once this lens is on your camera it feels like nothing at all, especially if you’re used to carrying around a top end, heavy zoom or prime lens.

With a tried and tested design that has been around for ages, there are features that just simply work like an aperture ring, with a switch to lock things in place. There’s a good range of features from f/1.8 – f/22 with a lens construction of six elements in five groups and seven diaphragm blades. The closest focus you can have is 1.5 ft/0.46m and magnification ratio of 0.15x. The filter thread is 52mm and can accept a variety of different filter types.

Being old school, you get loads of information on the lens itself, such as a distance scale in both feet and meters, depth of field scale and even an infrared index. The lens has a half inch rubber focus ring, which is very smooth in operation with plenty of travel from its closest point to infinity. As the Nikon AF NIKKOR 50mm f/1.8D is quite short, you don’t want to hold the focus ring while it autofocuses as you will be fighting the gearing. This is just something you will have to get used to. An HR-2 lens hood is available which can be useful in very bright situations for cutting down on lens flare and specular highlights.

Autofocusing on this lens is fast and although it can be noisy, does its job extremely well, especially in low light conditions. The Nikon AF NIKKOR 50mm f/1.8D will struggle working if you get really close to your subject, but it’s not rated as a macro per se, at only 18 inches. If you want to go fully manual focusing, operation is smooth and works very well.

Being able to use an f-number of 1.8 means this lens can work low light, but as you would expect for the price when wide open, you will have to expect a little softness in the images. Images do start to sharpen up past f/2.8, with everything getting sharp from f/5.6 and upwards. Fully stopped down at f/22, the lens is as sharp as you would find it at f/16, with it being optimal at f/8.

Sharpness deficiencies are highlighted the most when using the Nikon AF NIKKOR 50mm f/1.8D on a full-frame body. Once you’re above f/2.8, sharpness dramatically improves and corner softness reduces. After f/2.8, the lens is at the same sharpness levels above if on a crop sensor or full-frame body. The takeaway here is that if you’re happy using f/2.8 or smaller apertures you can get relatively sharp images. Even more so if you’re happy to stick around f/8.

Sharpness is one thing, but having a 50mm lens which can go wide open means that you would like along with sharp images nice bokeh if possible. In this respect, the softness can be seen an ‘artistic’ but focusing on achieving creamy bokeh, the results are relatively pleasing, just don’t expect the same level of quality as you would from the likes of the more expensive 50mm f/1.4.

Being a wide lens and considered a budget model, you would expect artifacts coming into the the Nikon AF NIKKOR 50mm f/1.8D, but it copes better than you would think for the money. Chromatic aberration is slightly present when the lens is wide open at f/1.8 and disappears as you stop down, but you can get rid of this in post-editing.

Vignetting is really only evident at the widest settings with only about half a stop difference from the corners to the center of an image and only a quarter of a stop at smaller apertures. This is more noticeable on a full-frame sensor. Again, you can cure this post-editing, but it’s nice to know that the lens can handle this relatively well. Barrel distortion is basically next-door to nonexistent throughout its range.

Comparable lenses are really down to the higher end of the spectrum from Nikon or a similar lens from Sigma. If you’re going to go through the price range then you could start with the Nikon AF NIKKOR 50mm f/1.4D and Nikon AF-S NIKKOR 50mm f/1.4G. Both go to f/1.4 and are extremely sharp from f/1.8 upwards. But you are paying considerably more for the higher quality.

The Sigma 50mm f/1.4 EX DG HSM could also be an option and although the most expensive of the bunch is also probably the sharpest at f/1.8. This lens also uses a larger filter thread at 77mm.

The Nikon AF-S DX NIKKOR 35mm f/1.8G could also be an alternative for those using a crop sensor which will give you around a 50mm focal length. It’s not completely compatible with FX-sensors, which means you will experience more vignetting, but images will be sharper than the f/1.8D AF.

The lens can be seen as being a little bit soft when it is fully wide open, but if you’re happy to use the lens over f/2.8 then image sharpness dramatically improves. If you forget about bokeh, then you will think you’re using a more expensive lens, especially when you stop down or hit f/8.

The benefit to the Nikon AF NIKKOR 50mm f/1.8D is its price point which means that there is no reason why you cannot have this lens in your camera bag, especially if you want to get some practice with full manual mode. Is also a great way to experiment with a prime lens without breaking the bank.

8
Score
The Nikon AF NIKKOR 50mm f/1.8D is a very budget friendly lens that should be in everybody's kit bag. It may be soft very wide open, but once you stop down you get sharp images that are very pleasing across the range. Light weight and very easy to use.