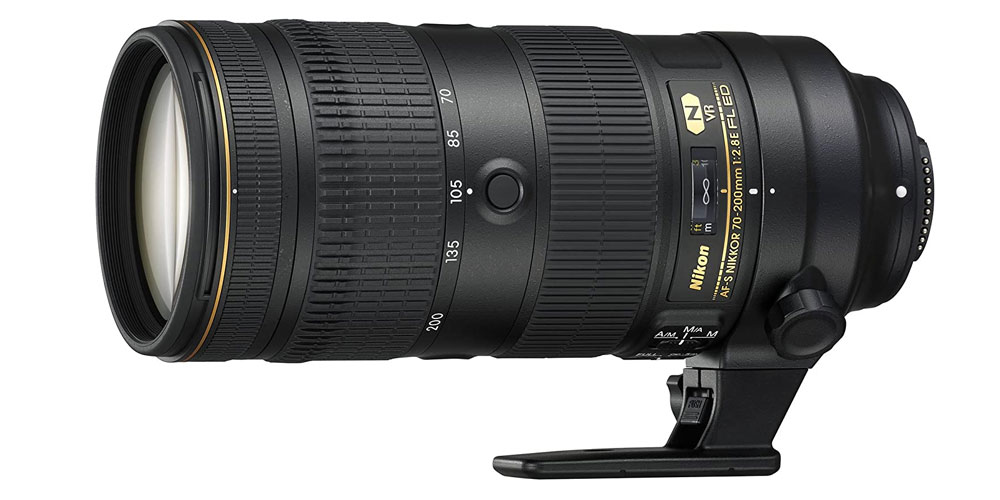 The NIKKOR 70-200mm f/2.8E FL ED VR is praised by professionals and serious hobbyists for its low light performance, fast and responsive auto-focus, excellent image quality, and fantastic bokeh. Compared to kit lens offerings by Nikon, it is much more rugged and robust, also heavier, larger, and quite a bit more expensive.

This lens is in the Nikon F mount, with the additional tabs and electronic contacts for autofocus and lens aperture control with current Nikon digital cameras. It is backward compatible to a point. Older cameras will not be able to use all the features of this lens. Older F mount cameras without the ability to change lens aperture from the camera will not be able to get much use out of this lens at all since it has no aperture ring, no way to manually set f-stop on the lens itself.

An AF motor is built into the NIKKOR 70-200mm f/2.8E FL ED VR, so it is also usable on the current entry-level and consumer-oriented APS-C cameras from Nikon, like the D3500 and D5600. Other fully compatible cameras include the D5, D800 series, D600 series, Df, D750, D500, D7000 series. It is also compatible with the new Z series of full-frame mirrorless cameras with the Nikon Mount Adapter FTZ. Looks like the oldest digital camera that this lens is fully compatible with is the D300 series. It is not backward compatible beyond that nor is it usable on any film cameras.

The built-in AF motor is Nikon’s SWM, Silent Wave Motor. It focuses extremely quickly with almost no noise. Manual focus override is available by simply twisting the separate focus ring to fine tune focus, or switch off the AF either from the camera or on the lens. Having the motor built-in means it is optimized specifically for that lens itself. Focus chatter is virtually eliminated.

This near silent motor is a great asset for anyone shooting video with the newest Nikon digital cameras. Focus noise is almost nonexistent, so it won’t be a distraction during video playback.

There are four AF function buttons. They operate in conjunction with the AF-L switch. AF-L locks auto-focus. Hold a button to recompose or if your target runs behind something. OFF means the four buttons are ignored. AF-ON turns on the AF system as you hold a button.

Close focusing gives higher magnification ratios than previous versions of this zoom due to redesigning the focus and zooming mechanisms.

A tripod collar is permanently attached to the lens, though the foot is removable. The collar rotates freely around the lens, so you can shoot in any position necessary. There are no clicks or stops in the collar rotation.

The Vibration Reduction feature built into the NIKKOR 70-200mm f/2.8E FL ED VR, combined with the fast aperture, makes it the perfect choice for photographers working in challenging and lower light conditions. Up to four stops of handheld ability are added. Wildlife, sports, and wedding photographers will benefit greatly from the opportunities opened up by this feature.

By no means is this a small, light lens. It is significantly larger in both length and circumference, plus it is much heavier than similar focal length lenses such as the 70-200mm f/4.0 or the kit lenses for the APS-C format cameras.

However, the NIKKOR 70-200mm f/2.8E FL ED VR is lighter and shorter in length than earlier versions of the f/2.8 zooms previously offered. This is good news for photographers on the move with their gear, as it lessens the load on their shoulders. It also helps out in being able to shoot at slower shutter speeds because of having less arm fatigue causing tremors during exposure.

Altogether, the fast aperture, lower weight, and exceptional VR result in a lens that can be used in many situations with relative ease. Thus, increasing the likelihood of capturing usable images. Superior images, in fact.

As with other high-end Nikon lenses, the optical performance of the NIKKOR 70-200mm f/2.8E FL ED VR lens is nothing short of spectacular. Wide open, it is very sharp, even the corners of the image don’t suffer as much image degradation as in earlier f/2.8 tele zooms. Stopped down two or three stops, and almost all light fall off or image softness from corners and edges is gone.

With the fluorite lens element, color fringing is reduced as well. You are getting a superior lens for the high price this lens is selling for.

The AF motor, besides being quiet, is also very fast. With the newer Nikon cameras, this lens can capture sharp images of rapidly moving subjects, even if the subject is moving towards or away from the camera, not merely when traveling across the frame.

Being dust and water-resistant (note: not waterproof), the NIKKOR 70-200mm f/2.8E FL ED VR is capable of use in extreme conditions, hot or cold, wet or arid. Its heavy-duty construction can handle hard use from a working pro.

If you are a professional or serious amateur shooting weddings, sports, or wildlife, you will not regret getting the NIKKOR 70-200mm f/2.8E FL ED VR. It is very high priced compared to other offerings, but for those needing the extras that this lens brings, it is worth it.

Any photographer wanting the highest image quality in this focal length range will also be pleased with this lens. It is the newest telephoto zoom part of what many Nikon photographers call the Holy Trinity of full-frame format zoom lenses. The 14-24mm f/2.8, 24-70mm f/2.8, and the 70-200mm f/2.8 make up that group.

8
Score
The NIKKOR 70-200mm f/2.8E FL ED VR lens will be suitable for both professionals and amateur photographers. While it's priced higher than some of its competitors, it's a workhorse that brings the quality performance that Nikon's high-end lenses are known for.