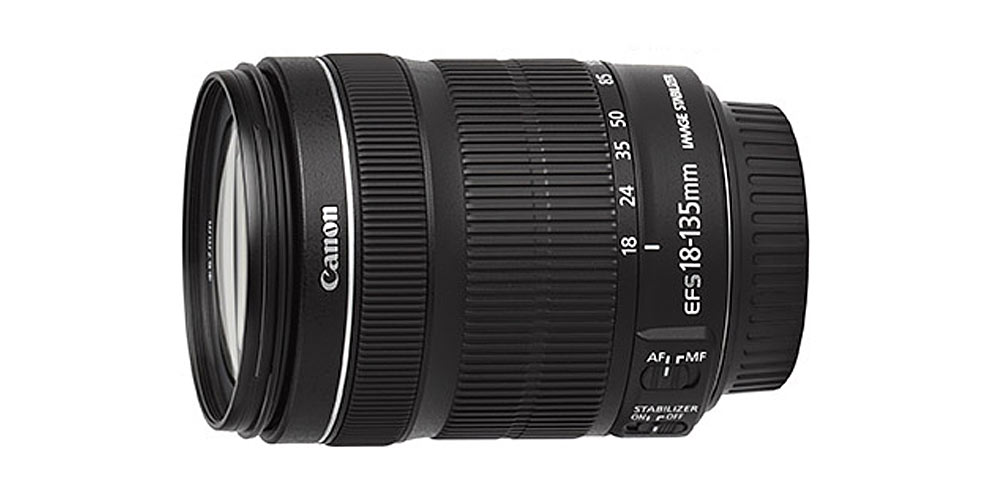 A kit lens is not only a great starter lens, especially when you get one bundled with your camera, but it’s also a great backup lens. The Canon EF-S 18-135mm f/3.5-5.6 IS STM lens is an upgrade from the 18-55mm IS kit lens with a nice wide focal range, lightweight, has Image Stabilization and comes in at a reasonable price.

The lens itself has 16 elements in 12 groups and seven diaphragm blades with a rounded aperture. It has the usual plastic feel associated with kit lenses, but what you lose in metal construction, you gain in weight-saving at only 515g. The filter diameter is 67mm and it comes with an AF/MF switch, image stabilization switch, and a zoom lock switch to lock the zoom ring at 18mm. There’s also the option of a petal design lens hood. Lens focusing is done internally, which means filters do not rotate when focusing.

It’s likely that the Canon EF-S 18-135mm f/3.5-5.6 IS STM will be used mostly on crop sensors/APS-C bodies which will give an equivalent focal length of 28.8-216mm. This gives you a huge focal length range to play and get creative with. Image Stabilization is a great addition here especially when some more expensive lenses don’t have this feature. The rating for the image stabilization is 4 stops, which will allow you to use some quite low shutter speeds, increasing your hit rate.

As the lens is quiet in operation as is the IS due to the Nano USM technology, video operation will result in more professional footage. The IS is also dynamic which means it can be used when moving, a feature which is always on in movie mode.

Other sweet features include auto-panning detection and auto tripod sensing. When using a tripod Canon recommends switching off IS to conserve some battery life and leave on for every other circumstance.

Continuous Movie AF mode benefits from these additions, quiet operation, maybe not as fast as Ring USM, but the silent operation more than makes up for this. Being a video-centric design, other improvements include no focus breathing, with the framing not shifting when changing focus.

The focus ring feels quality, better than on the last model with plenty of rotation located to the rear of the lens. The minimum and maximum focus distances have also been increased.

The lens, on initial impression, produces sharp images in the center, which can show softness in the corners. There’s also evidence of vignetting and some distortion. It’s slightly less than the previous 18-135mm IS lens, but not enough to be a complete step up.

The vignetting has two stops in the corners at its widest focal length, slowly decreasing up to 135mm. However, you can stop down to reduce this effect. Barrel distortion is the same, with a strong pincushion effect at 18mm, reducing up through the focal lengths. Chromatic aberration only starts to creep in at the extremes of the focal lengths, which you can check out in post-production, or just stick to the mid-range here.

The Canon EF-S 18-135mm copes with lens flare quite well, only being apparent when you use f/8 or above. The lens isn’t going to give you superior bokeh, but it can grab some at a stretch.

The general everyday use, especially with a reasonable amount of light, images are crisp, especially when you consider the cost of the lens.

It’s usually the case that if you’re looking at a lens such as this one, you have a budget constraint or want to try out a kit lens before venturing into more expensive optics. The Canon EF-S 18-135mm f/3.5-5.6 IS STM has a reasonable weight, reasonably compact, and considering the features including image stabilization, you get a good deal for your money.

The long focal length and quiet operation will work well for video, the only real downside being the f/3.5-5.6 aperture. Entry-level lenses generally have a larger focal length range than their more expansive counterparts, but this is a good thing as you can experiment with images throughout the range and you will not only get more creative, but also start to focus on the focal ranges which work for you when you eventually upgrade.

Having the option of a kit lens such as this one is a good addition to camara bodies such as the Canon EOS Rebel T4i. You have an overall lightweight package and it feels like you have all the facilities of the more expensive counterparts.

The only real downside of a kit lens like the Canon EF-S 18-135mm f/3.5-5.6 IS STM one is that you may want to upgrade very soon, as is the way of things once you get into this hobby, but considering the price, it’s everything you need at the entry-level. Definitely a recommended lens with a lot of functionality for the money.

9
Score
This is a great kit lens with a very usable focal range. The inclusion of image stabilization makes the Canon EF-S 18-135mm f/3.5-5.6 IS STM a great all-rounder, entry-level zoom with loads of potential.