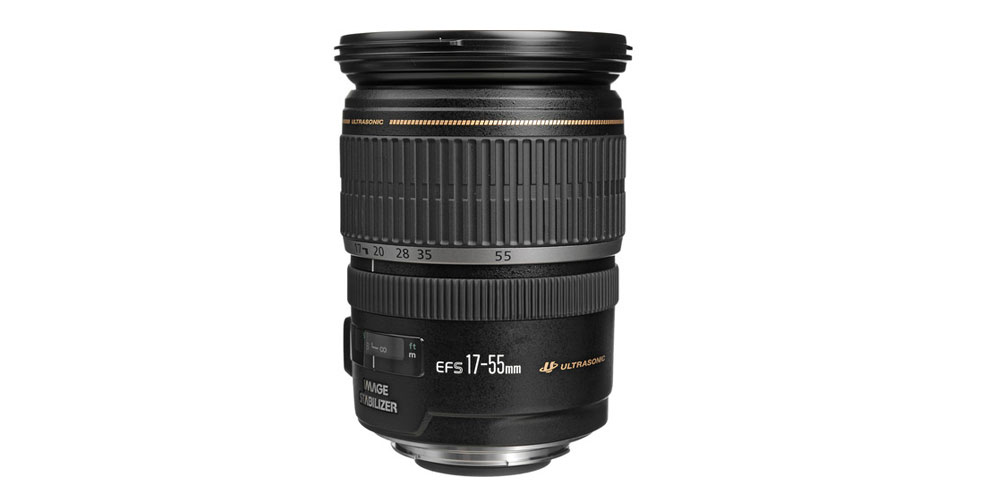 For Canon users who want all the fun of a high spec, wide-angle zoom lens without the high price tag, the Canon EF-S 17-55mm f/2.8 IS USM has been a long-standing first choice. The lens is designed specifically for APS-C-format cameras, offering an equivalent focal length of 27.2-88mm. Also included in the set up is a fast f/2.8 aperture, and while the image stabilization system is from the older generation, it’s still highly capable.

With the Canon EF-S 17-55mm f/2.8 IS USM covering the most useful of focal lengths and with a reasonable price tag, it should act as a great all-rounder for those who want an all-encompassing zoom lens without too much of a weight burden.

Although some have said that the 645g mass of this lens is quite weighty, it still balances very well on most crop sensor cameras such as the Canon Rebel series. In comparison to many L-series zoom lenses, the EF-S 17-55mm is reasonably lightweight.

Speaking of L-series lenses, the EF-S 17-55mm doesn’t have the same level of weatherproofing or build quality, but it is still solid enough for most applications. The lens barrel itself consists of the usual distance scale, along with a narrow focusing ring, and wide zoom ring. Both rings are rubberized and ridged for easy gripping, with a different texture on each ring for easy identification.

As for the optical arrangement, two Ultra-Low Dispersion glass and three aspherical elements have been included, along with a Super Spectra coating to reduce lens anomalies. A ring-type Ultrasonic Motor (USM) covers autofocusing with full-time manual override, and a seven-blade rounded diaphragm provides a shallow depth of field.

Lastly, the EF-S 17-55mm is supplied with its own lens caps but doesn’t come supplied with a lens hood or any type of carrying case. Unfortunately, these last two items will need to be bought separately.

Both the focus and zoom rings on the Canon EF-S 17-55mm f/2.8 IS USM turn extremely smoothly, although the focus ring has no hard stops for setting to infinity. The 77mm filter thread feels very professional in size and doesn’t rotate when focusing, so it can fit a variety of filters.

The USM motor is the tried and tested version from Canon’s higher-end lenses and is extremely quick to lock into focus. There were some instances of focus hunting in very low light conditions, but this was to be expected with this price point of lens. The close focusing distance of 35cm was of great benefit, providing far more scope for creativity than expected with small objects.

This EF-S 17-55mm also copes very well with general lens anomalies. Evidence of chromatic aberration can be seen in small quantities with the aperture at f/2.8, but quickly goes away by stopping down to f/4. Generally, this effect can only be seen on very high contrast areas.

The lens also handles vignetting quite well, with only slight amounts of light falloff in the corners at f/2.8 and at 17mm. Vignetting is much less apparent at 55mm, which is also alleviated by stopping down to f/4.

One of the benefits of an f/2.8 lens is the light gathering abilities and naturally produced bokeh. Background blur will always be a subjective point of any camera lens, but in the case of the EF-S 17-55mm, the seven-blade diaphragm does a reasonable job of producing smooth background blur, with a nice transition of colors. Unless the background is extremely complicated, the lens produces a nice painterly look to most backgrounds.

The image stabilization system works extremely well. It may not have the same range as more contemporary systems, but it still does a very good job of producing a high quantity of keeper images and for gaining lower shutter speeds.

As the Canon EF-S 17-55mm has been around for some time, other makers have had the same idea in this category of lens. The Sigma 18-35mm f/1.8 DC HSM Art is a worthy opponent of the Canon, being roughly in the same price bracket. The Sigma providing an equivalent focal length of 28.8-56mm.

The Sigma has the overall advantage of being a much newer lens, which means it can offer some swankier features for the money. This includes an extremely-wide-for-a-zoom-lens f/1.8 aperture and wonderful optics for the money. The aperture has nine rounded blades and although it isn’t weatherproof, it’s made from rock-solid Thermally Stable Composite (TSC).

Unless you really want the exact focal lengths of the Canon and need image stabilization, I hate to say it but the Sigma is the best choice out of the two considering optics and overall performance. The only real downside to the Sigma which applies to all Art series lenses is that it’s large and heavy, which may be a factor if you want a lightweight solution.

The Canon EF-S 17-55mm f/2.8 IS USM is still one of the fastest standard zoom lenses for crop sensor Canon bodies. The lens is a great performer in low-light conditions and the addition of image stabilization makes this lens even more usable. The autofocus system is very efficient and although it’s not as quiet as an STM motor, it’s respectable enough for most applications.

Image quality is excellent across the focal and aperture range, while also being very good for the price. The image quality may not be up to L-series standards, but when stopped down to f/4, images have plenty of detail with very controlled aspects over chromatic aberration and vignetting.

It’s understandable why this zoom lens has been a favorite for so long and is a great step up from the average kit lens. It may seem initially expensive if you are coming straight from a basic kit lens, but considering its all-round usefulness, the Canon EF-S 17-55mm f/2.8 IS USM is still worth every inch of its asking price.

8
Score
The Canon EF-S 17-55mm f/2.8 IS USM is a good quality zoom lens built specifically for crop sensor camera bodies. It features a wide and fast aperture as well as image stabilization to produce good quality images for the money.