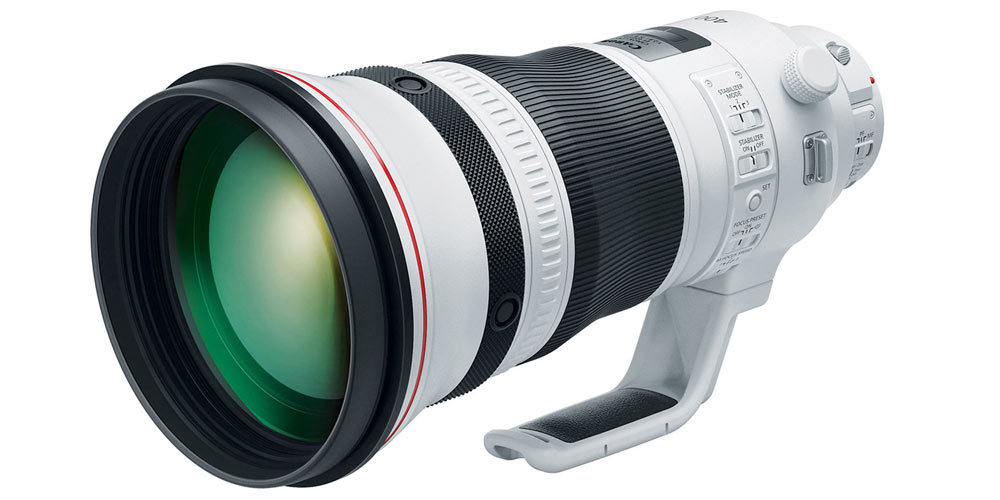 The weight saving is definitely significant, especially since Sony has released its own FE 400mm f/2.8 lightweight version at 6.4 pounds. Canon has also improved the barrel design, improvements to image stabilization and some of the way of the lens shifted to the front for better overall balance.

Opening Up the Back

Optics in the Canon EF 400mm f/2.8L IS III USM consist of 17 elements 13 groups, two fluorite elements, a super UD element that has Canon’s Air Sphere Coating, and Super Spectra Coating. The selling point of weight saving isn’t just there to help your back muscles, but also as a way to reduce heat. The traditional white paint has also been updated to reduce the buildup of heat, especially when used in sunny conditions.

The lens itself is designed for full-frame sensors, with an EF mount and an aperture range of f/2.8 – f/32 through a rounded nine-blade diaphragm. As you’d expect, the lens is fully weather-sealed. There is also a 52mm filter thread which is drop-in, convenient as you can use any 52mm filter for the purpose.

The internals of the lens include updated elements of electronics, which may be a sign of things to come.

The Canon EF 400mm f/2.8L IS III USM’s inner barrel is made of magnesium alloy. There are adjustable elements in two places, with the two-barrel housings being held together with 12 large screws. These are removed revealing in the top the barrel and the IS unit. Rear eccentric collars do the adjusting of the 2cm thick unit which houses electromagnets, springs, and sensor inputs, along with optical elements.

The front end of the lens reveals the USM motor, the same unit as in the RF 50mm f/1.2 lens. Being the same motoring in each lens brings up some theories of why this was done. Clearly from a business point of view, but it may also point to the internal workings of both RF and EF lenses being similar.

This may seem oversimplified as additional electronics and optical tweaks will be needed for each lens in the RF range, but the basic core structure could follow a similar pattern. Digging around some more, the motor and aperture assembly are located here along with focusing position sensors underneath the ring assembly.

Other elements have been improved across the board. The minimum focusing distance is 8.2 feet, better image stabilization, and electronic manual focusing. The optical image stabilization now gives five stops of correction from the previous three and a half. The manual focus now uses the Ultrasonic Motor. The speed of manually focusing can be adjusted with a three position toggle switch on the side of the lens. You can also use two focus presets on the lens.

Initially, it seems that the Canon EF 400mm f/2.8L IS III USM has just been given some weight savings, but there have been improvements across the board. Firstly, the lens elements have been moved to the mount side of the lens. A lighter weight lens, but still built like a tank with loads of screws holding everything together, showing its build quality. something that is very reassuring when you’re paying nearly $12,000 for a lens. There are also optional accessories available to keep its much expensive glass safe. A hard lens case 400E which looks like its own suitcase and the soft lens case LS400.

There were findings that were unexpected, such as the spring-loaded adjustable collar collection. The use of the same USM motor as in other lenses may indicate what Canon will use across its lens range or just in lenses that have a ton of glass. The weight saving may also be helpful if you do want to use one of these lenses on a mirrorless design camera.

The Canon EF 400mm f/2.8L IS III USM is meant to have improved focusing and accuracy and is now 25 percent lighter. This could be enough of a selling point at this end of the market, especially for those where lighter kits are paramount. How this will compare to the Sony FE 400mm f/2.8 GM OSS lens will be very interesting. Canon has always been renowned for its lens quality, with Sony playing catch up, so the comparison will definitely shine the spotlight on both of these lenses, good and bad.

9
Score
The Canon EF 400mm f/2.8L IS III USM is a worthy update of its predecessor with enhanced optics and internals. A 25 percent weight reduction could be enough to entice people to upgrade.