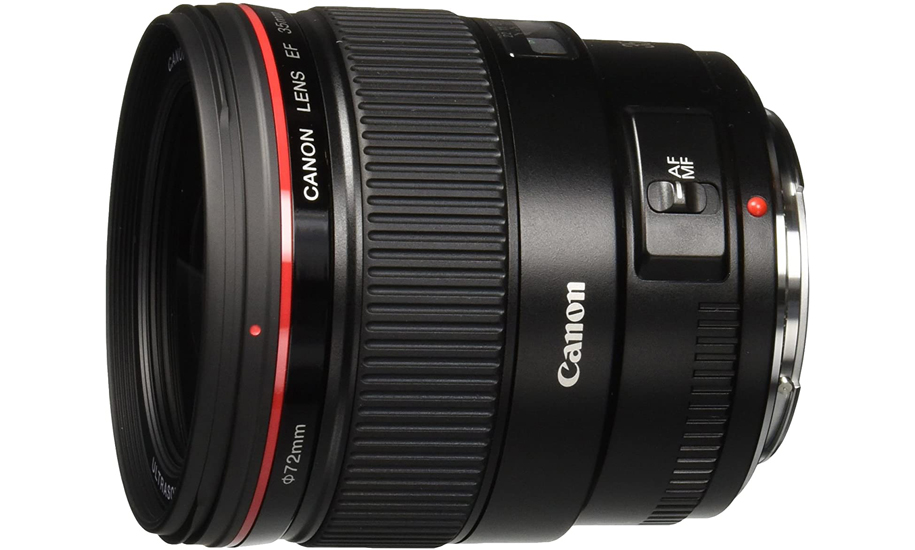 The Canon EF 35mm f/1.4L II USM was launched to replace the rather elderly Mark I version that was first released in 1998.

The EF 35mm Mark II shares a lot of main specs with the Mark I, and key features are very similar. Underneath the surface, though, is where Canon’s quest for excellence is very much in evidence.

The Mark II is bigger, heavier, and harder on your bank account, but is it worth the extra cost? Let’s take a closer look at how this lens performs when in action.

The Canon EF 35mm f/1.4L II USM lens is heavier, but it’s made with more engineered plastic than the metal original. However, it is still a professional-standard lens and is able to put up with a lot of abuse. It is fully weather-sealed which already puts it ahead of the EF 35mm Mark I.

One reason it’s so durable is because the lens core is made of solid metal, with heavy-duty screws, bearings, and rollers, so the plastic exterior isn’t really much of an issue

Canon’s simple and streamlined lens design with one ring and one switch makes the Canon EF 35mm f/1.4L II USM very simple to use.

Most modern lenses are being made smaller and lighter, but Canon chose to make the EF 35mm Mark II bigger and heavier, with the aim being to include top-quality optics and improve the build quality. They certainly achieved that with this lens, and the increase in weight to the original is over half a kilo. When teamed with a heavy full-frame camera, you’ll definitely know you’re carrying it around, but it’s not too much of a burden on long shoots.

Canon provides an EW-77B lens hood with the EF 35mm Mark II, and it features a push-button catch release, which is much better than the the old screw-on version that sometimes came loose and fell off.

You also get a Canon LP1219 Lens Pouch with the Canon EF 35mm f/1.4L II USM lens, which gives dust and abrasion protection but not much in the way of impact protection. You may want to invest in a more heavily-padded lens bag for peace of mind!

As far as optics go, the EF 35mm Mark II lens boasts 14 elements in 11 groups, with two pressed aspheric elements and one UD glass element. There are nine rounded aperture blades compared to the eight-bladed Mark I version.

The EF 35mm Mark II features Sub-Wavelength Coating (SWC) which is similar to the Nano Crystal Coat from Nikon. This is applied to the rear surface of the front aspherical element to effectively deal with ghosting.

This lens stops down to f/22, and it goes up to f/1.4 when wide open. The closest focusing distance is 28cm, which will give you some great close-up shots. It doesn’t have a hard infinity focus stop, which means you have to let the autofocus system focus for you at infinity.

The AF drive on the Canon EF 35mm f/1.4L II USM is the Ultrasonic Motor, and this lens locks on focus impressively fast. You can use manual focus by flipping the AF/MF switch on the lens barrel; however, the AF system is so good you may not need to manually focus very often.

The sharpness on this lens is fantastic, and it’s actually better than the Mark I version at low f-stops. This lens is so sharp it actually stacks up to the ZEISS Otus 55mm f/1.4, and that is one impressive lens.

One of the best things about the Canon EF 35mm f/1.4L II USM is the image quality at the maximum aperture. It remains sharp right across the frame, with no corner softness.

As you work further down the aperture scale, there is some small loss of sharpness, but this is minuscule. The sharpness is at it’s peak from f/1.4 to f/4, but even at f/22, this lens is comparable to other high-performance professional lenses.

Even at wider apertures, chromatic aberration is controlled much better on the EF 35mm Mark II, and it seems like the BR optical coating has much to do with the improvement. Although you can fix a lot of chromatic aberration issues in image editing software, it’s best if you don’t have to do it in the first place!

There are various types of flares that can spoil an image, including colored flare spots, ghosting, and veiling glare. The EF 35mm Mark II performed brilliantly when tackling late afternoon sun, and kept more detail in the brightest areas as well as combating flare spots.

How does it perform in the bokeh department? The Canon EF 35mm f/1.4L II USM gives a superior blur due to the nine rounded aperture blades. This gives cleaner bokeh circles, as well as 18 pointed stars on specular highlights.

Sigma used to be one of those brands that had a reputation for producing cheap, but rather bad lenses. With the revamped Art lens range, they have certainly upped their game.

For starters, although the Canon EF 35mm is built to last, it does have a plastic coating. The Sigma 35mm is made completely of metal, but it doesn’t have any weather-sealing, which is a disappointment.

As far as sharpness goes, the Canon 35mm just edges out the Sigma 35mm, but the bokeh is nearly identical. The biggest difference is the price.

As a top-of-the-range prime lens, the Canon EF 35mm f/1.4L II USM is everything the original version was, and much more besides.

The sharpness is unbeatable, and the special coatings really help when it comes to reducing chromatic aberration and lens flares. This lens performs well at all apertures, and the autofocus is super-quick and accurate.

The only things that let it down are the price, lack of lens stabilization, and the weight. If you want a decent lens that is similar to the Canon EF 35mm f/1.4L II USM , then the Sigma 35mm f/1.4 Art lens is a much cheaper option, as well as being almost as sharp as the Canon offering.

8
Score
The Canon EF 35mm f/1.4L II USM is fast prime lens that is tack-sharp and well-built. The only downside is the price, but you are getting superb quality and handling in exchange.

One Reply to “Canon EF 35mm f/1.4L II USM: This Brilliant Prime Lens Outguns the Others”