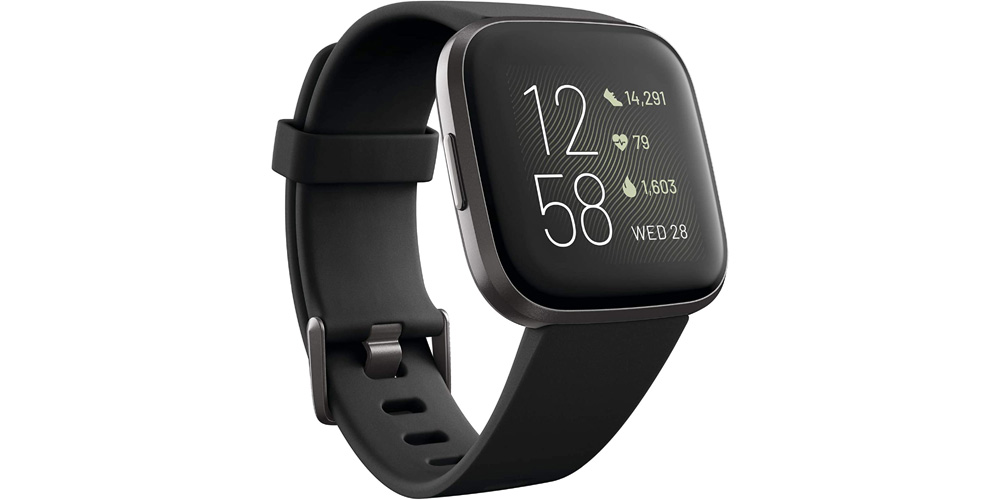 When Fitbit introduced its first smartwatch, the Fitbit Ionic, it struggled to compete against the more powerful Apple and Garmin Watches. But then the Fitbit Versa arrived, and it turned the things around for the company.

With its latest fitness tracker, the company has demonstrated that a superb fitness watch doesn’t necessarily need to be loaded with first-rate features and be expensive enough to burn a hole in your pocket.

While the Fitbit Versa 2 isn’t likely to replace your phone, it has some excellent health tracking features and is accessible to a wide audience.

The Fitbit Versa 2 features a square face design similar to the Apple Watch and looks strikingly like the original Versa at first glance. However, on closer inspection, you will find a few small design tweaks that make the Fitbit Versa 2 incredibly stylish indeed.

The smartwatch, with a waterproof depth of around 12m, is only a little thicker than the Apple Watch Series 3, but it slims down as the chassis narrows towards the heart rate sensor below. With a screen size of 40mm, it would easily fit on most wrists.

From the bottom bezel, Fitbit branding has been removed, making the bezels slightly thinner. While the Older Versa used three buttons on the chassis, the new Versa 2 features only a single button that can perform both ‘select’ and ‘back’ operations.

This indicates you will have to press the button one or two times to access any feature on the smartwatch while other operations can be handled via the touchscreen.

Coming to the display of this second-generation Fitbit smartwatch, it’s is a major improvement over its predecessor. Unlike the older model, the latest Versa takes you into the world of bright and beautiful AMOLED touchscreens, covered under Gorilla Glass 3 protection.

Offering 1,000 nits of brightness and a resolution of 300 x 300 pixels, the Versa 2’s screen is bright and clear enough that you can easily use it in direct sunlight.

Fitbit has also added an always-on feature this time. This is switched off by default and you will have to go into the settings to change it, allowing you to select from several third-party always-on faces, thanks to the new firmware update.

Fitbit Versa 2 in Use

The Fitbit Versa 2 incorporates a new and powerful processor and is faster than its predecessor. This doesn’t mean that the original Versa had any lags or performance issues, but if you have been using it and upgraded to the Versa 2, you will see a clear difference. While navigating through different pages or launching apps, you get a faster response than before.

When talking about the battery capacity, Fitbit claims that the watch can last for five days with standard use, which seems pretty decent. By keeping the screen brightness at the lowest settings, you can prolong the battery life even more.

Swiping right to left will get you access to the app launcher where four app shortcuts can be found on each page. Press and hold to rearrange these to suit your preferences.

Swiping up will give you access to Fitbit Today data that can display up to seven stats including heart rate, steps per hour, total steps, sleep, and food and water consumption. You can customize these options using the smartwatch’s settings app. Swiping down will take you to the notifications and there you can see Quick Settings, Fitbit Pay, and music controls.

A more exciting feature is the Spotify app that comes with the watch, but it only acts as a remote to control the app on your phone. You cannot play Spotify playlists offline; however, the watch has 2.5GB of memory to store your music.

On the downside, GPS is missing and it’s a deal-breaker for many of us. This means you will have to take your smartphone with you every time you go out for a run or bike ride.

As for fitness tracking, Fitbit always includes tons of fitness features in its fitness trackers and the new Versa 2 is no different. Before you start an exercise, just choose an option from the exercise app and the watch will start tracking your activity using its SmartTrack technology.

However, it doesn’t allow you to see real-time stats (exercise duration, distance covered, etc) until it recognizes that you have finished. Also, keep your phone with you so that the watch can access your location information using its GPS.

While you get accurate statistics for some exercises such as swim tracking, the Versa 2 sometimes fails to display accurate results without built-in GPS – the distance covered while running, for instance. However, using GPS the watch can calculate stride length to show you more accurate information.

For sleep tracking, we can comfortably say that the Versa 2 is the best in the business. The sleep score shows you how long you were awake, restlessness, REM, light, and deep sleep periods – it then tells you a number.

For the free version of the app, you can only check your sleep score – subscribe to Fitbit Premium and you will get access to a complete breakdown of the score.

The inclusion of Amazon’s voice assistant means that you can expect more from the Versa 2 than its predecessor, but there are some limitations as it doesn’t correctly recognize the voice commands and still feels far from polished.

How Does the Fitbit Versa 2 Compare?

The Fitbit Versa 2 offers a lot over its predecessor and the company has focused on improving almost every aspect to make it a nearly perfect smartwatch. It features an AMOLED display, a bigger battery, improved fitness tracking capabilities, and more.

The Fitbit Versa 2 is a significant upgrade over the original and is better in every way. A stylish design, larger battery life, numerous health tracking capabilities, and insightful sleep tracking features make it a near-perfect smartwatch. Spotify support is an added bonus but it would be better if we could download our favorite songs like other fitness trackers.

We appreciate the addition of Alexa, but it doesn’t work well. Lack of on-board GPS is another disadvantage.

The Versa 2 is somewhat tricky to recommend as the competitors like the Apple Watch and the Galaxy Watch Active can also be bought for about the same price, and they both offer a GPS support as well.

On the other hand, choosing the Versa 2 over them wouldn’t be a bad decision, either as it offers a huge number of fitness features and a great value for money.

8
Score
The Fitbit Versa 2 is an incredibly stylish and feature-packed smartwatch. Although it’s missing some features, it may prove to be a great asset for people who care about their vitals.