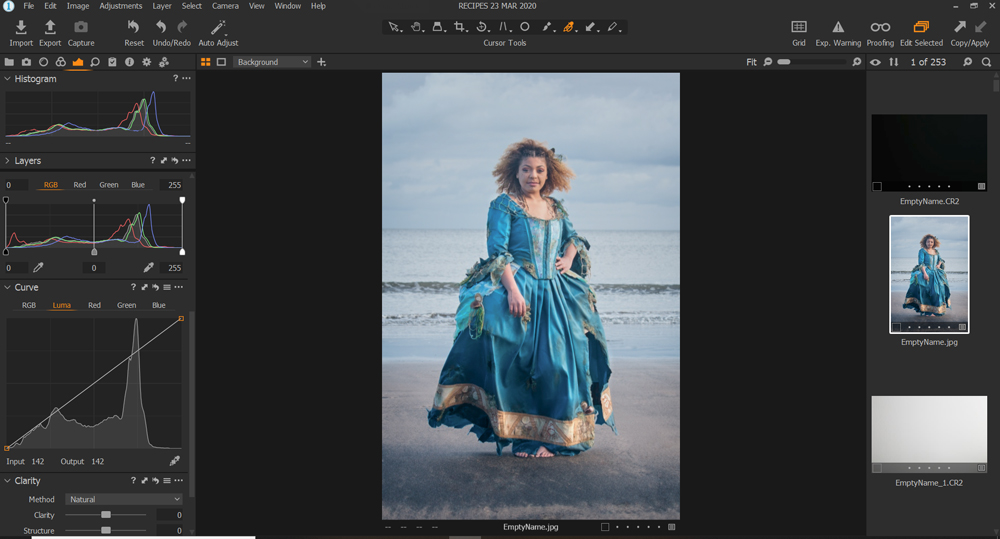 There are many image editing programs out there, but Capture One has always appealed to the professional user for several reasons.

It’s an all-in-one package that offers tethered shooting for image capture, powerful photo organizing, and very detailed image editing. There is nothing quite like Capture One on the market, and even the closest rival, Adobe’s Lightroom Classic doesn’t come anywhere near in terms of the number of editing options you get with Capture One.

As a regular user of Capture One, I know it’s packed with every editing feature you could wish for, but there are some niggles and drawbacks to using it. With that in mind, we’re going to take a good look at everything Capture One has to offer the photographer.

Tethered shooting is one of Capture One’s main selling features for professional photographers, but this image editor offers so much more than image capture and organization.

If I had to list all the features of Capture One, you’d still be reading this hours from now, so I’ll take a look at the basic main features of the software:

This is just a basic list; you’ll find out that there is so much more to delve deeper into once you get used to using Capture One. Phase One has overhauled their software and the naming system, so Capture One 20 is the latest release and follows on from the old Capture One 12.

This is one of the niggles many folk have with Capture One. It’s not the simplest of image editors to navigate. The main problem seems to be that the program is so crammed with features that the developers were really pushed for a way to get them all in!

Those who are used to Lightroom Classic and Luminar may find Capture One’s layout confusing to start with (although with Capture One 20, Phase One has tried to make the interface easier to navigate for beginners).

Capture One doesn’t offer different workspaces for different functions like Lightroom or Luminar does. You do everything in the one interface, so you use the buttons on top of the left-side control panel to switch between modes. These are Library, Capture, Lens, Color, Exposure, Details, Adjustments, Metadata, Output, and Batch.

These control buttons used to just be shown as icons along the top menu bar, which could be confusing if you weren’t sure what the icons represented. This version of Capture One has added text labels beneath the icons to make navigation easier for new users.

Tooltips will also pop up when you hover over individual elements on the interface. These tips tell you what the unlabeled controls actually do, as well as show you an alternative shortcut key so you can access them quicker in future.

The tool stack has been redesigned so that your go-to tool panels can now be pinned to the top of the list, while the others can be scrolled down to.

Along the top of the menu bar, there are toolbar buttons. These are Select, Pan, Loupe, Crop, Straighten, Keystone, Spot Removal, Draw Mask, White Balance, and Apply Adjustment cursors.

Like Lightroom Classic, Capture One stores information for your imports in databases (catalogs). The import window is impressive, as it gives you a whole host of options like source, destination, file renaming, copyright metadata, simultaneous backup during import, and even apply adjustment styles and autocorrect.

RAW import is fast, even when there are a large amount of RAW files to get through, and the quality of the RAW image processing is better compared to Lightroom and even DxO Optics Pro.

Capture One 20 supports Adobe DNG images, and treats them as original RAW files. One welcome adjustment is that this version of Capture One allows Lightroom users to import their Lightroom catalogs into Capture One for seamless switching of editing programs.

Lightroom Classic and Luminar do have the upper hand when it comes to simple photo organization. Capture One has all the usual ratings and color tags you can add via the thumbnails, but it doesn’t have a simple pick or reject option.

One good tool that is similar to Lightroom Classic’s Snapshots feature is called Variants. This lets you create multiple copies of a photo with different edits. Capture One 20 now has a Before/After view tool, but Variants used to be one of the only ways to get a before-and-after view of your adjustments.

Although the organization aspect of Capture One 20 can be a little laborious, the selection of editing and adjusting tools is outstanding.

It has the standard exposure, contrast, shadows, highlights, sharpening, etc., but it goes so much further with most adjustment tools than the rival image editors do.

The High Dynamic Range tool has Highlights, Shadows, and two new tools for Capture One 20 in the form of the Black and White slider to give you better contrast on your images. This tool isn’t a special effects HDR filter but is for correcting and perfecting images.

One niggle for those who like creating true HDR with bracketed images is that there is no tool for that, which there is on Lightroom. There’s also no option for merging panoramas in Capture One either.

There are lens profile tools for correcting distortion, but the selection of lenses isn’t exhaustive. Chromatic aberration correction is included in the lens section, as is purple fringing correction.

The noise-reduction tools are very good in Capture One 20, and it applies a fair amount of noise reduction to your RAW files by default.

The crop tool used to be a pain to use in Capture One, but it’s been improved in this version. Now you just have to hit Enter to get the tool to crop, whereas before you had to play around with Loupe view to actually see what your crop looked like.

Color management is one of the standout features in Capture One, and it offers a far more sophisticated array of tools than any rival software does. You can adjust by color ranges, adjust colors in shadow, midtone and highlight areas, and really fine-tune skin tones how you want them.

In the Color Editor, you have options of Basic, Advanced, and Skin Tone, while in Color Balance you choose from Master, 3-way, Shadow, Midtone, and Highlight.

Capture One 20 offers more color editing options, with eight color ranges instead of six. There is also a Direct Color Editor tool to modify by dragging up and down right over the color you want to change.

There is also the option of the Clone and Heal tool, which work much like Adobe Photoshop‘s similar tools, but although they do a good job, Photoshop has the edge here because of its content-aware tools.

Capture One comes with a very capable photo printing feature that lets you choose a color profile and gives you layout options like the standard contact sheets and A3/A4 formats.

The layouts are customizable, so you can add text and watermarks if you wish, and save your own custom layout templates.

One area in which Capture One 20 is lacking is with online sharing. There are no built-in ways to export to services like Flickr or 500px, although you can create a web contact sheet that makes HTML for a web server.

As mentioned earlier, Capture One is not the easiest image editor for beginners to find their way around in. I’ve been using it for several years and I still sometimes click on the wrong thing or end up where I don’t want to be.

The new version of Capture One has had some minor tweaks to make it more accessible, but it’s still aimed at the power user and serious image retoucher.

The tools are as powerful and high-tech as ever, and for detailed image editing and color grading Capture One 20 is ahead of the competition.

Although there are built-in Styles and Presets in Capture One, you won’t find a huge range, and there are no special effects presets like you can get in Luminar or Lightroom. You can, of course, buy Style Packs from the Capture One website, but they’re not cheap.

Neither is the whole editing program, though. Capture One 20 will set you back from $129-$299, depending on which version you want:

Capture One 20 vs. Lightroom Classic

These two image editors are both similar in terms of what they offer, but there are some differences between the two:

Why would you choose Capture One 20 over Lightroom Classic? It depends what you want it for and how far your budget will stretch. If you need great RAW processing quality, advanced editing options, and tethered shooting, then Capture One 20 is the better choice.

If you are looking for a less expensive (but still great) image editor with plenty of presets and filters, along with social media sharing options, then Lightroom Classic might suit you better.

Should You Purchase Capture One 20?

For many commercial and professional photographers, investing in Capture One is a must. Yes, it’s more expensive than Lightroom and Luminar, but if you are shooting a lot of product, fashion, or food images, the superior tethered image capture coupled with the vast array of editing options and batch editing tools make it worth the price.

The organizational side of photo management isn’t as simple or quick to use as Lightroom or Luminar, but once you are used to the Capture One system it becomes second nature.

Capture One has been industry standard in commercial studios for a long time, and it’s good enough to stay that way for years to come.

9
Score
Powerful and fast image editing software for brilliant control over tethered image capture, editing and retouching. It can be hard for beginners to master, but is well worth learning. The one-off license fee is steep, but it does offer a choice of monthly subscription packages too.