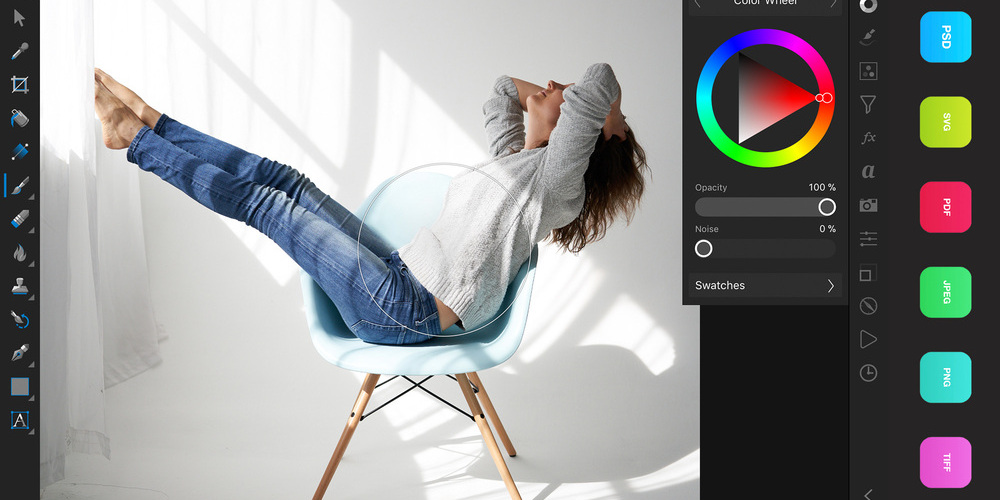 Buyers that want to try Affinity Photo are in for a treat. It’s available on multiple devices, and provides a great all-around user experience.

Originally developed with the Mac in mind, Affinity Photo branched out to become a serious raster graphics editor in a short amount of time. Developer Serif also creates the Affinity Trinity that includes Affinity Designer and Affinity Publisher.

Functionality is great for what it offers, but there are some key things you’ll miss by not going all-in on the Affinity Trinity. Serif apps are a good example of the current software landscape that requires going all-in on a single product line.

Install problems are nonexistent for users on any operating system. The only downside is that smartphone operating systems were not included as part of their rollout plan like Lightroom Mobile. So, if you want to go mobile, laptops and iPads are the only choice.

For macOS users, the install size is fairly small, and only requires 1.34 GB. You will barely notice it on a hard drive, even if it is already packed. For some users, a lot of the photos you’ll deal with will exceed the size of the actual program. With current updates and everything decompressed, it won’t be more than 5 GB.

Affinity Photo can run on 10.15 Catalina for desktops and iOS 12 for iPads. The hardware requirements are generous, with good support for Apple devices made since 2014.

Windows users are in the same boat, and will have a painless install. The only problem users will face is when they’re running specific versions of Windows 7. Although the older OS is fully supported, there are some key differences between the OS requirements for the Microsoft Store version and the Affinity Store Version.

Hardware requirements for the Windows version require a little more beef and may phase out some laptop users running on older GPUs. Laptops or desktops that don’t support DirectX 10 are out of luck unless they have a major update incoming.

The good news is that the ancient Sandy Bridge CPUs support DirectX 10 from their iGPUs. So, unless you’re rocking something with a floppy disk, this requirement shouldn’t be a problem.

The interface does a good job of not hiding important tools behind several menus. It is considered an advanced user interface and does an admirable job of highlighting the pluses of the product.

With the way it was built, Affinity Photo seems like the perfect target for intermediate and professional users. Beginners will need some time to get used to the interface, even if they’re coming from a different advanced photo editing program. It isn’t as simplistic as Skylum Photolemur 3, but it comes close without having a minimalist tag.

And it is the differences that serve as both the strength and the weakness of the product. Affinity Photo’s interface does a good job of making the complex tools recognizable, and never out of the way.

The workspace (personas) are arguably better at handling tasks than competitors and goes through multiple projects without clutter. Understanding how the new workspaces work requires its own tutorial and can be considered an advanced interface element.

Users will often run into this problem when using Affinity Photo interface elements. There are small differences that are easy to understand, and then there are advanced elements that are like night and day. This wouldn’t be a problem if the startup panel linked to basic tutorials. Once you start the program for the first time, it puts you right to work.

Macro support is going to be the star of the show when working with Affinity Photo. It works similarly to actions in Photoshop but is more streamlined.

Despite its simplicity, macros are not limited. You can save multiple steps as a single action and completely change the way you work with multiple projects. This gets rid of a lot of busywork, but also adds an important dimension to the usefulness of workflows.

The normal gadgets, brushes and tools are available. Some are easier to manage than others, and a few may be problematic without updates.

PSD editing support is a nice touch but can be glitchy on some projects. You won’t lose any information, but the results may not be what you expect. This means on some advanced PSD files, something as simple as changing the text can be a pain.

When creating, you have the option of choosing the target device. This is helpful for narrowing down the correct color format, canvas size, or how it will appear on certain resolutions.

The selection tool is no-nonsense and won’t get fussy when you work with sections of an image. HDR and merge options are strong and won’t slow down your device as the image gets bigger. The only thing really missing from the tools are a few advanced text editing options.

Using Affinity Photo is fun, but there are a few sacrifices you have to make. The program forces its proprietary file format called afphoto down your throat. It is one of the more puzzling features of an otherwise solid program. If you want a little diversity with your creation tools, Affinity Photo goes out of its way to make that as hard as possible.

You really start to feel this when hard limitations are placed on editing other file formats. Exporting from within the program messes with layers and colors in a way that will leave you speechless. Sometimes it is perfect, and other times information will get lost in the process. The most common issue is the flattening of an image, which is something that still occurs in the current program version.

Of course, this is less of a problem if you have the Affinity Trinity and work solely in their ecosystem. Take that for what it is, and plan accordingly if you use different photo editing programs. Affinity Photo doesn’t play well with others, and probably never will.

Affinity Photo gets the chef’s kiss for stability across all platforms. There are no memory leaks or issues with heavy RAM usage.

When working with large images the program is rock solid, and since the program never edits the original image, there is never that moment of dread when doing an export. It’s impossible to accidentally overwrite your original photo during the creation process.

Users of the Affinity Trinity will notice the same great programming across all of their products. The stronger your hardware is, the better job it does of utilizing thread counts and GPU power.

Buyers that are on HDDs instead of SSDs can still get by without too much of a hiccup. This is one of the few editing programs on the market that can actually function well on the minimum requirements.

How Does Affinity Photo Compare?

Putting Affinity Photo up against Adobe Photoshop 2020 is both fair and expected. Sure, the latter is more powerful by a mile, but that has nothing to do with the usefulness of Affinity Photo. There are no pro, deluxe, or subscription models to worry about with Affinity Photo. Creators on a budget can get Photoshop quality editing in a small, digestible, low-priced package.

The more time you spend with Affinity Photo, the harder it becomes to switch. It just feels right, but is slightly hampered by its proprietary file format.

Buyers that are doing the full switch from Adobe Photoshop to Affinity Photo will enjoy themselves, especially with Adobe plugin support out of the box. With its low price and great stability, Affinity Photo is a legitimate alternative to the Adobe ecosystem.