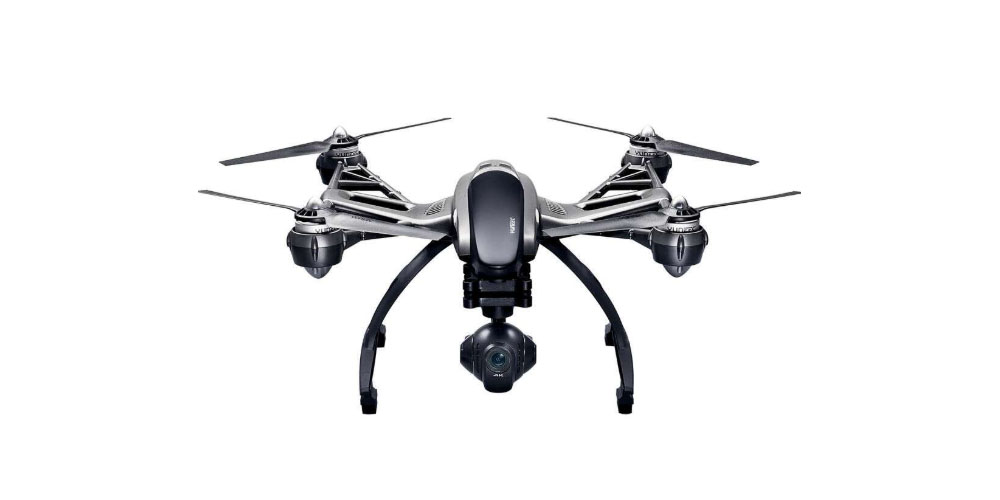 Yuneec has been trying hard to compete with DJI like every other drone company for the past many years, and its lack of popularity doesn’t mean its products have some quality issues. The company has been making RC drones for almost 15 years and gained extensive experience in this area. Currently, they offer some of the most specialized multi-rotor drones on the market.

In 2015, Yuneec released one of the first 4K drones, the Yuneec Typhoon Q500, that aimed to attract beginner pilots. It was loaded with some of the most advanced features that made it easy to fly and capture 4K aerial videos. So, let’s take a closer look at those smart features that this drone carries and how they make it an “easy-to-fly” drone.

The Yuneec Typhoon Q500 is roughly 16.5 inches in length and stands almost eight inches tall. It weighs around four pounds if both battery and payload are attached. You will get a complete package with the drone which includes all necessary plug-ins and adapters, two sets of propellers, a 16GB SD card containing some video tutorials, the ST10+ Personal Ground Station controller, and a built-in camera capable of shooting 4K video.

Amateur photographers won’t find it hard to capture desired results with this easy to use, yet sophisticated drone. It gives them the ability to produce professional-quality images and videos. The drone features a fully controllable three-axis gimbal camera that can capture the horizon straight ahead. It can also rotate down 90 degrees to shoot overhead footage. Although many drones today come loaded with this feature, it’s still relatively new and helps the Typhoon rise above its competition.

Yuneec’s Typhoon packs two unique beginner friendly autonomous modes – Follow Me mode and Watch Me mode. In Follow Me mode, the drone is restricted to follow the pilot, enabling it to fly completely on its own. In Watch Me mode, the drone points the camera on the pilot and continuously keeps him in the frame no matter which direction the drone flies. With the addition of these two features, Yuneec has made life easier for amateur pilots.

The ST10+ Personal Ground Station controller for the Q500 incorporates all the necessary options needed to operate the drone. The controller has a crystal clear 5.5-inch color touchscreen which provides a clear view ahead of the drone when it flies. You can also check other important information on the screen like drone’s battery life, ground speed, altitude, distance from the controller, GPS status, etc.

The structure of the Yuneec Typhoon Q500 is built with mostly plastic unlike some of its expensive rivals. This means that serious collisions for this drone may not end up well but it can still be a perfect choice for those who are looking to buy a great drone with a tight budget.

The 3-axis gimbal-mounted camera sits directly underneath the drone and four rotors dominate its top half. On the rear of the drone, a section is loaded with batteries. Two skids are attached at the bottom of the legs and four soft foam pads fixed on either end of the legs to ensure a comfortable landing. There are five lights on the drone; one is on the rear to distinguish between front and back and one light is under each of the rotors.

This Yuneec drone is powered by a 5,400 mAh lithium-polymer battery, which grants it 25 minutes of flying time on a single charge, if you let the drone hover in just one position. This figure is reduced to 20 or 21 minutes when moving the drone around and shooting video. Furthermore, the battery also lasts for around 20 minutes when flying consistently in Follow Me or Watch Me mode.

Yuneec Typhoon Q500 in Use

Yuneec Typhoon Q500 shines bright when it comes to flight performance. Not only do its smart flight modes ensure simple flight, but the controller is also easy to handle. Using the joysticks with free-flying Angle mode feels incredibly natural and it makes the pilots with no prior flying experience feel like they have been in the business for long.

After pushing the left stick the drone takes only a couple of seconds to take off and it keeps ascending straight up until you release the stick. Once you completely release controls, it hovers in place with the help of its GPS system which also ensures stable flight in windy conditions. With the right joystick, the Typhoon goes up or down and turns left or right.

As mentioned earlier, both smart modes are perfectly suitable for amateur operators. In Follow Me mode the drone does well and follows the operator even if he is 20 to 25 feet away. Watch Me mode is even better as no matter what direction you fly the drone, the camera remains fixated on you. These smart modes can help you capture some amazing shots without focusing on the drone’s flying part.

As claimed by the company the Yuneec Typhoon Q500 can reach a speed of 17 mph in Angle mode. In Follow Me or Watch Me mode, it will go up to 22 mph.

The Typhoon is undoubtedly loaded with impressive features and all of them do a fantastic job, but when Return Home mode is activated, the drone struggles to comply with the given command.

How Does the Yuneec Typhoon Q500 Compare?

Yuneec Typhoon Q500 is a capable drone and can be compared with a professional-grade aerial photography drone like the DJI Phantom 4. There are many reasons to choose the Q500 over Phantom 4 and the most important of them is the gimbal that can be removed and attached to the handle if you want to use it on the ground.

Yuneec Typhoon Q500 is undoubtedly an impressive quadcopter. It has almost everything one should look for in a drone. It gives you an incredible flying experience with its smart and beginner-friendly flight modes and an intuitive control scheme.

The drone features one of the best built-in cameras that delivers professional quality photos and videos – something we have never seen on a similar aircraft. Perhaps, the only thing where the company should have focused more is its flight time. A 20-minute battery life is not enough for an amazing drone like this.

9
Score
If you’re looking for a drone that can capture professional-grade aerial shots without the professional price tag, the Yuneec Typhoon Q500 should definitely be on your list. Its simple controls enable the operator to focus more on shooting video and less on flying the drone.