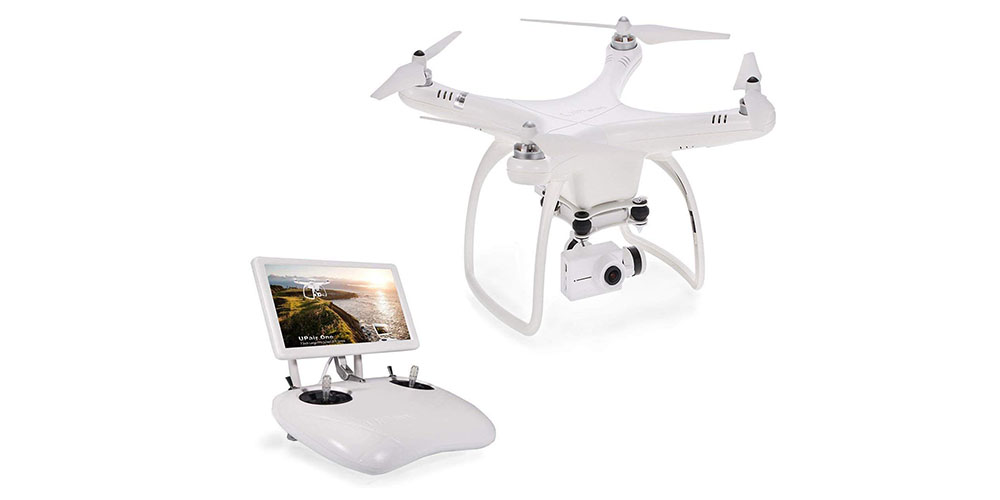 The UPair One Quadcopter is an ideal option for experienced drone pilots who want a high-quality camera drone at a good price. Those who purchase this wonderful quality camera drone will find themselves more than pleased with the design, usability, and features that set it apart from similarly priced competitor camera drones.

The UPair One Quadcopter is designed with the utmost quality and focus on its camera recording abilities. It comes with a multitude of features like follow me mode, programmable flight plans, headless mode, real-time video transmission to a smartphone, and photo transfer capabilities. All these features are combined in a lightweight quadcopter that is only 2.98lbs.

Additional features that the UPair One Quadcopter comes with include a GPS homing feature for safe return if the battery is below the emergency threshold and for simple one-touch returns to end the flight.

With a maximum flight distance range of 1km, pilots are sure to take advantage of the GPS homing as they can get up to some serious distances with the long flight time allowed by the large battery.

The UPair One Quadcopter can fly for up to 19 minutes through its 5400mAh battery. However, despite the maximum flight distance of 1km or 3,280ft, the live video broadcast range is shorter and limited to a max distance of 2,624ft.

One of the best features on the UPair One drone is the controller that allows for live video broadcasts to a smartphone. The live broadcast transmission technology utilizes a 5.8G FPV Wi-Fi signal through the proprietary UPair app on Android or iOS. Pilots of this quadcopter drone simply have to use the app to take photos or videos that are immediately saved to the smartphone’s gallery or camera roll.

The camera installed within the quadcopter drone has a 110° wide-angle lens with a maximum recording quality of 2.7K. This drone is also equipped with LED lights as well as an LED indicator on the controller for the occasional night flight.

The UPair One Quadcopter in Use

Stabilization from a total of four-axis provides for the easy ability to capture clear images with the quadcopter drone despite a lack of experience with this particular drone, or drones in general.

New drone pilots won’t have to worry about any lost drones or range issues with the UPair One Quadcopter as it has the ability to return to a set GPS home location. If a low battery issue is present, the drone will automatically return to its set GPS home. There is also the ability to wrap up the flight with an easy one-press return to the GPS home button on the controller itself.

Headless mode is also an option for beginner drone pilots who may not want to deal with a specified front end as they start to learn flights with this drone. A mode that an experienced pilot would enjoy, and a beginner could find themselves off to a much easier start with, is follow me mode.

Follow me mode, which is possible through the GPS signal in a smartphone, allows for owners to be followed by the quadcopter drone and recorded or photographed in the process of running, biking, and even peaceful shots at a leisurely pace.

It won’t take more than a few flights for any user to get the hang of the UPair One drone as its large battery provides for extremely long flight time. A near 20 minute flight time is able with a single charge of the quadcopter drone. A heavy-duty charger is included with the battery to provide quick charge times.

In mid-flight, the drone can perform tricks, if flown at the hand of an experienced pilot. Those who aren’t experienced with drones may want to keep this camera drone just as a high-quality cinematic video recorder and photo taker, rather than a drone that does tricks like flips or rolls.

Lastly, another feature designed into this quadcopter drone that pilots will want to take advantage of is the altitude hold mode. This mode would allow for even the freshest of beginner drone pilots to hold a set and specific altitude to take photos or high-quality video. The drone can be turned as it holds the set altitude for a full 360° video or multiple photos that can be stitched into one photo through post-process editing.

A pilot of this drone will not find themselves with the feel of devastation in their gut that came from the sight of a broken propeller blade after a sudden gust of wind took it against a surface too hard. Lesser-known drone models wouldn’t fare with the same rugged durability as they consist of cheaper plastics for the body, propeller blades, and propeller guard.

The cost difference between the Upair One Quadcopter and competitors, such as the Potensic T25, may be a point of contention for those looking for a less expensive drone. However, as is the case with anything on the cheaper end, quality construction and components are sacrificed to save on production costs.

If a significantly cheaper camera drone is the intended goal, the Syma X5C may be the go-to camera drone to purchase. It’s also a possible option for a beginner drone pilot to make a camera drone from a regular drone instead. In this comparison, we’ll look at the two more similarly comparable drones, the UPair One Quadcopter and the Potensic T25.

The UPair One has a similar list of pre-programmed flight modes along with the Potensic T25. GPS follow me mode, headless, altitude hold, and return to home are all shared flight modes between the two drones. Potensic’s T25 does have a one-up on the UPair One with a one-button takeoff and land flight mode.

Quality in flight distance, video, photo, and the battery is where the Upair One beats the Potensic T25 hands down. There’s no question that the 1080p on the Potensic T25 does not match the UPair One’s incredible level of the pixel density of 2.7K. Also, the UPair One has a longer flight time by almost five whole minutes with a battery that is more than five times larger.

In conclusion, the UPair One Quadcopter is one of the best-priced camera drones for an experienced and serious drone pilot or one who aspires to break into drone cinematography. The drone has a safety feature for beginners like an emergency return to home mode when a maximum distance has been reached or a low battery has been detected.

This quadcopter is one that any pilot, regardless of experience level, can achieve beautiful photos and videos through its high-quality 2.7K camera. Those who purchase this drone will feel the cinematic power in their hands for almost 20 minutes as the flight time on a single UPair One Quadcopter is massive.

With nothing to fear using this drone’s return to home flight mode, this quadcopter is the best bet to take the next high-quality shot of the neighborhood, a family photo, or even a cinematic shot to add to a video or short film. This high-quality camera comes with the highest of recommendations as the perfect cinematic drone for experienced or beginner drone pilots.

8
Score
The UPair One Quadcopter has a bunch of flight modes that allow users to experience a wide range of usability. GPS return to home mode provides for an emergency backup when a low battery is present or for an easy way to pack up and end the flight. UPair One's HD 2.7K quality camera makes it no joke when one wants to capture serious quality photos and videos.