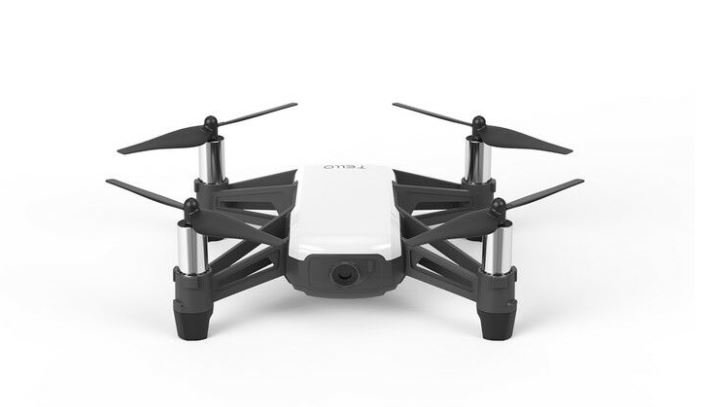 It’s fun to fly drones and generally they aren’t educational, but the Ryze Tello is designed to be both. It allows you to fly the drone with an app or a Bluetooth remote. This drone is also programmable using Scratch, which is an open-source programming language developed at MIT. You can simply write the programs by dragging and dropping blocks of code using this powerful programming tool. Flying the drone is simple and enjoyable as well, but unfortunately, the programming approach seems to be an afterthought.

The Tello is a small drone; it weighs less than three ounces, so it does not need FAA registration. Most of the weight comes from the battery, which is covered in a plastic body of the drone, with the rotors around it. These rotors are protected by prop guards used to ensure the safety of the fast-spinning blades in case of collisions. However, the blades aren’t completely covered, so the Ryze Tello should only be used by those who are old enough to know where their fingers shouldn’t go.

There are three ways to control the Ryze Tello: through a remote control, an app or through the Scratch programming interface. The Tello app can be downloaded free for both iOS and Android devices. This offers a touch-screen interface to control the drone and a preview of the image from the camera as well. It’s a simple and user friendly program that provides a good level of control for both beginners and experienced drone pilots. Photos and video are stored through this app: there isn’t any storage in the drone itself.

You can also control the drone with the optional Gamesir T1s game controller. First, you need to connect it with the smartphone, which then starts sending the commands to the drone. Two analog joysticks on the front of the controller should provide a good degree of fine control over the drone and gamers will feel at home with these.

Taking into account the size of the Tello, the speed of the drone is surprising. It’s fast and maneuverable. In fast flight mode, it can go up to 20mph, and stop and turn in about six feet. The slower speed mode limits the drone to a more manageable 8mph, and you should keep it in that mode until you get used to it.

Taking off is not difficult. After putting the drone on a flat surface, just press the take-off button and slide the on-screen confirmation. The drone will start the motors, take off and hover about five feet above the ground. You can also activate the “Throw & Go” mode. Here, you simply activate the mode and then throw the drone into the air, where it will start the motors and hover in place. You need to be careful, though: as you activate this mode, the motors will start rotating fast enough to cause a nasty bruise on your fingers that get in the way.

From the app, you can use several fun flight modes like, 8D flips, 360, Circle, Up & Away and Bounce Mode. The 8D flips mode is an acrobatic mode, where the drone flips in one of eight directions after you slide the on-screen control. The 360 mode captures video while the drone slowly rotates in place, and Circle records a short video as the drone moves around the subject, keeping the camera pointing at it.

In Up & Away mode the drone flies up and away from you while recording your video. Bounce Mode seems a bit strange: the drone bounces up and down between two to six feet above the ground as you move it around. It’s great for entertaining small children or annoying small dogs, but you can’t get something out of it.

There is no GPS installed on this drone, so you won’t be able to program a course and set the drone to follow it through the smartphone app. If the drone flies out of WiFi range, you will get a warning in the smartphone app, but it will not stop automatically, or return to you. It will hover in place until the signal is reacquired.

The Ryze Tello captures stills at 5MP (2592 x 1936) and records video at a resolution of 1280 x 720. Results are sharp and clean, with good levels of detail and bright, natural colors.

The 1100 mAh battery powers the Tello and provides about three to five minutes of flight time. So, battery life isn’t long. It’s about half of the Parrot Mambo — particularly if you are using the programmable features of the drone, as it should take longer than that to get up and running.

Additionally, the drone has an annoying response of turning itself off after about 30 seconds if it is unable to detect a Wi-Fi connection.

Spare batteries are easily available with the cost of $18 each. You can also get an optional charger for $24 that can charge four batteries at once. Other spare parts are widely available, such as, a spare set of rotor blades for $2 and different colored shells for $8. One set of spare rotor blades is provided with the drone itself.

The Ryze Tello is fun to fly. It has responsive controls that work for beginners and experienced pilots. The App is simple to use, it records nice (if somewhat jerky) video and captures great stills. But if you are planning to get it as a fun way to learn programming, then it’s not an option for you. The Scratch support is very limited and poorly documented.

In this price range, the Parrot Mambo is more preferable option, which is equally enjoyable to fly. It offers more programming options, and lasts longer on a charge. The base model costs just $60, but you will be able to configure it with multiple accessories, such as first-person goggles and a 720p camera. On the other hand, if you’re looking for an entry-level drone, the Ryze Tello is a pretty good option.

7
Score
The Ryze Tello is a fun, simple drone to fly and comes in at a very reasonable price point, but its programming features are poorly executed, and its battery life is too short. Depending on how you plan to use a drone, there may be better options.