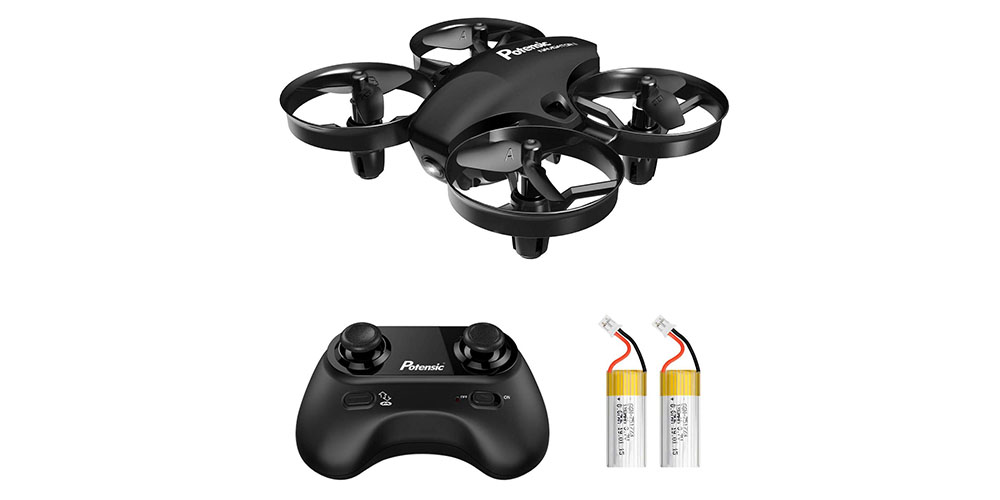 The Potensic A20 Mini Drone is one of the best drones out there for kids as it has the speed and modes to entertain for hours on end.

The A20 Mini Drone by Potensic has a wide range of flight modes. Flight modes pre-installed with this mini drone include one-key takeoff and landing, altitude hold, headless mode, and emergency stop. The additional battery included with a base order of the Potensic A20 Mini Drone ensures that the fun doesn’t have to stop when the first battery runs out.

Designed with young users in mind, the Potensic A20 Mini Drone has a rugged and durable outer layer to protect against impacts and collisions against objects. Built-in propeller guards provide a wonderful safety net against damage such as nicks or full cracks to the drone’s propellers.

This drone utilizes and comes with two lithium batteries that each provide a flight time of five to six minutes. The battery slot is designed as a safe battery slot for kids especially. The batteries take 35 to 40 minutes each to reach a full charge.

The Potensic A20 Mini Drone only weighs an insignificant 6.7 ounces with the battery included. Measurements of the drone come in at a minuscule measurement of 3.5 x 3.1 x 1.25 inches.

This small drone comes with one of the benefits that are shared with other micro drones – no Federal Aviation Administration (FAA) registration is required. Drones that are over a certain weight and size are required to be registered with the FAA. This micro drone is simply just that, too micro to be required to register.

The Potensic A20 Mini Drone in Use

Flight modes featured within the Potensic A20 Mini Drone include headless mode, takeoff and landing with only one button, three different speed options, altitude hold, and an emergency stop mode.

There is also a low voltage alarm that emanates from the drone to alert that the battery has reached near depletion level and should be flown back as soon as possible. All of these modes are found in similar beginner drones that are in the same price range.

The three-speed modes with the A20 Micro Drone provide for ease in use with a pilot, like a child, who isn’t as experienced with piloting a quadcopter. As soon as they get used to the drone, they can turn up the speed to full throttle for maximum enjoyment.

Altitude hold mode is another feature that allows for a child or beginner to get accustomed to the drone and not worry about maintaining its altitude. In altitude hold mode, the drone is simply locked at the desired height and can be flown continually at that level and even kept in a hover at the same altitude.

Headless mode is just another one of the features on the list for this drone that further adds to its ease of use. When a drone is in headless mode, there is no need to remember what end is the front and it can be flown with more freedom.

An additional battery is provided with the Potensic A20 Micro Drone that expands the flight time with another five to six minutes. This additional battery is perfect for kids who can’t get enough of the drone in flight and want to do a quick swap. The battery port, designed for kids, allows for them to swap batteries and start the charge on the depleted battery as they continue to fly the micro drone.

Lastly, the Potensic A20 Micro Drone has an emergency stop feature to prevent potential damage or loss of drone to the wind. The emergency stop can be activated at a moment’s notice. It will shut the entire drone off, and allow it to drop safely onto the ground without worry of it being lost to the wind.

Apart from other competitor beginner or kid drones that are similarly priced, this micro drone does not have any pre-programmed tricks. If a beginner drone for kids that includes tricks, such as flips or rolls, is desired, the Syma X5C might be the option to go with. Another similar drone with pre-programmed tricks, the DROCON Hacker Drone, comes with two pre-programmed mid-flight trick options, rolls and flips, and three-speed settings.

Potensic’s A20 Micro Drone is the drone to go for if hours of entertainment for a beginner or child is the intended goal of the drone purchase. Apart from competitors, this micro drone does not have tricks, however, with more practice, it is always possible to perform manual maneuvers.

The Syma X5C is a similar drone, apart from its built-in 2MP HD camera, as it is intended for children or inexperienced drone pilots. Don’t discount the Potensic A20 Micro Drone though, as it has more features than the Syma X5C does.

The A20 has more flight modes, such as the ability to hold altitude, while the Syma X5C only has a high and low-speed variable option. The micro-drone also wins and beats the Syma X5C with five more minutes of flight time with its dual batteries and about 25 minutes less charge time.

In conclusion, the Potensic A20 Micro Drone is the micro drone to go for a child or beginner. It would make a great stocking stuffer and is sure to bring a huge smile to whomever it is gifted to.

7
Score
The Potensic A20 Mini Drone has the ability to delight any beginner drone user or child who it is gifted to. This mini drone is durable and comes with an assortment of flight modes. Three-speed options, multiple batteries included, and a simple one-button take-off or landing are just some of the features that the Potensic Mini Drone has.