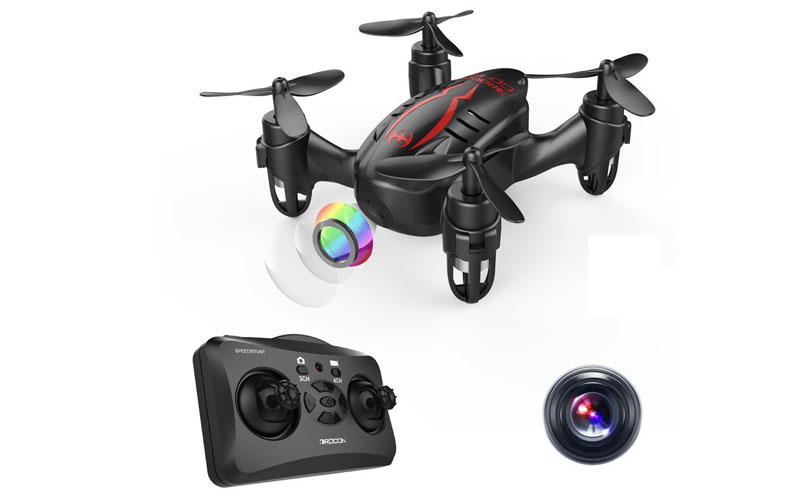 The DROCON Hacker Drone comes with a multitude of features that allows it to take the title of the best choice for beginner drone pilots and kids. Not only is this drone effectively priced to beat competitors, but it also has several features that place it above the pack.

DROCON took out all the stops with the design of their Hacker Drone. They’ve included the best pre-programmable tricks like flips and rolls as well as a headless mode.

The DROCON Hacker Drone comes with three variable speed options and a 720p HD Camera. DROCON also included a 12-month warranty on quality issues associated with the drone that can easily be filled out on the DROCON company website.

The DROCON Hacker Drone is designed with high-quality nylon material. Durability is assured as the nylon material body provides for an increased safety factor through the impact resistance of nylon. DROCON is so sure of its nylon material design for the drone that it doesn’t even feel that there is a need to include propeller guards.

Within the DROCON Hacker Drone, there is a 3.7V 140mAh Li-Po battery that provides for about 6-7 minutes of flight time. The 3.7V Li-Po battery only needs about 30 minutes to reach full charge capacity.

The drone only weighs a total of 19g with the battery included. Measurements of DROCON’s drone come in at a very tiny, and almost unnoticeable, measurement of 74x74x24mm.

Components that come with each purchase of this drone include the drone itself, a controller, a USB charger, four extra drone propeller blades, and an instruction manual. This drone, as recommended by DROCON, does not come with propeller guards as it is felt as not necessary by the company due to its durable nylon material consistency.

DROCON Hacker Drone in Use

DROCON hit it big when they incorporated all the elements that encompass the DROCON Hacker Drone into one of the best possible starter drones. They stopped at nothing to provide one of the best all-in-one drone experiences that rivals similar beginner drones. The Hacker drone includes a majority of all the programmable tricks that competitor drones have, along with a 720p HD camera that similarly priced drones do not have.

The 720p HD camera built into the DROCON Hacker Drone is one of its biggest features that places it above the mark when compared to similarly priced drone competitors. It’s also worth mentioning that a majority of DROCON’s drone rivals in the same price range won’t have a camera and will feature even less pre-programmed tricks.

The DROCON Hacker Drone’s 720p HD camera allows for its experienced pilots and even beginners to capture wonderful photography shots and crisp video in mid-flight. All you need to start video and photo capture is a simple microSD card inserted into the microSD port.

The camera within the DROCON Hacker Drone comes with the option to reduce the quality to 480p from 720p to increase the number of photos and videos stored on the micro-SD card.

This reduction in photo and video quality would not be the choice for quality hounds. However, if you want to focus primarily on a drone with an extremely high-quality camera, you’d be better off with a dedicated camera drone.

The DROCON Hacker Drone’s headless mode allows for the orientation of the drone to remain the same and eliminate the need to constantly identify which end of the drone is, in fact, its head. Headless mode provides an easier drone piloting experience to beginners.

Flips and rolls with the DROCON’s Hacker are as simple as a button press and hold on the drone’s controller with its right stick held in the desired direction. The Hacker Drone will then automatically perform a roll or flip in the chosen direction.

The three speed settings allow for a beginner user to start learning the ropes on slow or low and work their way up to medium, then zip around in high speed. It’s recommended by DROCON to try different speeds mid-flight to have a bit more fun with the drone.

The DROCON Hacker Drone is easily the best choice to go with when compared to other camera drones in its price range. As mentioned before, the Hacker Drone comes with a camera, while competitors of the same price will not feature a camera and continue to come with even fewer features like pre-programmed tricks.

The Syma X11 RC Quadcopter is a comparable drone that beats the DROCON’s drone in flight time, but that is only when the bigger battery upgrade is purchased. In every other category, the DROCON Hacker Drone comes out on top. Not only does it come out on top against the Syma, but it also comes out on top of all similarly priced competitor drones.

In conclusion, the DROCON Hacker Drone is the best purchase a beginner or experienced drone pilot can make. This drone has all the features one could ask for in a drone with its 720p HD camera, roll and flip trick buttons, headless mode, and durable, impact-resistant nylon material construction.

7
Score
The DROCON Hacker Drone is one of the best beginner drones out there for kids and starter pilots who want to pick up the hobby of drone flying. It comes equipped with a 720p HD camera and pre-programmed tricks like flips and rolls. Its durable nylon material ensures it can withstand some of the harshest impacts it could face with routine use.