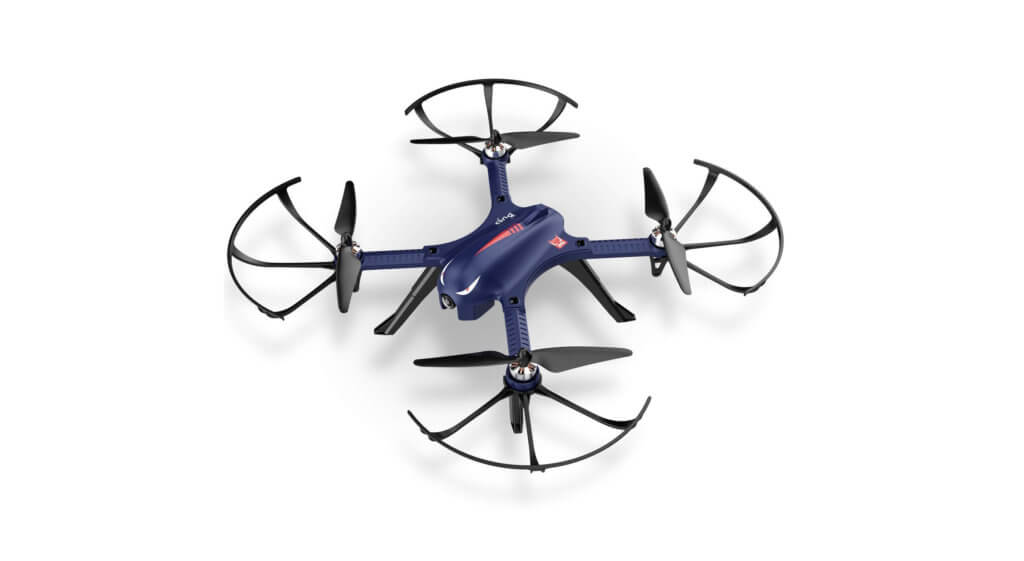 It never ceases to amaze me how drones are becoming easier to fly, more fully featured, and less expensive as the years go by. No longer solely coveted by RC enthusiasts, they now range from hobbyist units to business and military applications. Mainstream is the word here and that means there is now a drone unit out there to fit your budget while getting a reasonable photo and video quality, and the DROCON Bugs 3 definitely fits this description.

From vloggers to sporadic video enthusiasts, anybody can enter the drone market and pick up a unit which can give decent quality. It comes from the makers MJX who are long-time players in the radio controlled toys market. This drone is essentially repackaged for DROCON meaning that the Bugs 3 is an inexpensive, feature-rich drone which could be ideal for those on a budget or taking their first steps into the drone world.

This is a budget level drone, but the box includes everything you need to get off the ground and flying. Included is the drone itself, radio controller, landing gear, camera mount, spare propellers, charger, and tools to screw everything together. You can’t mistake the cool looking eyes on the front of the drone which does give it an air of a child’s toy, but also something you should be having a lot of fun with.

Specs-wise this is a brushless motor quadcopter design made from high-density pure nylon fiber. The drone is capable of lifting 230g of extra weight with a range of 300-500 meters and flight time of up to 18 minutes on a full charge. The motors themselves are MT1806 brushless motors powered by a 7.4V 1800mAh 25C Li-poly. The total weight without any camera attached is 485g.

The body design is made to take a lot of impact shocks and the propellers have their own guards. One debatable feature is the included camera mount instead of a built-in camera. Those who just want a bit of flying fun with a drone may miss an incorporated camera, but at this price point, it’s obviously going to be low spec.

Instead, DROCON has given you a camera mount which can fit a variety of GoPro-esque units instead. Some of these cameras are very budget-friendly, which means you can get high-quality aerial shots for a reasonable amount of money. This I feel is the right way to go, especially if you already own a GoPro or similar.

There’s a bit of initial screwing together of everything such as the landing gear and installing the propellers correctly, but once in place, you are ready to go. The controller has a bunch of intelligent functions for more automated flying and telling you when the DROCON Bugs 3 is going out of range. There are facilities for doing more stunt like work such as 3-D flips and rolling, with a simple layout including dual sticks, trimmers, high/low-speed switch, and a lock button.

As for the camera holder, you simply slot in a GoPro or something like a Xiaomi action cam and off you go. The drone has a reasonable range and can take on windy conditions very well. There’s also a very bright LED light on the front of the drone for low light flying. The controller has just enough facilities to keep everything stable and in check.

It’s all quite impressive, especially if you are new to drones and already own a GoPro with the thought always in the back of the mind of how much you are getting for a budget drone unit. However, the DROCON Bugs 3 doesn’t score perfect marks.

The controller has just enough facilities to keep everything stable and in check. It’s all quite impressive, especially if you are new to drones and already own a GoPro with the thought always in the back of the mind of how much you are getting for a budget drone unit. However, the DROCON Bugs 3 doesn’t score perfect marks.

There are features lacking in this drone. There is no altitude hold, no advanced stabilization or GPS features, and no extra batteries. The lack of a dedicated camera isn’t a plus point, but more a wise decision at this price point. If your aim is to capture photos and video, there is obviously the cost of the camera on top of the drone.

There are quite a few budget drones on the market, but for comparisons, we need to look at units which cater to an attachable camera. The Force1 F100 allows a GoPro compatible camera to be put in place and offers a very similar design to the DROCON Bugs 3. It offers less flight time, but there are other benefits like an extra battery.

In the competitive world of budget drones, the DROCON Bugs 3 has to offer a lot to sway buyers. On the whole, the drone is fun to fly, has no issues carrying a camera, and can move quickly when it needs to. You need to have a few backup batteries, but this is a small price to pay for the extended fun.

So who should buy the DROCON Bugs 3? The drone makes the most sense for those who already own a GoPro style camera and want something to provide cheap aerial shots. It’s also inexpensive enough to act as your first foray into flying a drone.

It doesn’t have some of the advanced features you will find on a more expensive drone, such as GPS, but this also gives you the freedom to throw the drone about if you have the space to do so. It’s also one speedy little unit.

If you don’t already own a GoPro and can spend a bit more money, then there are other options on the market. These can bring with them more advanced features like navigation assistance, advanced flight software, and sensors. Obviously, the more you pay the better the quality of camera with some models.

All things considered, the DROCON Bugs 3 is a fun drone to fly and a good choice as a first drone or a cost-effective unit for adding your own camera. Price-wise it’s definitely worth the money.

9
Score
The DROCON Bugs 3 is an inexpensive, fast flyer and is ideal as a first drone. It opts for a camera mount rather than a dedicated unit, so aerial shots require a third-party camera.