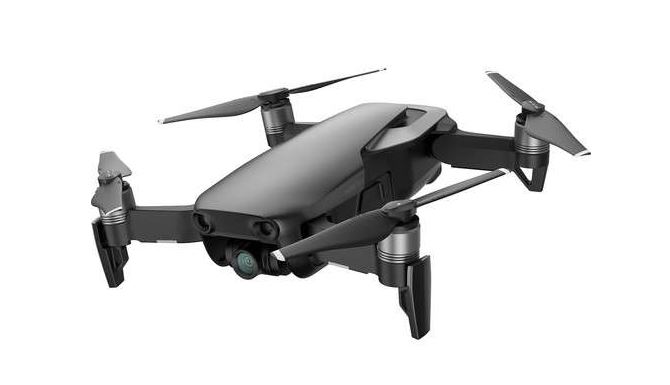 DJI’s Mavic Pro became popular for its portability. It was the first drone of its kind to have arms that folded against its body, making it super-tight. Since it was unveiled by the DJI, many others have fielded knockoffs with the same design, but it seems like only DJI can knock the Mavic Pro off its perch as our preferred camera drone. And it has, with the launch of the DJI Mavic Air.

Smaller and less expensive than the Pro, the Air also brings along the folding arms, the same 4K camera and gimbal as the Pro. A new object-avoidance mode has also been included to this new model that makes it even easier to operate in narrow spaces. So, it’s easy for us to say that it is the best camera drone yet.

The DJI Mavic Air resembles in shape with the Mavic Pro but smaller in size. Its sleek look with swooping curves makes it look like it’s flying, even when it’s on the ground. The Air’s four arms rotate outward from the main body for flight mode, like the Pro.

When folded, the Mavic Air is about 6.5-inches long and 3.5-inches wide. With the arms extended, the drone expands to about 7-inches wide, excluding its rotors.

At the front of the drone, its 4K camera and three-axis gimbal are installed, which is the same as on the Mavic Pro. Though, here, the camera is guarded on two sides by the drone’s body. On the Pro, the camera was more uncovered or exposed, so a clear plastic shroud was required to protect it during transport.

The Air is equipped with sensors that help it navigate through the environment around. Two forward-looking sensors are placed above the main camera, while the underside and rear accumulate two more sensors each.

The bulk of the bottom of the Air is taken up by its removable battery, where you can see, how much charge it has, by checking four of its lights.

The DJI Mavic Air’s controller is similar to that of the DJI Spark drone. It has two arms that extend from the main body and hold your smartphone in place. It’s great that the Air’s controller now uses a physical cable to communicate with your phone while in case of the Spark, first, you needed to pair your phone wirelessly with the controller and then with the drone. It was a minor extra step but really annoying.

Otherwise, the Air’s controller is mostly the same: two joysticks are used to control altitude and motion. You can rotate the camera, and take photos and videos with the shoulder buttons. Other buttons on the face land the drone, engage Sport mode and turn the controller on and off. Everything is placed well. Anyone who has been using a PS4 or Xbox controller will have no problems sorting out how to handle the Air’s version.

The controller sticks for the Air can be detached and stowed in the body of the controller, which is another nice touch and makes it much easier for you to carry around.

If you need to skip the controller completely, the Mavic Air, like the Spark drone, can be controlled using nothing more than hand gestures. You can launch the Air, move it right, left, up and down, and capture stills and videos.

Although in this mode Air’s range is limited only to about 20 feet, since your palm and hand gestures need to be clearly viewed by the camera.

DJI says that the Mavic Air should stay in the air for about 21 minutes, and it was found to be close to their claim. It is only a few minutes behind the Mavic Pro, and certainly a fair trade-off, given the reduced price of the Air. The drone ships with a single battery, which you can easily swap out; extras will cost about $79 each.

Just like all of DJI’s drones, the Mavic Air was an amazingly easy drone to fly. It hovers well in all but very strong wind gusts and zips around effortlessly. The app also warns you if it is too windy.

A new feature called Advanced Pilot Assistance Systems (APAS) has been added to the Air. It will cause the drone to automatically fly around the objects, such as trees, bushes, etc. When that feature is activated, the flying speed of the Air reduces a bit than usual, but APAS works well. It was found to be more helpful especially when the drone flew through the wooded areas. However, the Air doesn’t come back to its original course after dodging an object. You’ll have to reorient it manually.

In Sport mode, the Mavic Air accelerates. According to DJI, it can fly with the speed of up to 48 miles per hour. It cannot be confirmed, but the drone covered the approximate length of a football field in about three seconds.

As it comes with the same 4K camera and three-axis gimbal as the more expensive Mavic Pro, stills and videos captured with the Mavic Air were great.

The camera did an incredible job adjusting to various lighting conditions. In one scenario, the drone was launched at dusk, facing the setting sun. As it rose into the air, the Mavic Air kept the houses in the darker foreground properly lit, while it was still showing off the rosy hues of the sun. There was a bit of noise noticed in the darker areas, but it’s to be expected.

It takes a little longer to save 4k videos than lower-resolution files. After you stop recording, the Air would often take almost 10 to 15 seconds to complete processing what it had just captured.

In HDR mode, the DJI Mavic Air can capture a series of three images at different exposures and merge them into a single shot. You will also like that the drone stores each photo individually, so you can use a photo editor to adjust the HDR yourself.

As with the Spark, the Air has some autonomous flight modes, called QuickShots. Using these modes, you can capture some pretty dramatic videos. The two newest, Asteroid and Boomerang, are wildly popular; Asteroid has the drone fly up to a preset altitude and capture 360-degree images and then it integrates them with a video as it flies down to you.

You will get pretty granular controls over the camera through the DJI app. It will let you adjust exposure, shutter speed and more. However, it was a bit annoying to go through menus to find different features such as the panorama or spherical mode for the camera.

When the Mavic Pro was introduced, we thought DJI had made the best drone ever. But with the Mavic Air, it’s once again proven that it can make a drone that’s the envy of all others.

The Mavic Air is portable, maneuverable, takes amazing photos and videos, and bags a number of great features, such as the automatic camera modes, gesture recognition, and object avoidance. It costs a couple hundred less than the Mavic Pro, yet offers almost all of the same features. If you’re searching for the best all-around consumer drone, the DJI Mavic Air will fly you right.

9
Score
Smaller in size, more compact, and cheaper than its predecessor, the DJI Mavic Air still comes with the same great camera and some incredible features that make this drone even better.