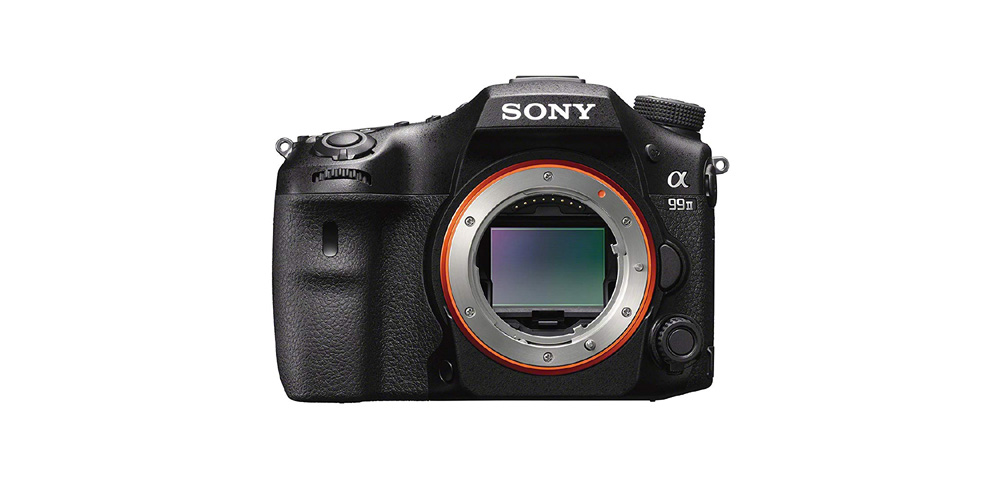 The Sony a99 II is the latest pro-level full-frame camera that features an SLT (Single Lens Translucent) design. It uses a translucent mirror, which helps achieve faster frame rates. The camera comes equipped with a 42-megapixel full-frame sensor, Bionz X image processor, tilt-angle LCD screen, an electronic viewfinder and has dual memory card slots. The a99 II supports 4K video recording and makes use of Sony A-mount, which allows you to attach a range of lenses with the camera.

The Sony a99 II is a full-frame DSLR camera that is designed for expert shooters and its surface is covered with a huge number of dials and buttons. It has a chunky grip that provides you enough room to fit your hand on it comfortably, with the index finger placed on the shutter release control. Both the grip and the body of the a99 II are textured with a finest-quality coating. The camera is solidly built and feels quite durable. It’s weather-sealed, which makes it quite suitable for outdoor shooting. It also features dust resistance.

The a99 II is smaller in size than the older a99. Physically, both cameras look almost the same and it’s great that the new model brings along the same positive experience.

On the left of the top deck there is a mode dial, which has PASM settings and a fully automatic mode. It also allows you to set up to three groups of custom settings. Movie mode and a panoramic mode are also included. On the right side of the top panel, you will find the on/off switch, which is around the shutter release.

A monochrome LCD display is also included that helps you quickly check your settings. Next to it are the buttons for drive mode, white balance, exposure compensation, and ISO settings.

There is a three-inch fully articulated screen on the back of the camera, with 1,229k dots of resolution. The electronic viewfinder provides full-frame coverage and has 2,359,296 dots. Both offer great quality but the LCD lacks touchscreen functionality, which can be frustrating for some users. Other traditional controls surround the screen, such as a command dial, a joystick used to move the autofocus point, and a button for movie recording.

Dual SDXC card slots can be located on the right side of the camera. However, Sony didn’t include the XQD card slot like its rival Nikon that has equipped its D500 and D5 DSLRs with this format. It’s probably there is less room on the camera’s small body to accommodate such a large-sized card.

On the left side, the a99 II has a mic input, HDMI port, flash sync port, USB 2 port, and a headphone jack. Given the size of the 42-megapixel RAW files, Sony should have included the USB 3 port here,  but this shouldn’t be an issue if you have an external card reader. As for the videographers, they would love to see the headphone jack.

The 42.4-megapixel sensor of the a99 II produces excellent quality images. It outputs JPEGs with an average size of around 15Mb.

The native ISO range of the camera is 100-25,600, but it can be expanded to 50-102,400. Its high-resolution sensor does quite an excellent job and picks up the fine detail, especially at low ISO settings. For instance, at ISO 100, you get images with extremely fine detail. Overall detail is well maintained throughout the sensitivity range but as you go into higher ISOs, such as at ISO 3200, images start appearing more painterly.

Images taken at ISO 51200 are usable if their size is kept small or if you need small-sized prints, but it would be great if you don’t go above the ISO 12800 or keep it below this setting if possible. The maximum ISO 102,400 absolutely isn’t recommended because there you will get the results with a lot of noise or loss of detail.

The Sony a99 II also features an image stabilization system that has a 4.5-stop corrective strength. It helps you avoid blurry effects in images and delivers improved results in low-light situations.

The a99 II is the company’s first full-frame camera that employs a fast and high-precision 4D Focus AF system. It pairs a 79-point dedicated phase-detection autofocus sensor with a 399-point focusing system on the imaging chip itself. It delivers outstanding performance and accurately focuses on a variety of still and moving subjects. The 79-point AF sensor would help capture action shots, while the 399-point on-chip focusing system provides wider coverage.

The battery of the a99 II is only rated at 390 shots on a single charge, which is quite low if compared with the Canon and Nikon models. Even the Nikon D5600 is rated at 970 shots, which is an entry-level camera. However, this downside is because of Sony’s SLT technology. The electronic viewfinder of the a99 II would constantly consume power, whereas an optical viewfinder on a traditional DSLR is much more power-efficient.

How Does the Sony a99 II Compare?

The Sony a99 II is a clear winner if compared with the older Sony a99. Its sensor, autofocus system, image quality, low-light performance, frame rate, and numerous other features have been improved, plus it has been loaded with tons of new and high-tech features. Their comparison in more detail is provided in the below table.

The Sony a99 II is an amazing camera aimed at professional and enthusiast photographers. It comes equipped with high-end features and performs exceptionally well in almost every department. The image quality is excellent and it has an AF system like no other. Sony’s SLT technology helps the camera achieve a great frame rate, which helps shooting sports and action scenes.

9
Score
The Sony a99 II is a professional full-frame camera that has a lot to offer. It’s a very capable shooter equipped with Sony’s advanced technology and is definitely worth a look.