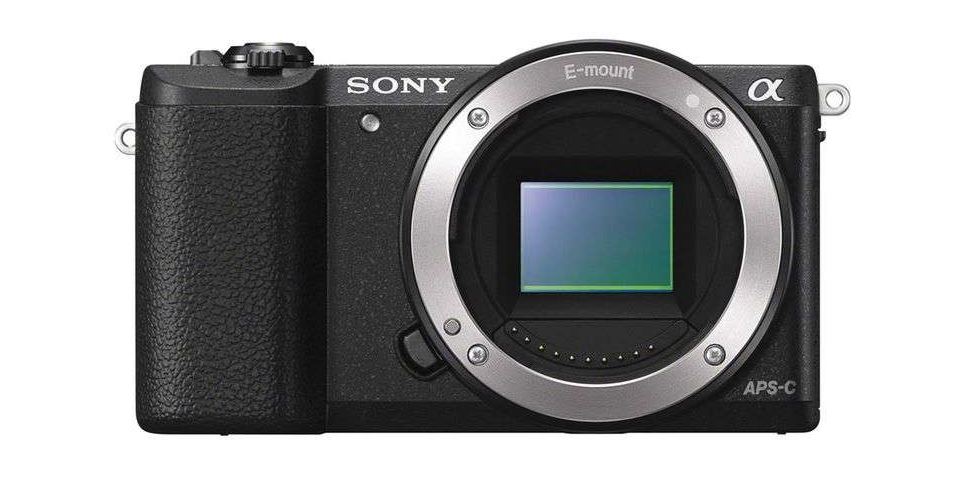 Sony has replaced many of the cameras that used to be branded with the NEX moniker, and so the a5100 has replaced the NEX-5T. Although the camera has the same shape as its predecessor, Sony has installed the same excellent 24.3 million pixel sensor and Bionz X processor as used in the a6000.

This gives the new camera a great coverage and only the outer edges of the image frame are not covered. Focusing speeds are claimed to be 0.07 seconds, which makes it slightly slower than the a6000 and Fuji X-T1, which (with 0.06 second AF speeds) are known to be the fastest focusing APS-C system cameras available on the market.

The Sony a5100 has the APS-C sized sensor, but it comes with the same gapless on-chip lens structure as the a7R. Therefore, it would be able to capture more light and perform better in low-light shooting conditions.

In addition to single AF and continuous AF, the a5100 has an Auto AF mode feature which you can select to decide whether to use single or continuous AF, depending on whether it detects the moving subject. It can shoot at the rate of 6fps.

You can operate this hybrid AF system in Movie mode and save the footage in AVCHD, XAVC S and MP4 format, or in XAVC S and MP4 simultaneously. This enables you to easily share MP4 with the high data content of XAVX S.

The a5100 has a 3-inch 921,000-dot LCD screen like the one provided with the NEX-5T. It is touch-sensitive and you can flip it up through 180 degrees for taking selfies. However, touch-control is again fairly limited and you can only use it for setting the AF point or tripping the shutter.

Despite the increase in pixel count, the sensitivity range also remains the same at ISO 100-25,600. This has been made possible by the new processing engine.

The NEX-5T included a hot-shoe with an accessory connection but it had no pop-up flash. On the other hand, the a5100 has a pop-up flash but no hot-shoe option available.

The Sony a5100 has both NFC and Wi-Fi connectivity like the NEX-5T, and is made compatible with PlayMemories apps. Users can download them from the PlayMemories store directly from within the camera.

You can directly upload images to Facebook and other social media platforms if the appropriate app is in place. Using your phone or table, you can also control the camera remotely and send images to a device for online sharing.

The a5100 brings along a 16-50mm f/3.5-5.6 power zoom lens – this means that you will be able to zoom in from a switch placed on the camera body itself. There’s a wide range of lenses for Sony cameras now available for you, both directly from the manufacturer or through any other manufacturers like Sigma. Sony has also collaborated with ZEISS to produce a few extra high-quality E-mount lenses.

The Sony a5100 can be placed at the beginner end of Sony’s range of interchangeable lens cameras, so its existing rivals can be the Olympus Pen Mini, Panasonic GF6, Samsung NX3000, and Fuji X-M1.

With the same processing engine and sensor, we can say that the Sony a5100 would certainly deliver the same excellent results as the a6000. It’s probably fair to say that the main difference between these two cameras is handling, not performance.

Colors from the camera are bright, natural, and vibrant, and display a good level of saturation. By altering Creative Style, you can adjust the colors outputted directly from the camera. Here you’ll find several options such as Portrait, Vivid, Landscape, and Black and White. Each of these is customizable. For instance, you can increase the contrast and shoot these styles in RAW.

The 24.3MP sensor provides a great level of detail. This is true when you particularly look at an image of normal printing or web sizes. The impression of detail is still impressive even if you zoom in at 100 percent; it gives you good scope to crop an image.

The metering system of the Sony a5100 manages to produce accurate exposures in many of the cases, however, in some very high contrast situations, you may observe that it is beneficial to dial in some exposure compensation.

The Dynamic Range Optimizer (DRO) function is also very useful as it can assist you to get a balanced exposure in scenes where some area is brighter or darker than the rest of it. You can choose from five levels or leave it on the camera to select the appropriate level automatically. Perhaps, shooting at DRO level 5 should be avoided as the scene looks a little fake but the other four levels are truly handy.

The camera’s automatic white balance also does a good job of producing accurate colors in most of the cases. But in some situations where there are two different types of light in a scene, it’s unlikely that you will get a wholly accurate overall image. You will probably want to switch to a more appropriate white balance setting if warm tones turn out to be displeasing for you.

Sony claims that one of the benefits of the new Bionz X processor is its ability to deliver great results in low-light shooting conditions. Interestingly, the Sony a5100 performs very well at high sensitivity settings – for instance at ISO 3200, the overall impression of details is excellent and with very low noise. If you zoom in at 100 percent and examine some areas of the image, it will have a slight painterly effect, but the overall detail is kept quite well.

If you analyze the RAW format and a JPEG image side by side, you will see how awkward the camera’s in-noise reduction is. Using Sony’s RAW data converter software, you can alter your own level of noise reduction. This can be handy if you would like to keep detail rather than smooth out noise.

There are several Picture Effects that you can experiment with to get creative. You can only shoot them in JPEG format but still, they are worth using to see if the pictures look attractive. High Contrast Monochrome and Toy Camera add some great effects to the image, but it solely depends on the user’s choice.

Here Sony didn’t give us the option to shoot in RAW but it would be great to see them coming with the new Alpha models.

The performance of the kit lens is impressive. It produces images with sharp detail and in terms of focal length, it offers plenty of flexibility. If you have plans to acquire any more lenses for the Sony E-mount, you will find a decent number of them available on the market. A great option is the 50mm f/1.8 lens, which delivers amazing results if you are shooting in low-light conditions, or shooting shallow depth of field images.

General functionality and autofocus of the a5100 is fast, thanks to the Bionz X processor. Although, it won’t be able to deliver as quick as the a6000 but under good lighting conditions it locks onto the target easily and quickly.

The Sony a5100 is another decent and well-performing camera system that Sony has successfully produced. It may not be as exciting a compact system camera as the other competitors out there on the market, but it does offer a wide range of functions and features that can attract many people. The Sony E Mount system has also become a popular and well-established system, so it’s a good option to get started with.

8
Score
The Sony a5100 would make an excellent camera system, especially for those who love to travel because its small size and light weight allow you to carry it around easily, and also it packs tons of features and can produce fantastic stills.